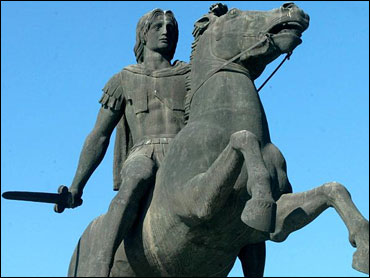 Archaeologists in northern Greece have unearthed a monumental ancient tomb, believed to be the largest of its kind ever found in Greece, in Pella, the capital of the ancient kingdom of Macedonia and birthplace of Alexander the Great.

The eight-chamber tomb, dated to the Hellenistic Age (between the fourth and second century B.C.), was accidentally discovered by a farmer ploughing his field on the eastern edge of the ancient cemetery of Pella, some 370 miles north of Athens, archaeologists said.

The discovery was confirmed Friday by a senior archaeologist responsible for the Pella site and will be presented at an Archaeological Conference in Thessaloniki on Feb. 16-19.

Entered by a 53-foot path, the 678-square-foot, rock-hewn tomb is significantly larger than any other found in Greece. Multi-chamber tombs found until now do not contain more than three chambers.

"This is the largest and most monumental tomb of its kind ever found in Greece," said Maria Akamati, the leading archaeologist at the site.

Archaeologists believe the tomb, filled with dozens of votive clay pots and idols, copper coins and jewelry, will shed light on the material culture of the ancient kingdom of Macedonia in the period that followed Alexander's conquest of Asia.

The Macedonian general's empire, which stretched from Greece to Asia, was violently fragmented by his generals into separate kingdoms upon his death in 323 B.C.

The tomb, believed to have been used for two centuries, was probably plundered in antiquity as most of the artifacts were strewn by the entrance to the chambers, Akamati said.

The complex is dominated by a central area surrounded by eight chambers plastered with red, blue and gold dyes. Three inscribed stone steles inside the chambers still bear the names of their female owners, Antigona, Kleoniki and Nikosrati. A relief on one of the steles depicts a woman and her servant.

Similar tomb types, and dated to the same era, have been discovered on Crete, Cyprus and Egypt, which was ruled by a Greek dynasty founded by Alexander's general Ptolemy.