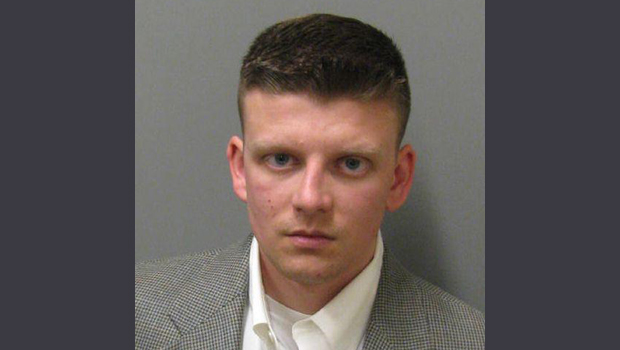 MONTGOMERY, Ala. -- An Alabama police officer has been charged with murder in the shooting death of a black man outside a neighbor's home.

Bailey said Smith, 23, is in custody, with bond set at $150,000. He wouldn't comment on what evidence led to the charge. It was not immediately clear whether Smith had a lawyer who could comment on his behalf.

Authorities initially said Gunn was holding a stick or cane and the two men had struggled. But a neighbor of Gunn tells The Associated Press the stick was actually an extension handle for a paint roller that belonged to him.

"He didn't have anything, other than the cane they was talking about was my paint cane laying right there. Been there two or three weeks," Colvin Hinson said Wednesday.

Protests have been held throughout Montgomery since the shooting, CBS affiliate WAKA reported.

"You were telling 17, 18, and 15-year-old black boys that they can't walk in their neighborhood at three and four o'clock in the morning without having to be charged with a looks suspicious," civil rights activist Jamel Brown told the station. "No, we've got to change that type of dominion -- we want to bridge the gap between the police agency and the black community in Montgomery."

Bailey said he believes Gunn's death is an "isolated incident," and asked the community not to criticize the city's police department.

"I want to be crystal clear that the arrest that is being made today is in no way an indictment on the Montgomery Police Department," Bailey said. "In fact, 99.9 percent of the Montgomery police officers do an exceptional job on a daily basis protecting us and our community. They are, in fact, the thin blue line between order and chaos."

Bailey said the State Bureau of Investigations will continue to investigate the case, and all findings will be presented to a Montgomery County grand jury.

Gunn's death comes amid a national conversation about law enforcement's use of lethal force in minority communities, after multiple cases of black men dying at the hands of police.