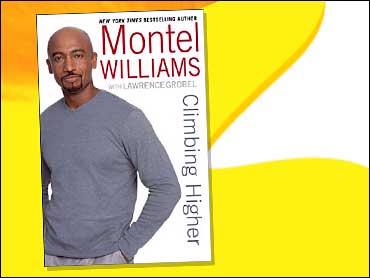 But he was forced to reveal his own problems - a battle with multiple sclerosis - to pre-empt a 1999 story in the tabloids.

In his new book, "Climbing Higher," Williams writes that he had been struggling with MS symptoms for years but it wasn't until a painful episode while shooting the CBS television show "Touched by an Angel" that he was finally diagnosed.

It is at this point that Williams invites his readers into an intimate account of suicide attempts, intense pain, medical procedures, sexual dysfunction and family problems - all attributed to or aggravated by MS.

He tells The Early Show co-anchor Hannah Storm MS is an insidious disease with as many symptoms as people who suffer from it. He says, "All of us suffer differently. I happen to have the one considered extreme neuralgic pain in my lower extremities. That means from my knees to my feet, it hurts every day 24 hours a day."

Though people may think that MS makes him weak, Williams says nothing can be further from the truth. "In this country, we look at illness as if it's weakness. I may be ill but I am for damn sure not weak by anyone's stretch of the imagination. I work out every day and do everything to counter balance the negative effects, but I'm ill."

Have No Fear Of African Violets

He works out at the gym every day and adds, "I have not missed a day of work or one appointment or one thing that I have to do because you have to figure out a way to deal with it."

Another way he has dealt with the pain has been via painkillers. In his book he also reveals his marijuana use.

He says, "I spent 22 years in the service supporting, defending our Constitution of the United States, I fought in the war against drugs. I want to tell you right now in this country, we need to start thinking about compassion."

He proposed changing marijuana from class 1 drug to class 2 drug. He points out, "How dare someone tell me they can prescribe morphine, vicodin, percocet. Make the drugs most addictive, name the most addictive drug, they can give me and I can be a walking member of the society by taking that garbage, but my doctor, who has prescribed it for me, can't prescribe medicinal marijuana? Why? Because we have an idea everybody who does it sits around smoking. There are 50 different ways to utilize it. You can eat it; you can process it into a liquid; or you can turn it into a pill form. The willow tree was taken apart about 200 years ago and turned into aspirin. And we all take it."

About his suicide episode, he says one of the side effects of the medication he was taking caused him to be depressed, spiraling into an abyss because of his pain.

Williams says, "I thought if I made it look like an accident, then I could rest in peace and everyone could go on. Then I realized how stupid that was because of my love for my kids. They got me up off the street and made me realize I need to deal with it.

"So many people look at so many of us who walk around every day and look successful and think there are no problems. I had a woman in the airport come up to me and say, 'First of all, thank you for what you do for MS. But I got to tell you, you make us look bad because my husband said, why can't you do as good as Montel.' I stopped and thought about it. Maybe I should start telling the truth and let people know how really I am doing. I live 100 percent of my day every day, but it's not easy," Willians notes.

According to the actor/author/television host, it was his ability to overcome discrimination and his military training that gave him the strength to finally do what he had been preaching to others: face challenges, and climb higher.

He says, "There are so many people out here who are suffering with different illnesses like myself in different ways and don't have anybody to talk to and can't really communicate and get it out. So I wrote this book to kind of see if I could bridge the gap between those of us who suffer and those who love those who suffer."

Read an excerpt from his book:

For six weeks after my diagnosis, when I wasn't on camera I was crying. At night, I was twitching so much I couldn't stay in bed. It felt like I was walking across hot coals just to get to the bathroom. All my thoughts were negative: my job was over, I couldn't perform in the bedroom, my wife was leaving me. I sat around all day thinking everyone was going to find out; people were going to laugh at me; or they were going to avoid me because they'd think the disease was contagious.

The voice in my head was never quiet: "I'm going to be left alone; my kids are no longer going to want to see me; they'll have to push me around in a wheelchair." I didn't want them to see me like that. I didn't want to be a burden on anybody. I buried myself in my work so I didn't have to be around anybody. I avoided talking to people, to Grace, my kids. I just tried to avoid human contact. I spiraled into cataclysmic depression.

I eventually stopped going to the gym. I couldn't pull weights. My brain would signal "pull" but my left arm couldn't do it. It was just a mess. I was an emotional wreck. I wasn't eating; I went from over 200 pounds down to 176 in a little over a month. I was worried beyond belief.

What was there to live for? My marriage was on the rocks; my body was either numb or on fire and it was only going to get worse. Whatever was going on with my immune system was messing with my brain chemically and making me depressed. I was still swallowing percocets and vicodins trying to lessen the pain I was in. I had no appetite for food, sex or conversation. I didn't want to see my friends or family. I couldn't work out. My staff was in dissension. I was hiding my disease from everyone. I felt alone, hopeless, and sorry for myself. I just kept talking myself into the vortex that was sucking me down further every day. On multiple occasions I told Grace she should leave me. I didn't just have low self-esteem - I had no self-esteem.

But what I did have were guns.
A lot of guns.
Nine guns. All registered. All legal.
Nine choices to blow my brains out and end the misery I was in.

Grace was in Los Angeles trying to get some acting work and my mother-in-law was staying at our house in Greenwich, Connecticut, with Montel and Wyntergrace. Ashley and Maressa were with their mother, my first wife. I decided to spread some towels on the floor of our bedroom closet and clean my guns. At least, I wanted to make it appear as if that was what I was doing when they found me there.

Excerpted from "Climbing Higher" Copyright© 2004 by Montel Williams, Lawrence Grobel (Contributor) Excerpted by permission of New American Library. All rights reserved. No part of this excerpt may be reproduced or reprinted without permission in writing from the publisher.