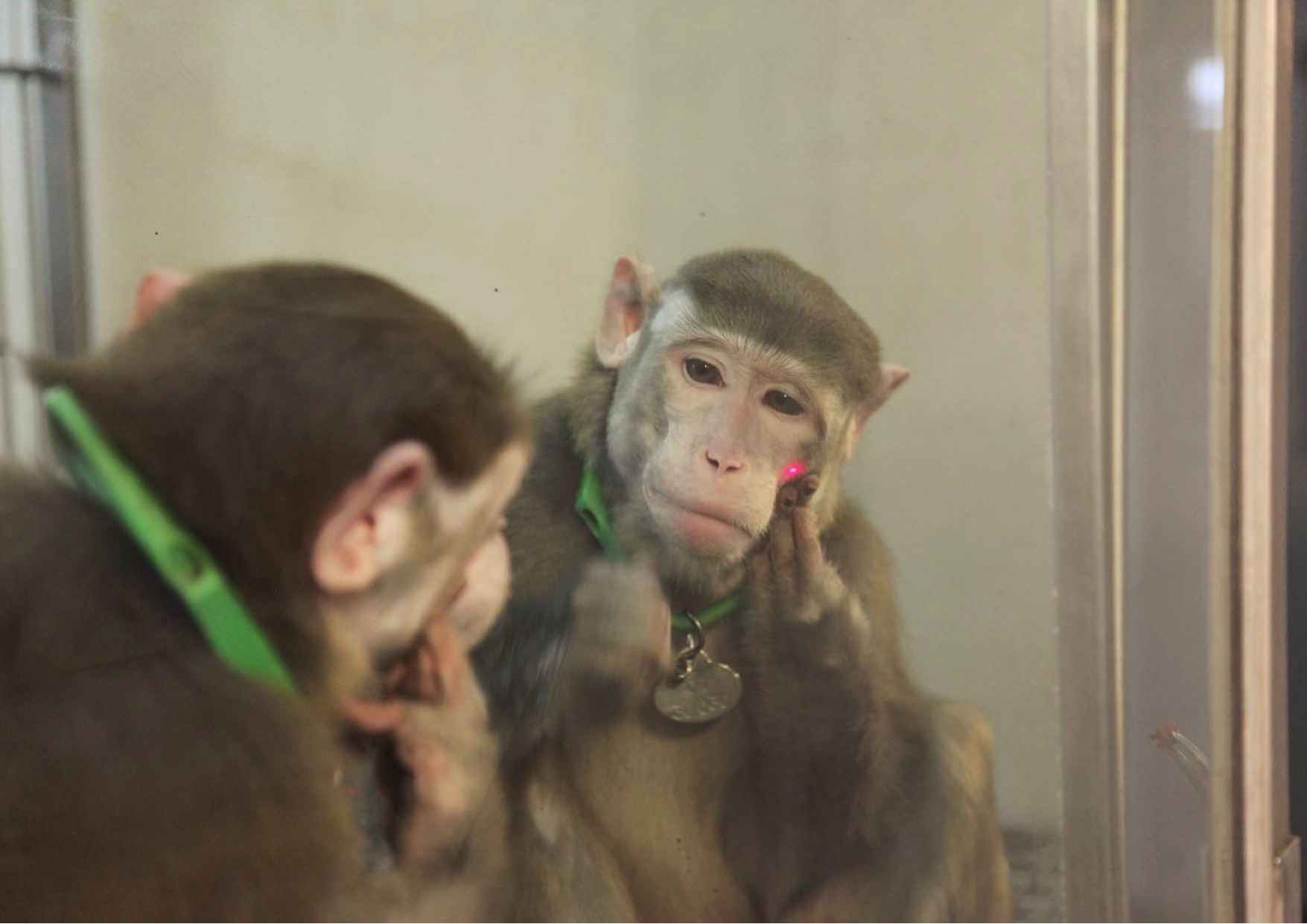 Humans and great apes are fond of gazing at themselves in the mirror. Not so with rhesus monkeys, who just see another monkey or, worse, a possible rival.

But over time and with some training, these monkeys showed they can recognize their own image - and, like us, seem to enjoy spending time in front of the mirror, looking curiously at their reflection and even checking out their backsides.

"Monkeys are even smarter than we thought," Neng Gong, of the Chinese Academy of Sciences, who co-authored a study out Thursday on the monkeys in the Cell Press journal Current Biology, told CBS News.

"Our findings suggest that the monkey brain has the basic hardware, but needs an appropriate training to acquire the software to achieve self-recognition," he said. "Self-awareness is related to many other higher brain functions, especially social abilities."

Gong said their study could also help further explain why humans and great apes, including gorillas and chimpanzees, have evolved higher brain functions such self-awareness as well as social behaviors like sympathy and empathy, while lesser species like the Rhesus monkeys have not.

"Understanding the neural basis of self-awareness and consciousness is the ultimate goal of understanding the human brain, and this has been a very difficult subject for experimental studies," he said. "By demonstrating that self-awareness-like behavior of mirror self-recognition can emerge in monkey after training, we now have an animal model to study what neural circuit changes that enable the emergence of self-awareness."

Koji Toda and Michael L. Platt, in an article that accompanied the study, said the finding "closes a prior gap in the evolutionary continuity of animal cognition and opens new frontiers for exploring the neurobiological basis of self-awareness."

The authors "deploy a clever new technique to reveal that rhesus macaques are capable of recognizing themselves in a mirror, passing a hallmark test for self-awareness they had failed in previous studies," they wrote. "The technique developed by (the authors) opens new avenues for neurobiological exploration of the biological mechanisms mediating the sense of self in non-human animals. In so doing, we may come to know ourselves better as well."

Scientists have long put rhesus monkeys in front of mirrors but with mixed success. The monkeys were able to learn to use the mirrors to observe other objects but never recognized themselves - until now.

"Mirror self-recognition in monkeys is one of the most important questions in the comparative cognition, and has been extensively searched for so long time, but with so little success," Gong said. "We wanted to try something new to explore this question."

So, the researchers this time sat the monkeys in front of a mirror and shined a laser light on their faces. They were rewarded with food when they touched the illuminated area. After two to five weeks of the training, the monkeys had learned to touch face areas marked by a spot in front of a mirror. They also noticed virtual face marks in mirroring video images on a screen.

But Richard Byrne, a research professor at the St. Andrews University's School of Psychology and Neuroscience, said monkey's success on what is known as the "mark test" didn't necessarily indicate the monkeys are any smarter - only that they can be trained to do things we can do.

"So, to me, extensively training animals like rhesus monkeys or feral pigeons to 'pass' the mark test, as if it was a sort of IQ test, rather misses the point," Byrne said in an e-mail interview. "The finding that these monkeys react 'as if' they had understood that it was themselves they saw when they looked in a mirror, after extensive training, doesn't change my views of what monkeys are capable of understanding, though it is impressive to see that they can be so trained."

Once back in their cages, the researchers showed that five out of seven of the monkeys continued to demonstrate behavior that would have been inspired by a mirror such as touching a mark on their face or ear and then smelling their fingers as if to say "Hey, what's that there on my face?"