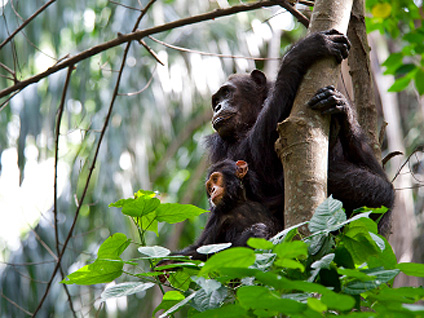 Having your mother constantly watching your back may not be a sexy trait in human males, but in some primate species, mom rules the roost and her presence may help her sons hook up with eligible females, a new study suggests.

The female-ruled society of the muriqui monkey in Brazil is egalitarian and peaceful, the researchers say. The group's reproductive success, it seems, is spread evenly across the males of the group instead of being determined by male dominance, as it is in many other species.

"The new data show who's pulling the strings in muriqui society," study researcher Karen Strier, of the University of Wisconsin-Madison, said in a statement. "It's the mothers." This means males don't need to fight for dominance and territory, saving the muriqui from the warmongering habits of other primates.

The northern muriqui is a large, long-lived, socially complex and critically endangered New World primate. There are, at most, 1,000 animals left in patches of the Brazilian Atlantic Forest, the only place the species is found.

The study looked at genetic data collected from feces of 67 monkeys, a sample that included 22 infants, their 21 mothers and 24 possible fathers. The researchers were then able to figure out the relationships between each of the monkeys.

The genetic results match up well with decades of behavioral studies on this group of monkeys, showing that long-lived mothers stick around for the benefit of their sons. Males stay with their maternal groups for their entire lives, while females tend to migrate to different groups after they reach 6 years old.

"We knew from long-term behavioral studies that mothers, who can live into their thirties, stay with their sons for a lifetime," Strier said. "But the unexpected part of the story is that there may be reproductive advantages as a result of this living arrangement."

The researchers saw that the sons in the mother-son pairs who were physically closest were also the males that had the highest reproductive success. However, they didn't observe these mothers actively intervening in their son's sexual advances, unlike mother-meddling of the bonobos.

It's possible that this genetic advantage from a motherly presence could be why females tend to live long past their reproductive years in many primate species, including humans. "It would be really interesting now to look at paternity in other muriqui populations and in other species where mothers and sons stay together for life, to see if there are similar maternal effects," Strier said.

Another interesting characteristic of the monkey's society is how many males participate in mating. In many primate societies, access to mates is controlled by a dominant male. For the muriqui, many of the males are able to participate in mating, and no one male is dominant. The most successful male in this study sired only four of the 22 baby monkeys. A dozen other males also participated in the breeding of the group.

"What we see is that no one male is monopolizing reproduction," Strier said. "The pattern is that a lot of different males are siring infants, confirming what we had predicted from their behavior."

The study was published Monday in the journal Proceedings of the National Academies of Sciences.