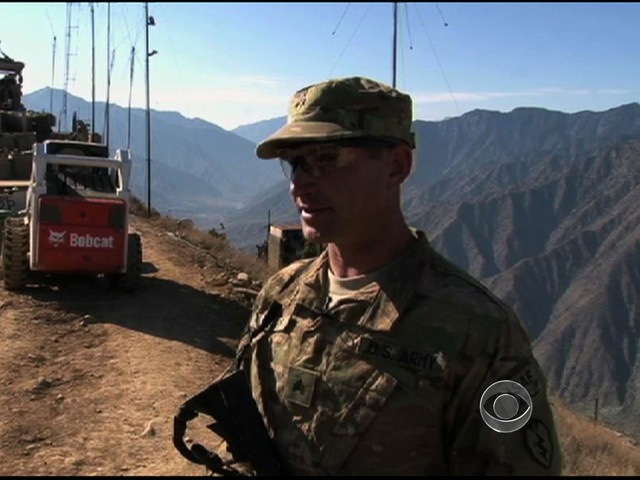 The Afghan government Monday signaled that it may be open to peace talks with the Taliban. In the meantime, Taliban fighters keep slipping back and forth across the border with Pakistan. American soldiers are on a mission to stop them and CBS News correspondent Clarissa Ward spent time with one squad on a remote base in a mountainous border region.

Sgt. Eric Scharf knows the importance of discipline as squad leader at a tiny outpost of just 19 soldiers overlooking the dangerous Pakistani border. His men are the eyes and ears for key U.S. bases below, trying to keep them safe from insurgent attacks.

Perched at 7,000 feet, it doesn't get much more isolated than here. The stunning scenery provides abundant hiding places for an enemy the men rarely catch a glimpse of.

In Afghanistan, Christmas on top of the world

Normally by December these mountains would be covered in snow. But this year has been unseasonably warm, which means that enemy fighters from Pakistan have been able to come down and move freely through the mountain passes.

Scharf relies heavily on the expertise of his Afghan guards, who have been fighting in these mountains for more than 30 years and who monitor Taliban chatter.

"Through our monitoring of radio traffic and things like that, Pakistan is playing a huge role's in the insurgency's ability to freely move about," said Scharf.

Less than 36 hours after CBS News arrived, a nearby outpost came under enemy attack. The men were instructed to fire off mortars at suspected enemy positions to hold off the attackers. It was a reminder that the enemy can strike at any time.

"I know that the moment I slack off is the moment that one of my guys could catch a bullet in the head," said Scharf. "That's the main thing -- [it's] just encouraging them to try to understand their enemy, to learn about the fight and to be ready at any given point."

Ready for an enemy that takes refuge on both sides of a porous border.