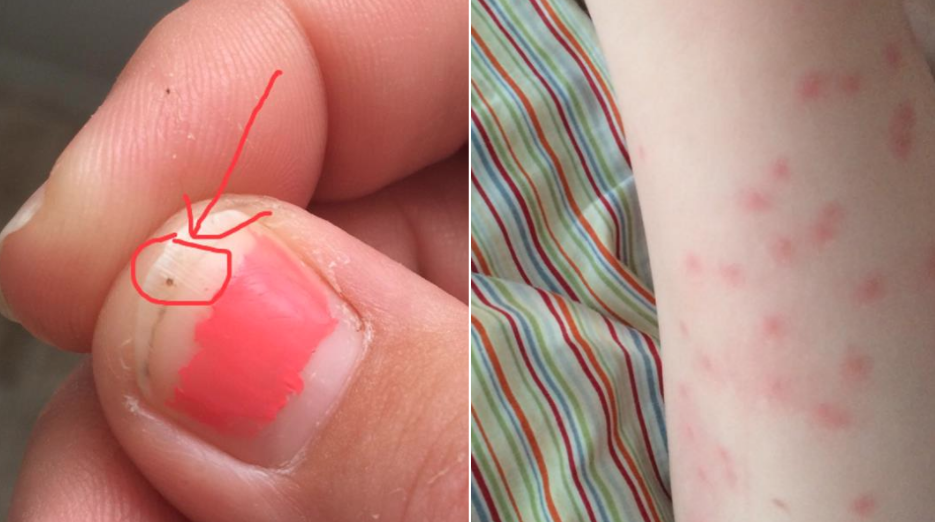 A concerned mom is warning people across the country about a dangerous pest people need to be on the lookout for this summer — one so small it's often mistaken for a speck of dirt.

It's called a seed tick, the larval form of a tick, and it can be found in groups of thousands.

On a hot summer afternoon, 3-year-old Emmalee was playing in a backyard sprinkler to cool off. Her mom, Beka Setzer, of Meigs, Ohio, called her inside to take a nap. When she started changing her daughter's damp clothes, she noticed hundreds of tiny black dots up and down her legs.

"I just quickly assumed it was grass seed," Setzer told CBS News. "It wasn't until I tried brushing them off with my hand that I noticed they weren't coming off, and upon much closer inspection I noticed they were actually tiny bugs that were attached to her skin."

"I stopped bothering to count the attached ones after they surpassed 150, but I easily pulled 50 or more off that were not yet attached but instead still crawling," Setzer said. "It was when one was crawling around on my finger that I finally recognized them as ticks — and I mean tiny ticks."

After successfully removing all of the ticks from the little girl's body, Setzer repeatedly bathed her daughter in dish soap and administered Benadryl to alleviate any upcoming allergic reaction. She then found the nest of seed ticks where her daughter had been playing and used a topical insecticide on the entire area to kill the critters.

But Emmalee wasn't in the clear just yet.

The next morning, Emmalee was covered in small red welts, a reaction from each individual bite. She had a fever, was lethargic and had a large swollen lymph node. Setzer immediately rushed her to the emergency room, where she was tested for Lyme disease.

The test came back negative, but doctors didn't want to take chances. "Right away she was started on what ended up being almost two months of antibiotics in attempt to prevent any tick-borne illnesses," said Setzer, adding that she bagged up some of the individual ticks to get them analyzed and tested for Lyme. "The biggest thing that resulted from this, was a cyst that formed along the growing and continually swollen lymph node had to be surgically removed as the size and location in her throat became worrisome."

The terrifying ordeal happened last July, but Setzer is re-sharing her warning ahead of "tick season," which experts say could be "particularly bad" this year. More than 564,000 people have shared Setzer's story on Facebook.

"I hope to open other parents' eyes as to all the size of ticks they should be checking for — not just the more commonly seen adult ticks, but these larvae ticks ('seed ticks') as well," Setzer said. "I had only ever experienced adult ticks of several different breeds and had never encountered a nest of ticks in the larvae stage, so it's certainly a learning experience."

Emmalee will need to be tested for Lyme disease for several years, Setzer said.

About 300,000 people in the United States are diagnosed with Lyme disease each year, according to the Centers for Disease Control and Prevention.

While nowhere near as prevalent, another tick-borne disease called Powassan virus carries a serious, sometimes fatal health risk. According to the CDC, approximately 75 cases of Powassan virus have been reported over the past decade.

"I want to encourage others to do their research so everyone knows what to look for to hopefully prevent a life of tick-related medical complications, Setzer said. "If one person is spared this grueling and nerve wracking experience I will consider my post a success."