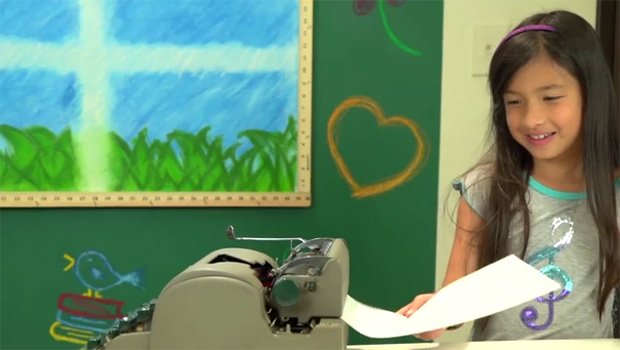 The precursors to computer keyboards we all know and use every day, typewriters were found in practically every school and office for well over 100 years. However, to many kids today, typewriters may as well be as ancient as Gutenberg's printing press.

As seen in the latest "Kids React" video, the comedy duo Benny and Rafi Fine, otherwise known as the Fine Brothers, put one in front of some children and record their hilarious reactions -- a combination of confusion, frustration, shock and awe.

Accustomed to texting, email and instantaneous corrections, the kids attempted to load paper into the typewriter and after a little bit of help from the brothers, they were slowly on their way. When the time came to fix their corrections, Wite-Out certainly came in handy.

Some were baffled about what to do when they heard a 'ding' at the end of a line.

"I think it would just be simpler to write," Dash, age 10, remarked.

Not all the kids were frustrated. In fact, one little girl was eager to trade in her laptop.

"I love this! I'd like to keep this, actually!" Emma R., age 8, said. "It's better because computers use batteries and electricity! Don't waste electricity!"

Past technologies that kids have reacted to in the series include an old Apple II computer, portable cassette players, and Game Boys.