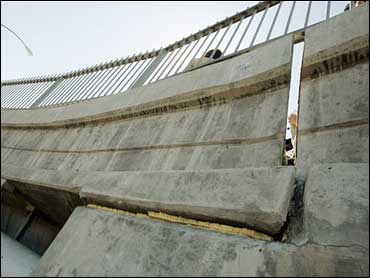 The magnitude 4.6 quake struck just before 1 a.m. about 4 miles northwest of Chatsworth, according to a preliminary report from the U.S. Geological Survey. Three aftershocks were recorded ranging from magnitude 1.6 to magnitude 1.8.

There were no immediate reports of injuries or significant damage, said Los Angeles Fire Department spokesman Brian Humphrey. Hundreds of alarms went off.

The six-lane Whites Canyon Bridge in Santa Clarita was closed after a routine post-quake inspection raised some concerns. Sheriff's deputies found minor cracking and small chunks of fallen concrete on the 300-foot-long, six-lane suspension bridge, officials said. The bridge, which opened about 15 years ago, connects to a busy state route.

Engineers determined the bridge sustained only cosmetic damage. It was reopened later in the day.

"The bridge did what it was designed to do. It expanded at the expansion joints allowing for movement of the structure without causing any issues," city engineer Damon Letz said in a statement.

Scientists have not determined which fault the quake occurred on because it was not strong enough to rip the ground open. But it appeared to have struck in the same region as the devastating 1994 Northridge quake.

Seismologist Kate Hutton of the California Institute of Technology said Thursday's temblor was "pretty much a typical earthquake."

The Chatsworth area is in far northwestern Los Angeles, about 30 miles from downtown. Santa Clarita, a separate city, is about 12 miles to the northeast of there.