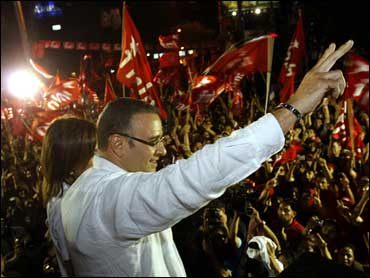 A leftist television journalist has won El Salvador's presidential election, bringing a party of former guerrillas to power for the first time since a bloody civil war and ending two decades of conservative rule.

Mauricio Funes, a moderate plucked from outside the ranks of the rebel-group-turned-political-party Farabundo Marti National Liberation Front, became the latest leftist to rise to power in Latin America at a time of uncertainty over how President Obama will approach the region.

With 90 percent of the vote counted late Sunday, Funes had 51 percent compared to 49 percent for Rodrigo Avila of the ruling conservative Arena party, said Walter Araujo, president of the Supreme Electoral Tribunal.

Funes reported on the 12-year war that ended 17 years ago with 75,000 people dead, and he later hosted a popular interview show. He promised to unite the country after one of the most polarizing campaigns since the conflict.

"This is the happiest night of my life, and I want it to be the night of El Salvador's greatest hope," Funes said. "I want to thank all the people who voted for me and chose that path of hope and change."

Funes, 49, rode a wave of discontent with two decades of Arena party rule that have brought economic growth but done little to redress social inequalities. Fuel and food prices have soared, while powerful gangs extort businesses and fight for drug-dealing turf, resulting in one of Latin America's highest homicides rates.

Funes promised to crack down on big businesses which he says exploit government complacency to evade taxes.

"The time has come for the excluded, the opportunity has arrived for genuine democrats, for men and women who believe in social justice and solidarity," he told a rally of roaring supporters early Monday.

Avila, 44, a former police chief, had warned that an FMLN victory would send El Salvador down a communist path and threaten the country's warm relations with the United States. He vowed Sunday to lead "a vigilant opposition that would ensure that the country does not lose its liberties."

Close U.S. ties saw El Salvador keep troops in Iraq longer than any other Latin American country and become a hub of regional cooperation with Washington against drug trafficking. The country's economy depends on billions of dollars sent home by 2.5 million Salvadorans who live in the U.S.

The Obama government has assured Salvadorans it would work with any leader elected - a marked departure from the Bush administration, which in 2004 suggested that an FMLN victory would hurt ties.

But U.S. relations with some leftist leaders remain tense, including Venezuela's fiery Hugo Chavez and Nicaraguan President Daniel Ortega, who lashed out last week at the United States for holding back aid over an election dispute.

Funes hopes to start off relations fresh with the Obama administration and promises to respect a free trade agreement with the United States and keep the dollar as El Salvador's currency.

"Integration with Central America and strengthening relations with the United States will be the priority of our foreign policy," Funes said.

During the campaign, television broadcasts were flooded with campaign ads warning that a Funes victory would turn El Salvador into a Venezuelan satellite and emphasizing long-standing ties between the FMLN and Chavez. That stoked fears among many Salvadorans with bitter memories of the 1980-1992 leftist insurgency.

"We don't want communists in this country," said Jose Daniel Avila, a 65-year-old retired pilot of no relation to the candidate. "Look what has happened in Nicaragua and Venezuela. Those are not examples to follow."

Chavez said earlier Sunday that his government was not taking sides in the election, adding that Venezuela wants to broaden its relations with whoever won.