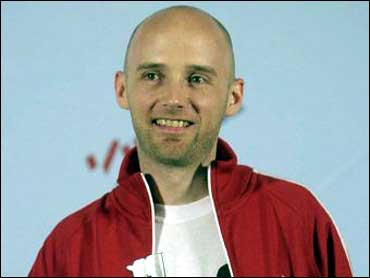 Moby says he has newfound respect for Eminem — who once mocked him in a song — because the rapper criticized President Bush and the war in Iraq on his last album.

"I found myself respecting him for doing that," Moby told reporters during a promotional stop in Hong Kong for his latest album "Hotel."

Moby and Eminem have a long-standing feud. Moby has criticized Eminem's lyrics as misogynistic. Eminem lashed out at Moby and electronic music in "Without Me" and spoofed him in the song's video. He also called Moby a girl at the 2002 MTV Video Music Awards.

"Honestly, if he retired, I think the world of music would be a poorer place. He's a really fascinating public figure," Moby said.

Eminem bashed Bush and Iraq policy in his song "Mosh," which said, "Let the president answer on higher anarchy / Strap him with an AK-47, let him go fight his own war."

Moby said he still has qualms about some of Eminem's lyrics but praised him as talented, saying, "I'd much rather have public figure musicians like Eminem because at least he's exciting."

The 39-year-old electronic musician said he welcomed Eminem's public criticism of him, calling it free publicity.

"To have the most successful musician in the world dress up like you in a video and sing about you in a song — it was honestly some of the best publicity I've ever had."