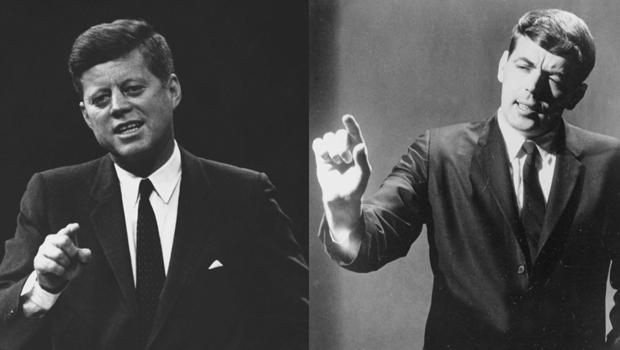 In December 1962 America's #1 album wasn't by Elvis, or Ray Charles, or Peter, Paul & Mary. It wasn't even music. All the excitement was over a comedy album, a parody of then-President John F. Kennedy and his family, fittingly titled "The First Family."

Q: "Sir? When will we send a man to the moon?"
Vaughn Meader as JFK: "Whenever Senator Goldwater wants to go."

Its star was 26-year-old comedian Vaughn Meader, who had the look of a distant Kennedy cousin. But it was his voice that made everyone do a double-take.

Meader as JFK: "He's doing my act. He's doing my gestures and he's using my lines. 'Do not ask what this country can do for you.' That's one of my original lines!'"

Bob Booker wrote and produced "The First Family" album with his partner, Earle Doud. "When [Meader] did Kennedy, it was perfect," Booker said.

They saw an opportunity to capitalize on America's fascination with the Kennedys. The concept was simple: "You've got this giant star, he's a movie star, he's a political star, with this beautiful wife," said Booker. "We said, 'If you take this character and the family, and put them in everyday situations…'"

"The two of 'em at home, Saturday night, because nobody invited them out!"

Meader as JFK: "There must be something to do. I just feel so guilty just sitting here. You want to go bowling or something?"
Naomi Brossart as Jackie: "I can't. I lent Lady Bird my ball."

Soon after the album hit the airwaves, Vaughn Meader became a household name.

"He was really doing something wonderful. It was a worldwide phenomenon," said Sheila Stratton, who was married to Meader. "Rich Little said all of the Kennedy imitators were not imitating Kennedy, they were imitating Vaughn Meader doing Kennedy."

According to Anthony Atamanuik, a comic who is best known for his impersonation of President Donald Trump, a good impression doesn't require any makeup. Of Meader's Kennedy, he said, "Idea should be that the presence of the person is what you feel, like there's a will that presents Kennedy in that moment."

Even the actual President Kennedy seemed amused as he weighed in during one of his press conferences. "Actually I listened to Mr. Meader's record, but I thought it sounded more like Teddy than it did me!" he said.

First Lady Jackie Kennedy was less amused, as she revealed in an interview with Arthur Schlesinger in 1964: "I mean, I thought it was so mean. I didn't care if they make fun of me, but when they make fun of small children…"

Despite any misgivings from the actual First Family, "The First Family" album continued selling like gangbusters, and won the Grammy for Album of the Year.

The country would never be the same.  But no one's life changed quite the way Vaughn Meader's did.

To learn more of his strange and fascinating story – and to hear from a much older Meader – listen to the premiere episode of Mo Rocca's podcast "Mobituaries."