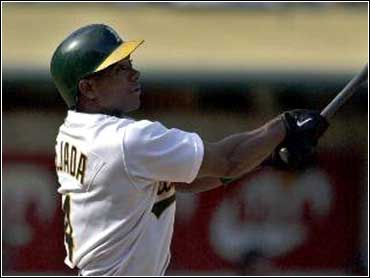 All-Star shortstop Miguel Tejada has been charged with lying to Congress about steroids. Tejada is scheduled to appear in court Wednesday where he is expected to plead guilty.

The charges against Tejada, who currently plays for the Houston Astros, were outlined in documents filed in Washington federal court on Tuesday.

The documents indicate that a plea agreement has been reached with Tejada.

Messages left for his attorney, Mark Tuohey, were not immediately returned.

The documents were filed a day after superstar Alex Rodriguez admitted to past use of performance-enhancing drugs. Following a weekend Baseball's highest-paid player told ESPN on Monday he used banned substances while playing with the Texas Rangers from 2001-03 to justify his 10-year, $252 million contract.

In the documents filed Tuesday, Tejada is charged with lying to investigators for the House Committee on Oversight and Government Reform in 2005 when he denied knowledge of an ex-teammate's use of performance-enhancing drugs.

The teammate is not identified in court documents, but is referred to as having played with Tejada on the Oakland Athletics.

Tejada "unlawfully withheld pertinent information from the committee because defendant Tejada, before and during his interview with the committee staff, then and there well knew that player 1, one of his teammates on the Oakland Athletics, had used steroids and HGH," the papers state.

In fact, prosecutors charge, during spring training in 2003, Tejada had purchased a substance believed to be HGH from the player.

The charges are contained in a six-page criminal information, a legal document used often when a defendant has struck a plea deal with prosecutors.

The criminal information charges Tejada with making misrepresentations to Congress.

"If you're a fan of major league baseball, I think it tarnishes an entire era, to some degree," President Barack Obama said of the Rodriguez news during his first presidential news conference Monday night.