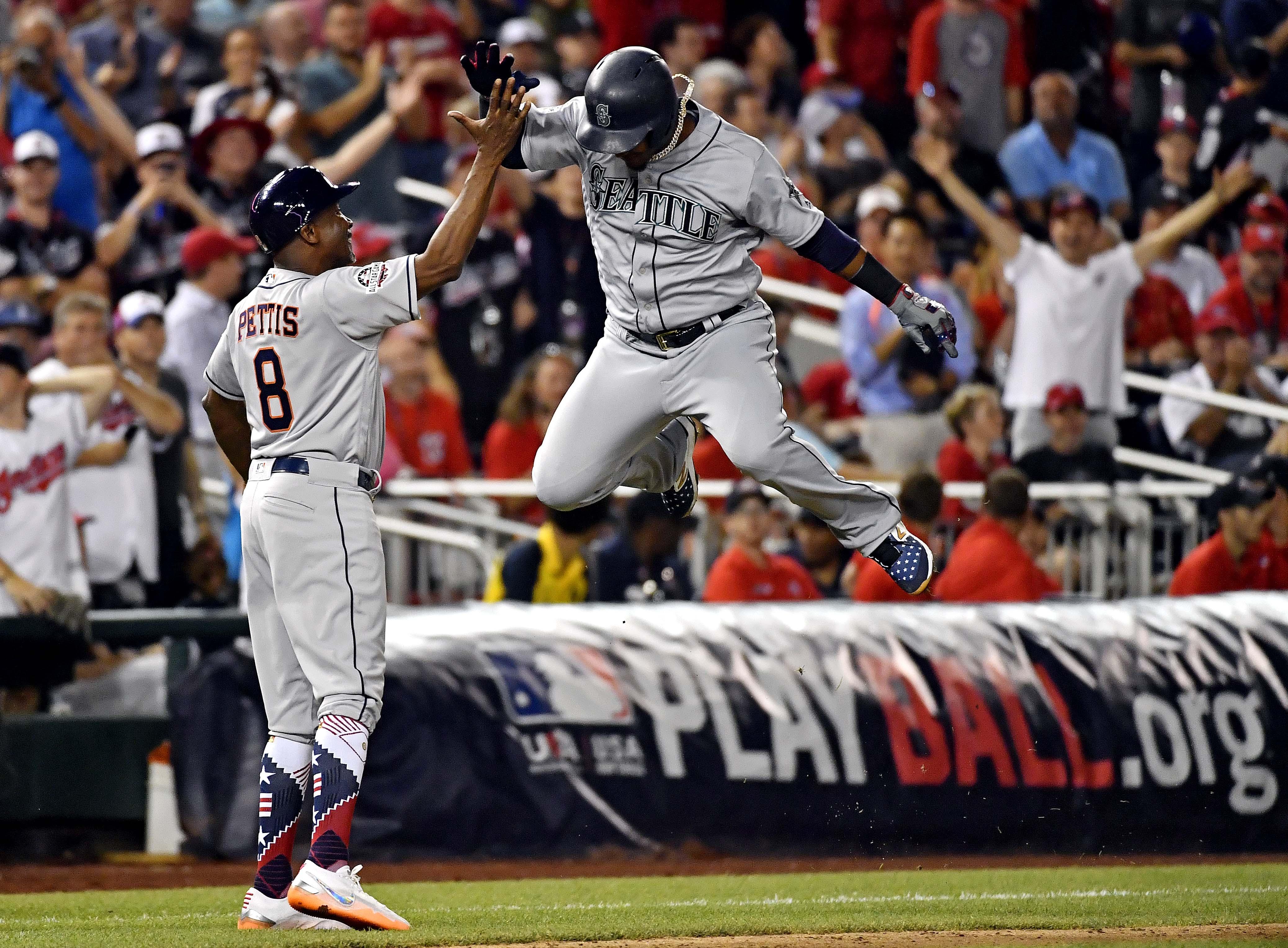 WASHINGTON -- A record 10 home runs. An onslaught of strikeouts. The all-or-nothing All-Star Game mirrored what baseball has become.

"There's a great love affair with both results. I mean, to kind of empty your tank and hit homers tonight at this event is probably the best thing imaginable," he said. "Just to have that kind of emotion that comes with the home run, especially when the big boys hit it and especially when the Astros hit it."

Mike Trout, Aaron Judge and Jean Segura also connected for the AL in a game where every run except one scored on a homer.

There had never been more than six homers in an All-Star Game since Babe Ruth hit the very first one in 1933.

Not that everything went the sluggers' way. Starters Max Scherzer and Chris Sale and the relievers combined to fan 15 in the first 4 1/2 innings, and there were 25 strikeouts overall.

Fitting, because this season is on pace to become the first with more strikeouts than hits, a year after a record number of home runs.

"You're facing power pitchers right now, so that's kind of what you expect: hit-or-miss with these guys," Boston's J.D. Martinez said.

Martinez, who leads the majors in homers and RBIs, singled and struck out in his two at-bats.

Orioles shortstop Manny Machado had fun, pulling out a camera to snap a selfie at second base after Matt Kemp doubled. By Wednesday, they could be teammates - Baltimore seems ready to trade Machado, with the Dodgers and Phillies in the mix.

CBS Sports HQ baseball insider Jim Bowden reported that Machado isn't expected to be a member of the O's once their season resumes after the All-Star break and that he'll be dealt to a National League team.

"I'm just trying to enjoy this moment with the American League guys," Machado told FOX in the dugout. "If this is the last time (in a Baltimore uniform), hopefully I treated them well and did everything I can for the organization."

Major League Baseball, meanwhile, seemed to take a selfie of itself at this game, with all the homers and strikeouts. This was MLB 2.018, an update that's not appealing to everyone.

Declining attendance is a concern, and the sport's owners worry that slower games with less action on the bases are taking a toll.

A day after hometown star Bryce Harper electrified the crowd by winning the Home Run Derby, it was eerily quiet for most of the evening at Nationals Park. Harper didn't excite the fans, either, fanning in his two at-bats.

The popular Presidents Race at the park drew the biggest cheer in the middle innings, with the big-headed George Washington character prevailing.

The only thing missing was a bevy of defensive shifts. Overloaded infields are the norm now, but Hinch and NL manager Dave Roberts of the Dodgers pretty much played things straight up.

Bregman and Springer homered off losing pitcher Ross Stripling of the Dodgers - that's kind of how last year ended, too, with Houston battering Los Angeles pitchers in the World Series.

Bregman smiled all around the bases and earned MVP honors. He's familiar with this city, his grandfather having been the general counsel for the old Washington Senators.

"My dad grew up on Ted Williams' lap. So to see Ted Williams Most Valuable Player on this trophy is pretty special," Bregman said.

Segura's three-run homer in the eighth landed in the bullpen and broke a 2-all tie. The Seattle infielder popped up the previous pitch, but Votto, Cincinnati's reliable first baseman, dropped it for an error as he approached the dugout railing.

Segura then connected off Milwaukee's Josh Hader, one of baseball's most dominant relievers. Meanwhile, Hader was becoming the center of a firestorm over some racist and homophobic tweets that surfaced during the game, and apologized afterwards.

Judge homered in the second off Scherzer, the Nationals ace who became the first reigning Cy Young Award winner to start an All-Star Game in his home park. There was another judge at the park besides the Yankees slugger - Brett Kavanaugh, President Trump's Supreme Court nominee.

"It's tough to barrel up some balls (hit them solidly) when you've got some of the best pitchers in the game throwing against you and you don't really have a scouting report. You're just going up there swinging," Judge said.

Trout kept up his All-Star excellence, tagging Mets righty Jacob deGrom. A two-time MVP in his event, Trout is 7 for 15 with five extra-base hits and three walks in these games.

Diaz wound up with the win and Toronto's J.A. Happ got his first pro save after giving up Votto's homer.