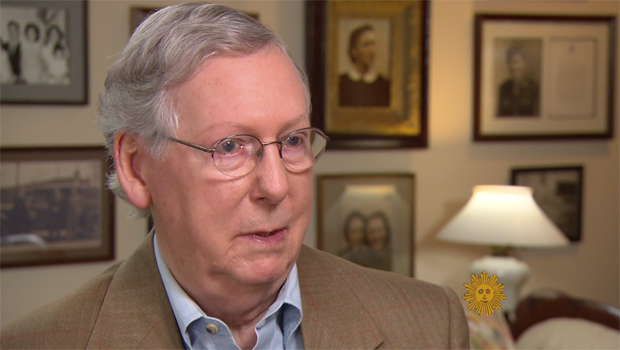 Senate Republican leader Mitch McConnell has his critics on BOTH sides of the aisle. With Jan Crawford this morning he'll try to make himself heard over the partisan din:

To many, Kentucky Senator Mitch McConnell is the face of obstruction.

"Common Cause used to call me Darth Vader," he told Crawford.

Does that ever bother him? "No, it doesn't. I think you have to accept the fact that you can't make everybody happy."

Liberals think he made clear his intention to block the president's agenda in 2010, when he told a reporter: "The single most important thing we want to achieve is for President Obama to be a one-term president."

But there was a second part after that sentence, McConnell said, which was that "in the meantime we needed to see what we could do together and make some progress for the country, which was neatly snipped off by my political opponents, which is understandable.

"The people who would call me an obstructionist overlook some inconvenient facts."

Just ask his conservative Tea Party opponents. "They think I am an Obama enabler or something!" he laughed.

The Senate Majority Leader responds to his critics in his first book, "The Long Game" (Sentinel).

Crawford asked, "How'd you come up with the title?"

"Well, first of all I've been around a while," he laughed. "And second, it took me a long time to get to where I had hoped to get. For most of us, success is the long road."

That road has taken McConnell a long way from rural Alabama, where he was born and (at age two) stricken with polio. While his father was serving in World War II, McConnell's mother drove him to Warm Springs, Georgia, the polio treatment facility established by President Franklin Roosevelt.

After two years, the nurses told McConnell's mother her son would walk without brace; he would have a normal life.

Then, at 13 McConnell moved to Louisville, which, he says, he found "very intimidating."

Three years later he was an underdog for student council president, trying to outmaneuver his opponents. He woudl slip pamphlets into lockers ("Join us and vote for Mitch McConnell for president") listing football players, basketball players, cheerleaders and the homecoming queens who'd lined up to endorse him.

"How did you get the most popular, prominent kids in the school to endorse you?" Crawford asked.

He won, and McConnell, a pack rat, saved his mementos from that race -- and every other throughout his nearly 40 years in elected office. Much of it is on display at his alma mater, the University of Louisville, which houses his papers and those of his wife, Elaine Chao, Labor Secretary under George W. Bush.

The longtime Washington power couple now spends most weekends in Kentucky ... a far cry from their first date suggested by a mutual friend.

"I just got this call, I think, out of the blue from Mitch's assistant," Chao recalled. "I think my assistant answered back to his assistant. And that's how the first date was set up."

"It literally was a blind date, 'cause I had never seen her before," McConnell said.

A divorced father of three, McConnell married Chao in 1993 -- on Ronald Reagan's birthday.

Chao says before he was Majority Leader McConnell "actually cooked" -- "a low-maintenance husband!"

On the campaign trail, her warmth contrasts with McConnell's wonkier side. An immigrant from China, Chao came to the United States when she was eight years old. She spoke about her immigrant experience at the 2000 Republican Convention, but when asked about this year's presumptive Republican nominee, she firmly avoids the question.

And when you sit down with McConnell, he's hardly more forthcoming on the subject of Donald Trump.

Crawford asked, "Do you think Donald Trump can win?"

"Are you gonna support him?"

"Does it cause you pause when you think about how divided this country is, and how he is causing such division? I mean, Republicans, in your party, are burning their voter registration cards. They're saying, 'Never Trump.'"

"Well, one thing I'm pretty calm about is that this is nowhere near the most divisive period in American history," McConnell said. "But what protects us in this country against big mistakes being made is the structure, the Constitution, the institutions.

"No matter how unusual a personality may be who gets elected to office, there are constraints in this country. You don't get to do anything you want to. So I'm very optimistic about America. I'm not depressed about the nature of the debate."

Since becoming Majority Leader in 2015, McConnell struck deals with the administration on major transportation, education and cybersecurity bills.

He has warm words for Joe Biden, but says the president can be a challenge.

"I admire his intellect," McConnell said, adding, "It is a little bit grating to kind of, you know, be lectured to. And I've heard this complaint from Democrats as well. This is not a partisan observation! I pretty much know what he thinks and he ought to know what I think. I'm pretty much interested in how we figure the way forward rather than listening to a rather extensive discussion of his views."

One area on which McConnell will not budge: Merrick Garland's nomination to replace Supreme Court Justice Antonin Scalia.

"No wavering on that?" Crawford asked.

"Merrick Garland will be on the Supreme Court if Hillary Clinton wins and she re-nominates him?"

"Well, if he's on the Supreme Court he'll be nominated by the next president."

Regardless of what happens in the November election, the 74-year-old McConnell has made clear he's playing the long game.

"America's a land of second opportunities," he said. "Everybody has barriers to overcome, some more than others. I don't want to act like I'm all that unique. America's full of stories like mine. This is a special country with enormous opportunity for those who don't quit."