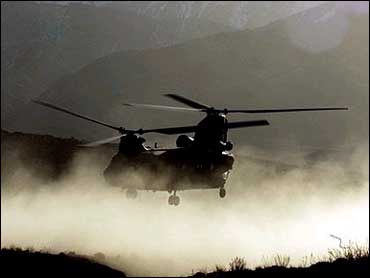 One member of an elite military team missing in the Afghan mountains since last week has been rescued, a U.S. Defense Department official said Sunday.

The soldier, who had been among a six-member team that disappeared, was rescued by U.S. forces. He was in good shape, but was being rushed to Landstuhl Regional Medical Center in Germany. His family had been notified, the official said.

The search continues in eastern Afghanistan for the three remaining missing U.S. troops. It's hoped that the rescued soldier will help the military zero-in on their location.

"The fact that we got one of our people back is extremely important," CBS News Military Consultant Mitch Mitchell said. "He'll provide us with great intelligence about what the others are doing what kind of equipment they had and what their situation is."

The soldiers were last heard from Tuesday, when they radioed for help in battling al Qaeda fighters.

In responding to that call, a Chinook helicopter carrying eight Navy SEALs and eight members of the Army's 160th Special Operations Aviation Regiment - known as the Night Stalkers - was shot down. All 16 troops were killed.

Since then, rescue teams braving bad weather and enemy fire have pressed the search for the missing commandos. Conditions in the 10,000-foot mountains are described as "incredibly difficult."

The official who confirmed the rescue said the soldier survived by "evading the enemy," CBS News Correspondent Bob Orr reports.

While special operations soldiers are trained in stealth and survival skills, time is an enemy for the troops still missing.

"The biggest problem that our people out there right now are facing is the lack of water," Mitchell said. "If they don't have it, they dehydrate and they become unable to do what they have to do to survive."

The five were killed in mountains east of Kandahar, the main city in southern Afghanistan, on Saturday, local police chief Gulam Rassol said. Ten suspected rebels were also captured. U.S.-led coalition troops and Afghan police had raided a rebel camp in the area and were still searching Sunday for more insurgents, he said.

The cleric, Mohammed Nabi Misbah, a senior member of Afghanistan's Islamic clergy, the Ulema Council, was shot Sunday as he drove from his office to his home in Kandahar, city police chief Gen. Ayub Salangi said.

He was taken to a nearby U.S. military base for treatment, but died, Salangi said.

It was the second attack on a prominent pro-government cleric in the city in just over a month. In late May, cleric Abdul Fayaz, also a supporter of President Hamid Karzai, was shot dead. At his funeral, a suicide bomber killed 20 people.

Taliban-led rebels have targeted hundreds of people linked to Karzai's U.S.-backed government in an unprecedented spree of violence since March that has left nearly 700 people dead and threatened three years of progress toward peace.