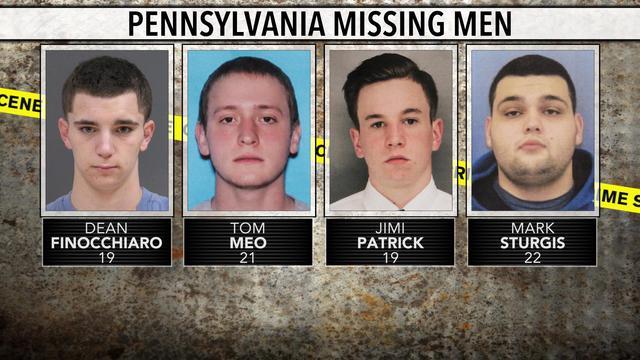 Investigators looking into the disappearances of four young Pennsylvania men were initially led to a family farm in suburban Philadelphia by the signal from one of their cellphones, CBS News senior investigative producer Pat Milton reports.

On Thursday, a member of the family who owns the farm, Cosmo DiNardo, 20, confessed to the commission of or participation in four murders and agreed to plead guilty to four murder counts, attorney Paul Lang said outside court, where DiNardo had met with investigators. DiNardo also told investigators where the bodies are.

DiNardo, 20, was charged Friday with the killings and 20 other counts, including abuse of corpse, conspiracy and robbery, according to court documents. A second suspect, Sean Kratz, 20, was also arrested and faces 20 counts, including three of criminal homicide.

A person familiar with the matter told Milton that investigators are in the process of trying to check out various claims allegedly made by DiNardo.

A person with firsthand knowledge of DiNardo's confession told The Associated Press on the condition of anonymity on Thursday that he was a drug dealer who felt cheated or threatened during three drug transactions and then burned their bodies.

"Every death was related to a purported drug transaction, and at the end of each one there's a killing," the person said.

DiNardo, 20, then burned the bodies -- three of them inside a drum -- at his family's farm in Solebury Township, about 30 miles north of Philadelphia, the person said, adding that a co-conspirator was involved in the deaths of three of the men.

Text messages obtained by "CBS This Morning" show DiNardo had been part of a group chat set up by friends of the missing men, CBS News correspondent DeMarco Morgan reports.

When asked if he was worried about his "buddy" Dean Finocchiaro, 19, DiNardo called him a "pill-popping junky" who probably "just jumped parole."

Those messages, as well as Snapchat photos of DiNardo posing with a revolver, were first reported by philly.com.

Searchers recovered Finocchiaro's body Wednesday from a common grave. Cadaver dogs led investigators this week to the spot on the family farm where they discovered human remains inside the 12 1/2-foot-deep grave.

The remains of Tom Meo, 21, Jimi Taro Patrick, 19, and Mark Sturgis, 22, have also been identified, District Attorney Matthew Weintraub said Friday. Patrick, who was a year behind DiNardo at a Catholic high school for boys, was last seen on July 5, while the other three vanished two days later. Patrick's remains were found at a different site than the others'.

As a law enforcement official escorted a shackled DiNardo from the courthouse on Thursday, he said "I'm sorry."

The person with knowledge of the confession said one of the men was killed July 5 and the other three were killed July 7.

In exchange for DiNardo's cooperation, Lang said, prosecutors would not seek the death penalty. The Bucks County District Attorney's Office had no response to the lawyer's comments on Thursday night. Authorities are expected to release additional information on the case Friday morning.

Authorities had charged DiNardo earlier this year with having a gun despite an involuntary mental health commitment. In seeking $5 million bail on a stolen car charge this week, prosecutors said he had been diagnosed with schizophrenia. He also suffered a head injury in an ATV accident a year ago.

DiNardo's parents declined to comment after leaving a government building where he spent several hours with the district attorney and other investigators.