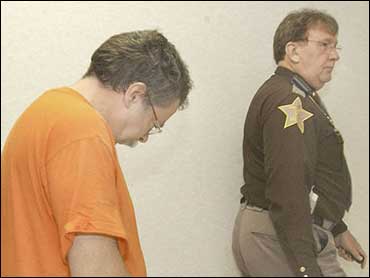 A convicted child murderer who was paroled in March faces murder charges in the death of a 16-year-old girl, whose body was found the day after the two left a restaurant where they worked, a prosecutor said Thursday.

Investigators found the body of Stephanie Wagner in a northwestern Indiana field Wednesday night. The suspect, Danny R. Rouse, 51, a dishwasher at the restaurant where Wagner was a waitress, told them where to look and confessed to killing her, police said.

Rouse was arrested and held without bond. Sheriff's Detective Tom Wallace testified at a probable cause hearing Thursday that Rouse admitted strangling Wagner and then stabbing her.

Prosecutor Kevin Enyeart said he expected to charge Rouse with murder later Thursday. The court hearing was to continue Friday.

Rouse and Wagner left the Indian Head Restaurant, where they both worked, at about 9:30 p.m. Tuesday, police said. Her mother reported her missing about six hours later.

Her body was found Wednesday night about a mile from where police discovered her abandoned car in her hometown of Royal Center, about 50 miles southwest of South Bend.

Police took Rouse in for questioning when he showed up for work Wednesday. He told deputies he was driving along a highway when his vehicle began making funny sounds. He pulled over and Wagner stopped to see if she could help, Wallace said. That is when "a feeling came over him," he told police.

Rouse had been working at the Indian Head Restaurant for about two weeks, co-owner Heidi Fitousis said. She said she had no idea of Rouse's criminal past when he was hired.

"(We) don't normally do a background check, not for a dishwasher," she said Thursday.

Rouse was released from prison in March after serving more than 26 years for murdering a 5-year-old Kansas boy in 1979. He was convicted of first-degree murder in the slaying of Jason Learst at a Wichita, Kan., apartment, The Wichita Eagle reported Thursday. Rouse also was convicted of stabbing the boy's mother.

Fitousis described Wagner, who had worked at the restaurant for about a month, as shy and quiet.

Wagner withdrew from high school last year and was being home-schooled, her friend Megan Mannies said Wednesday. Wagner had been pursuing a high school diploma and enjoyed her job at the restaurant, Mannies said.

"She is funny," Mannies said. "She's hilarious. She's my best friend in the whole world."