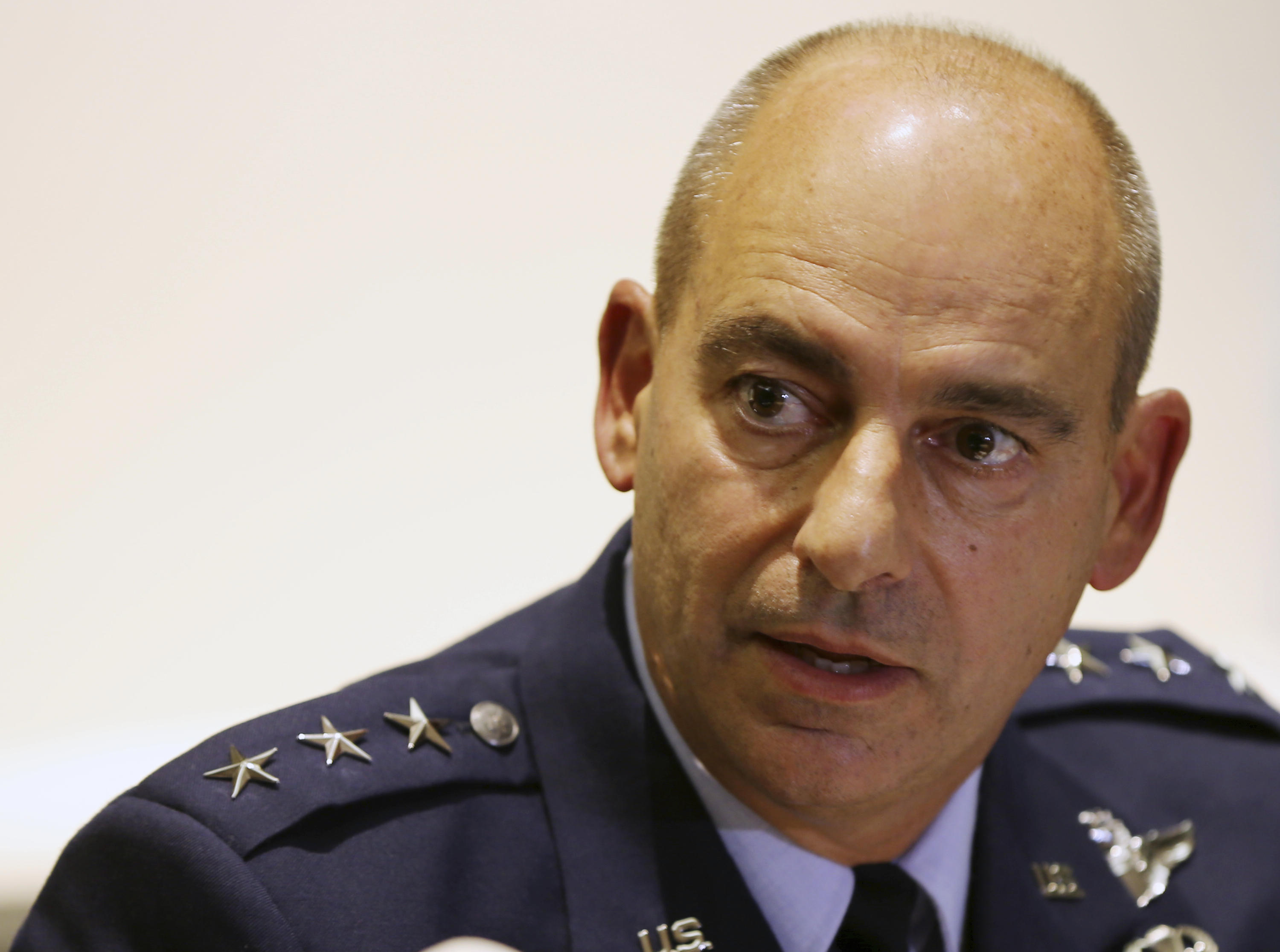 Saudi Arabia long has accused Iran of giving weapons to the Shiite rebels known as Houthis and their allies, though Tehran has just as long denied supplying them.

"There have been Iranian markings on those missiles," Harrigian told journalists at a news conference in Dubai ahead of the Dubai Air Show. "To me, that connects the dots to Iran."

There was no immediate reaction from Tehran.

Saudi Arabia says it shot down the missile Nov. 4 near Riyadh's international airport, the deepest yet to reach into the kingdom. Saudi Arabia's Foreign Ministry later said investigators examining the remains of the rocket found evidence proving "the role of Iranian regime in manufacturing them." It did not elaborate, though it also mentioned it found similar evidence after a July 22 missile launch. French President Emmanuel Macron similarly this week described the missile as "obviously" Iranian.

Nikki Haley, the U.S. ambassador to the United Nations, said in a statement Tuesday that the July launch involved an Iranian Qiam-1, a liquid-fueled, short-range Scud missile variant. Iran used a Qiam-1 in combat for the first time in June when it targeted Islamic State of Iraq and Syria (ISIS) militants in Syria over twin militant attacks in Tehran.

Harrigian declined to offer any specifics on what type of missile U.S. officials believed it was, nor did he show any images of the debris. He also didn't explain how Iran evaded the blockade by the Saudi-led coalition, which intensified after the missile targeting Riyadh.

"How they got it there is probably something that will continue to be investigated over time," the lieutenant general said. "What has been demonstrated and shown based on the findings of that missile is that it had Iranian markings on it. That in itself provides evidence of where it came from."

The Houthis have described using Burkan-2 or "Volcano" Scud variants in their recent attacks, including the one on Nov. 4. Those finless missiles are reminiscent of the Qiam, wrote Jeremy Binnie of Jane's Defense Weekly in a February analysis.

"The Burkan-2 is likely to heighten suspicions that Iran is helping Yemen's rebel forces to develop their ballistic missile capabilities," Binnie wrote.

Adding to that suspicion is the fact that Yemen's missile forces previously never had experience in disassembling and rebuilding the weapons, said Michael Knights, a fellow at The Washington Institute For Near East Policy who previously worked in Yemen.

It is "not a stretch to believe that Tehran is supporting the Houthi missile program with technical advice and specialized components," Knights wrote in an analysis Thursday. "After all, the Houthis have rapidly fielded three major new missile systems in less than two years while under wartime conditions and international blockade."

The U.S. already is involved in the war in Yemen and has launched drone strikes targeting the local branch of al-Qaida, though it stopped offering targeting information under the Obama administration over concerns about civilian casualties. That prohibition continues today, though the Air Force continues to refuel warplanes in the Yemen theater and offers support in managing airspace over the country, Harrigian said. The Saudi-led coalition also uses American-made bombs and ordinance in its attacks.

Yemen long has had ballistic missiles, dating back to the 1970s when Yemen was split between the socialist South Yemen and North Yemen. After unification in 1990 and a later civil war, Yemen largely moved its ballistic missile stockpile to a mountain base in Sanaa, the capital. It also purchased more from North Korea.

When the Houthis seized Sanaa in September 2014, their allied fighters also held control of the ballistic missiles. The Yemeni military was widely believed to possess around 300 Scud missiles at the time, though exact figures remain unknown.

The Saudi-led coalition entered the war in March 2015 on the side of Yemen's internationally recognized government. It then attacked the ballistic missile base in April 2015, touching off massive explosions that killed several dozen people. Saudi Arabia implied at the time that the Scud arsenal in Yemen had been seriously degraded, if not entirely destroyed, as a result of the airstrikes.

It soon would become clear that wasn't the case. In June 2015, the rebels fired their first ballistic missile into Saudi Arabia near the southwestern city of Khamis Mushait. In the time since, Yemen's rebels have fired over 70 ballistic missiles into Saudi Arabia, according to the Washington-based Center for Strategic and International Studies' missile defense project.

For its part, Iran long has denied offering any arms to Yemen, though it has backed the Houthis and highlighted the high civilian casualties from the Saudi-led coalition's campaign of airstrikes.

But others in Iran have been coy about the ballistic missiles in Yemen. Mehdi Taeb, an influential hard-line cleric who is a brother to the intelligence chief of the hard-line Revolutionary Guard, said in April that Iran tried three times to send missiles to Yemen. The Guard, answerable only to Supreme Leader Ayatollah Ali Khamenei, oversees Iran's missile program.

The cleric said ultimately the administration of Iranian President Hassan Rouhani ordered the transfers stopped over negotiations on the nuclear deal with world powers, without offering a specific time for the attempted shipments.

"They said come back because the Americans said, 'If you send missiles to Yemen, we will end the negotiations,'" Taeb said.