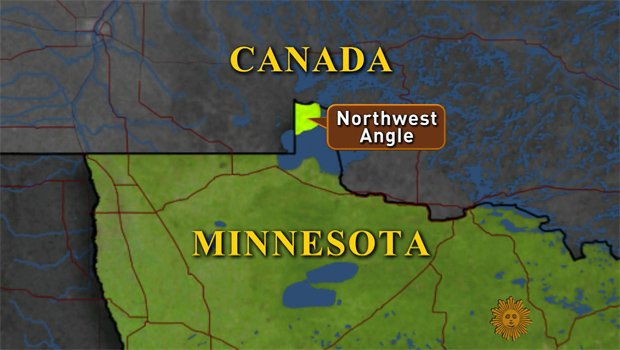 When does a borderline confuse things rather than clearly define them? When it's the border our Lee Cowan has been inspecting:

The sound of distant deer hunters is about all you'll hear along one remote tree-lined corridor -- a stretch of the longest land border between two countries.

But this lonely spot is also the gateway to an American geographic oddity: Minnesota's Northwest Angle, where one resident said, "Most people up here are adventurous, or crazy, or both!"

On a map it looks as if someone put a substantial part of Minnesota in Canada by mistake.

In fact it WAS a mistake, made in 1783 during the Treaty of Paris. The border being drawn between the U.S. and then Britain was supposed to cut through Lake of the Woods at a northwest angle -- hence the name.

Problem was, the map the Founding Fathers used of Lake of the Woods was completely wrong. They were way off, but that weird boundary bump stuck.

And ever since, "The Angle" (as locals like to call it) has remained an outlier. The only overland route to this part of Minnesota is actually through Canada on a gravel road.

There's no fence, no guard, no official-looking anything, really, until you come upon a shed called Jim's Corner.

It houses a video phone so that arriving travelers can check in with U.S. Immigration before driving on.

There's no grocery store, no hospital, no theater, no fast food restaurant -- not even a single traffic light.

But what it DOES have is fish. The sprawling, chilly waters of Lake of the Woods offer some of the best Walleye fishing in all of North America.

Most come here to put a hook in the water and then go home. But there are about 60 or so hearty Minnesotans who LIVE in the Angle year-round, many of whom run fishing lodges, like Jason and Lisa Goulet.

"It takes a unique blend of personality traits to really make a go of this," said Lisa.

Making "a go of it" here usually means leaving here. Even the most mundane tasks involve a certain amount of shuttle diplomacy. "Grocery shopping is once a week, and that's an hour and fifteen minutes, one way," Lisa said.

First, residents have to notify Canadian authorities that they're about to cross the border. Then, it's a 60-mile or so trek through Canada back to the U.S. boundary line to cross back into Minnesota and the nearest town.

"It pretty much takes up your day," Jason Goulet said. "I realize it's only 150-mile round trip or whatever, but with all your stops, I mean, it's 5-6 hours every time."

The Goulets at least have help managing this lifestyle. They have eight kids. The girls -- all seven of them -- help out their mom making custom quilts, while Jack, their only boy, helps his dad with the ice-fishing shacks.

The Goulets' brood make up a third of the student body at the Angle's tiny one-room schoolhouse -- Minnesota's last.

"To have a slumber party, my girls were just so disappointed because their friends had to have a passport if they wanted to come up for a slumber party," Lamie said. "So it is different, but we've just gotten used to it, and it just seems normal."

There isn't room to house high school students here, though. For that, the older kids have to border hop.

For some it starts long before dawn. They arrive by boat from some of the Angle's islands -- also part of the U.S. -- to catch a school bus. A few stops later the driver finds himself at that roadside video phone, reporting the names of every student on the bus heading to their Minnesota high school by way of Canada, in the dark.

By sun-up, we got to wondering if maybe life would be easier if the Angle were just part of Canada. Turns out they tried that back in the '90s. The Angle made big news when it threatened to secede from the U.S. over a fish dispute. Turns out that walleye caught on the Canadian side of the lake couldn't be brought back to the U.S. side, and that made fisherman and Northwest Angle resident Gary Deiztler pretty mad.

Cowan asked, "Did you ever imagine that it would become this big trade dispute?"

"No! We were just trying to get a couple fish, keep the resort going!" said Deiztler.

It was partly his idea to join Canada, mainly as a stunt to get publicity for the fisherman's cause - -- and it worked.

The Great Walleye War, as it came to be known, ended amicably. The Northwest Angle remained part of the U.S. -- and the Walleyes' nationality seemed to matter no more.

Since then things have remained as they usually are here -- quiet, serene and remote.

The Northwest Angle may be an orphan of the atlas, but that's just the way folks at the "Top of the Nation" like it.