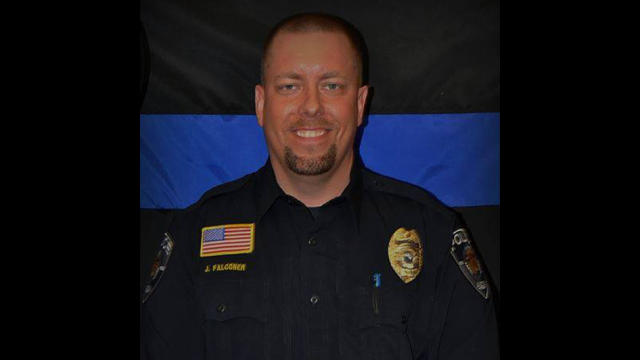 Five minutes after authorities received the first 911 call, Jason Falconer, a part-time officer in the city of Avon, began shooting the attacker as he was lunging at him with the knife, and continued to engage him as the attacker got up three times, according to police.

Avon Police Chief Corey Nellis said at a press conference Monday that he is “very proud of Officer Falconer’s heroic actions in confronting the perpetrator of the stabbing assaults of the Crossroads Mall Saturday.”

Nellis said more victims could have been hurt or killed if Falconer hadn’t shot the suspect.

“Officer Falconer put himself in harm’s way to protect the public from a man who had already stabbed nine victims,” Nellis said, adding that Falconer was the “right person, at the right place, at the right time.”

Falconer hasn’t spoken publicly about the incident, and Nellis asked that he be given time to cope.

“He too is a victim in this situation,” Nellis said.

The father of suspect Dahir A. Adan says his son was as a 22-year-old college student.

Ahmed Adan told the Star Tribune of Minneapolis that police told him Saturday night that his son died at Crossroads Center mall in St. Cloud.

He says police didn’t mention the attack on the mall, but they seized photos and other materials from the family’s apartment.

The family of Adan issued a statement Monday evening expressing condolences to the people injured and anyone else who was affected.

Ahmed Adan, who is Somali, says his son came to the U.S. 15 years ago and was was a student at St. Cloud Technical and Community College. He told the Star Tribune he had “no suspicion” that his son might have been involved in terrorist activity.

A federal law enforcement source told CBS News that the deceased suspect asked people if they were Muslim and stabbed those who said they were not.

All nine victims -- seven men, a woman and a 15-year-old girl -- were treated at hospitals for wounds that weren’t life-threatening, St. Cloud police Chief Blair Anderson said at a news conference Sunday. Three remained hospitalized. The others were released.