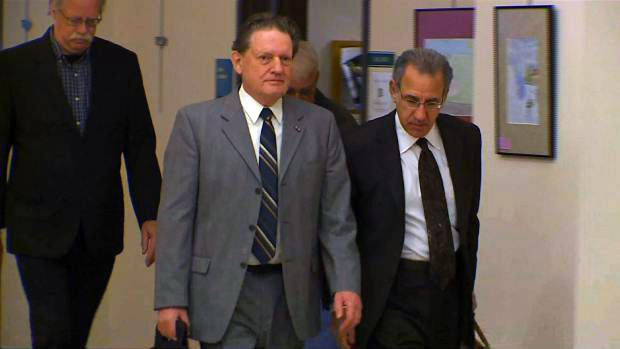 Byron Smith, the Minnesota man who fatally shot two teens after they broke into his home, was found guilty on all four counts of murder Tuesday afternoon, CBS Minnesota reports.

Smith claimed he shot in self-defense and was in fear for his life after several break-ins at his Little Falls home, but during closing statements Tuesday, a prosecutor said Smith intended to kill. A medical examiner found the two teens were shot a total of nine times after they broke into Smith's home on Thanksgiving Day in 2012.

Prosecutors argued that Smith waited in his basement and intended to kill the teens, with a setup so elaborate that lead prosecutor Pete Orput compared it to a deer stand - with the teens as the deer.

The killings stirred debate in Little Falls - a town of 8,000 about 100 miles northwest of Minneapolis - and around the state over how far a homeowner may go in using deadly force. Minnesota law allows lethal force to prevent a felony from taking place in one's home or dwelling, but authorities have said Smith crossed a line when he continued to shoot the teens after they were no longer a threat.

Smith's attorney argued the teens would be alive if they hadn't chosen to commit a burglary, reports the station.

An audio recording of the shooting emerged as a key piece of evidence at trial. In the recording, Smith can reportedly be heard firing multiple shots at Brady and telling him, "you're dead."

The mothers of the teens cried as the verdicts from the six-man, six-woman jury were read. Smith showed no emotion. He was immediately sentenced to life without parole. Defense attorney Steve Meshbesher said he would appeal.

Brady's grandmother, Bonnie Schaeffel, was among family members who addressed the court after the verdicts were given.

"He seems a sour, angry old recluse who felt he was above the law," Schaeffel said. "He chose to be cop, judge, jury and executioner."

Kifer's aunt, Laurie Skipper, read a statement from her niece's parents: "Byron Smith made a conscious choice to shoot and kill our beautiful daughter Haile. ... The feelings of helplessness are overwhelming."

Prosecutors said Smith's plan was set in motion on the morning of the killings, after Smith saw a neighbor whom he believed responsible for prior burglaries drive by. Prosecutors say Smith moved his truck to make it look like no one was home, and then settled into a chair in his basement with a book, energy bars, a bottle of water and two guns.

Smith also set up a hand-held recorder on a bookshelf, which captured audio of the shootings, and had installed a surveillance system that recorded images of Brady trying to enter the house.

The audio, which was played several times in court, captured the sound of glass shattering, Brady descending the basement stairs and Smith shooting Brady three times. Smith can be heard saying, "You're dead." Prosecutors said Smith put Brady's body on a tarp and dragged him into another room, then sat down, reloaded his weapon and waited.

About 10 minutes later, Kifer came downstairs. More shots are heard on the recording, then Kifer's screams, with Smith saying, "You're dying." It's followed soon after by another gunshot, which investigators said Smith described as "a good, clean finishing shot."

The teens were unarmed, but Smith's attorneys had said he feared they had a weapon.

The tape continued to run, and Smith was heard referring to the teens as "vermin." Smith waited a full day before asking a neighbor to call police.