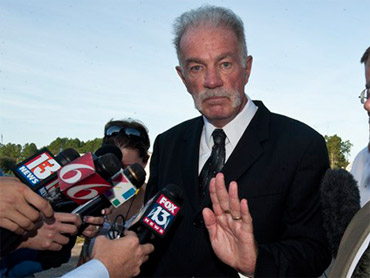 The minister who once planned to burn copies of the Quran to mark the 9/11 anniversary headed to New York aboard a Friday night flight.

The Rev. Terry Jones has said he wants to meet with the imam behind a proposed mosque and Islamic center to be built near ground zero.

Surrounded by a throng of police, Jones declined to comment to reporters who waited for him at LaGuardia Airport and followed him to a waiting cab.

K.A. Paul, a Christian evangelist who runs a ministry in Houston, said he bought the ticket for Jones to fly out of Orlando. Paul, an acquaintance of Jones, provided The Associated Press with a copy of the itinerary and flight confirmation number.

Questions about Rev. Jones Surface in Germany
Jones: Judaism, Other Religions "Of The Devil"
Terry Jones, The Man Behind "Burn A Quran Day"

Paul said Jones was able to sneak out of his Gainesville church without the media noticing.

Earlier Friday, Jones' son, Luke, said that the Quran-burning won't take place Saturday but couldn't say whether there would be a future event.