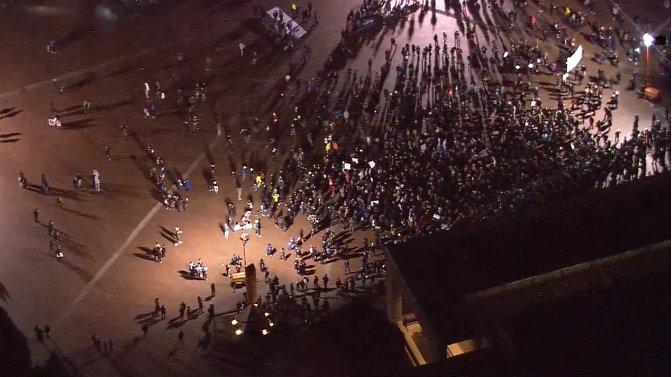 SEATTLE -- A man was shot at a University of Washington protest in the campus’ Red Square outside an event with controversial Brietbart News editor Milo Yiannopoulos, CBS affiliate KIRO reports.

The University of Washington tweeted at 10:40 PT that the suspect was still at large.

Yiannopoulos posted on Facebook after the event “prayers are with the victim, whoever he is.”

The University of Washington College Republicans invited Yiannopoulos to speak on Friday. People had been waiting outside for the event since around 5 p.m.

Protesters showed up on campus around 6 p.m. and began clashing with police.

Protesters threw rocks, fireworks, and other items at officers. They blocked the entrance to Kane Hall, but Yiannopoulos’ speech still started around 8 p.m.

A KIRO chopper caught video of bike officers rushing to a crowd of people at 8:30 p.m. Moments later they started responding to a man on the ground.

UW alert went out to students, telling them to stay out of the area.

People rallied and listened to speeches before resuming a march Friday evening, blocking traffic in some downtown areas.

Police also said officers were investigating reports of people in the crowd with fireworks and rocks.

About 200 protesters gathered on the Capitol steps in Olympia, carrying signs that included “Resist Trump” and “Not My President.”