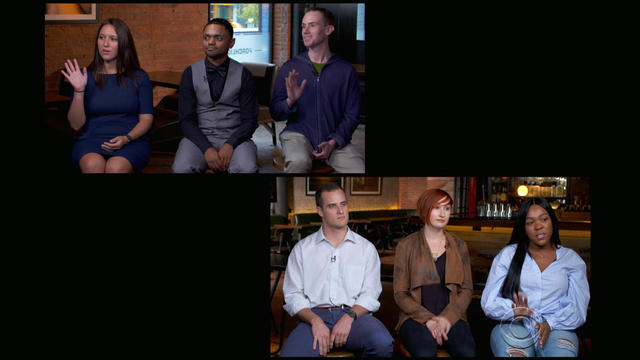 "CBS This Morning" is partnering with digital media company Refinery 29 this morning for a new series about millennials called My Generation.

Millennials are people who were born between the early 1980s and mid-90s. They make up the largest living generation, bigger than Baby Boomers and Generation X. Their money, their attention and their votes are all in big demand.

But identifying millennials is complicated by a divide within the generation. Their formative years were split by the financial crisis, smartphones and social media.

While millennials are arguably more ambitious, educated and informed than generations before them, there is a perception that they are not in a rush to settle professionally. That can lead to the misperception of their being lazy and entitled.

At the New York City bar Porchlight, correspondent Bianna Golodryga met millennials from across the country -- three older (aged 30 to 34), and three younger millennials (aged 23 to 27) -- to get their reactions to stereotypes about them.

Most seemed to agree with the notion that millennials are entitled.

"I agree with that," said Emma Calvillo. "I think we've been conditioned to get used to being comfortable with things coming to us quickly, things being more convenient for us, getting things quicker."

But they all disagreed with the notion that millennials are lazy.

"I disagree with that," said Corvette James. "I work a full-time job, and then I come home and then I run a business."

"That's why I think we're not entitled, is because of that entrepreneurial spirit that millennials have," said Ronald Clark. "I think we're one of the hardest-working generations. Because of the country that was left to us, we have to be."

Dianna Colasurdo added, "Because our generation -- and maybe this is also part of the millennial divide -- the younger millennials came into the workforce with more knowledge and expertise in technology and social media, they're coming in and thinking, like, 'I deserve more. I deserve more faster.'"

Entering the job market before or after the financial crisis exploded also affected their outlook about their finances and careers.

"It has made me extremely driven," said Colasurdo, "because when I first entered the workforce, there were very limited jobs. And so I was competing for jobs with older men, like, 45 years old. I was in interviews with them. I also think that that is the difference between that maybe entitlement piece that we're talking about because -- and I don't fault the younger millennials for that -- they're seeing 30-year-old men being CEOs and super-successful and getting billions of dollars, and so I think that's what they expect."

Golodryga asked, "How many of you still live with your parents or depend on your parents for financial help?"

Two of the younger millennials say they live with their parents. Corvette James added, "But I don't depend on them."

"How [is it] you don't depend on your parents but you live at their house? How does that work?" asked  another younger millennial, Luke Suchecki.

"So, I pay all my own bills, but I live with them," Calcillo replied.

So, about the notion that "Millennials are overly sensitive and need praise"?

There was a split when asked if everyone felt like they needed a trophy. "I think it's more of a respect thing," said older millennial Ronald Clark. "I think that a lot of what we do isn't respected, you know? I think that there's a disconnect with previous generations and us that there's not a respect for the skills that we do on a regular basis that they can't."

But Suchecki said, "Doing a job doesn't necessarily deserve a pat on the back. I mean, you have a job to do and you did it. It's not like, 'Congratulations, you did it!'  You just did it."

When asked on texting or emailing vs. talking on the phone, Kleiman suggested it's rude and intrusive to call someone.

"I think that it can be," Calvillo added, "depending on what you're calling for. For example, I work in a sales job. If I call someone, I feel like they are more annoyed with me than if they can just respond to a text on their own time."

Golodryga then asked each group to characterize the other. What were the older millennials perception of the younger set?

"I think overall younger millennials are very intelligent," said Colasurdo. "I think they are very entrepreneurial. I think that they are entitled, but I don't think necessarily believe that that is a bad thing in all cases."

Kleiman aid, "I think younger millennials had it a little harder than us in terms of the constant pressure and comparison from having social media all the time. But I think the challenge is going to be to kind of get better at listening in addition to sort of projecting and personally branding."

The younger millennials were then asked to describe their older peers.

"I agree completely," said Suchecki. "You guys are, like, the transitional generation or phase. And you guys are kind of spearheading our whole generation as a whole. So we're just following breadcrumbs. So lay the bricks!"

Joining "CBS This Morning," Amy Emmerich, chief content officer at the destination website Refinery 29, talked about the misconceptions of millennials.

"I think 'millennial' became bad word for a hot second because people believed that they were lazy and [felt] entitled, but the laziness is really more about self-care," Emmerich said. "They may not be in the office from 8:00 to 8:00, but they're much more about involvement -- how can they be better at their work-life balance?"

And the notion of entitlement, she said, "is about entitled to be seen and heard, and I think that's where they're really kind of pushing the idea of representation across media and other lines."

"Yes, absolutely. But you know, this generation is one of the most financially-literate of many, many generations. But the older set of millennials are much more focused on that long-term planning, while the younger set is much more about experiences, living in the now: how do I bottle up the now, and how do I drive with my passion?"

Co-anchor Gayle King asked, "What do you think that they're concerned about that other generations are not?"

"Societal norms, and breaking those down," replied Emmerich. "They grew up with social media. They are allowed to say that what is motherhood, career, relationships is not the way the generations before wrote rules, so they're rewriting them across the board. I think that until they feel it fits more of who they are, they expect us to all operate with more of a moral value and compass than businesses before. And until they succeed in that, they won't stop pushing."