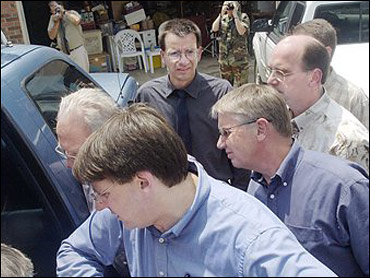 Coming soon to dozens of military bases around the country: radio signals strong enough to jam nearby garage-door openers.

Between now and 2008, the military is supplying a new radio system to roughly 125 bases that uses the same frequency as the one relied upon by more than 90 percent of the remotely operated openers, Pentagon and industry officials say.

The military radio signal is sometimes so strong that it overpowers the opener's signal, preventing the door from opening. Or it can also vastly reduce the opener's range, forcing the user to walk close to the garage before it will open.

Unless another solution is reached, the consumer will either have to live with the inconvenience or pay to fix the problem.

The cheapest fix would be to manually replace parts of the opener so it will use a different frequency -- probably a $60 job, said Mark Karasek, technical director of a manufacturers' group formed in response to the military radio rollout. Calling a technician to do it for you will probably run double that, he said.

This presumes consumers figure out what is wrong. When a garagedoor doesn't open, people will generally replace the battery, then the opener itself. A new opener can run $150 or $200 before installation.

Government and industry officials differ on how widespread the effect will be. The government predicts it will be limited; the industry says it will be worse but wants more information from the military.

"These things are generally in a relatively small radius around military facilities," said Michael D. Gallagher, chief of the National Telecommunications and Information Administration, which oversees government use of the airwaves. "The period of inconvenience is generally around when they start up the system. Generally consumers can try again after letting a short pause go by."

Linton Wells II, Pentagon acting chief information officer, predicted the effect will only be noticed within 10 miles of a base.

But Karasek said interference may be felt as far away as 50 miles. He estimated that at least 50-million garage-door openers in the United States use the same frequency as the new radios.

Beyond issues of convenience and cost, his group raises safety concerns about people who don't carry house keys being locked out of their homes.

The garage-door opener frequency at issue -- 390 megahertz -- has belonged to the military since around 1950. Openers have legally operated at that frequency since at least the early 1980s, Karasek said.

U.S. law allows low-power electronic devices to operate on military frequencies if they don't cause interference. It was a good frequency for garage-door openers because transmissions can penetrate the doors.

Also, until recently, the military did not employ it often, so the industry did not have to worry about interference. Garage-door openers are too low-powered to have any effect on military communications.

It is unknown how many garage doors are close enough to one of the 125 bases to be affected, and Pentagon officials refused to list which bases would receive the new radios. A spokesman said large bases are among those receiving them.

The interference was first discovered in recent months in two areas where the new radios were tested: Mechanicsburg, Pa., and Eglin Air Force Base, Fla.

In Florida, 127 people living within seven miles of Eglin complained of interference, officials said. In Pennsylvania, where a few bases started using the radios, more than 100 people contacted the local congressman, Republican Rep. Todd Platts, about the problem, an aide said.

Mechanicsburg resident Clifford Jones couldn't open his door at first. Now he can -- by walking to within a few feet of it with the remote.

"It's an inconvenience. It's not a crisis," said Jones, who is an advocate for keeping the state's military bases open.

The conflict arises from a radio spectrum increasingly congested by military and commercial users flooding the airwaves with communications, data and signals.

The new radios are part of an $800 million project to use the military's allotted airwaves more efficiently amid ever-growing needs, which now include vast transmissions of computer data, defense officials said.

"We're so dependent on communications and networking devices, and we're going to become more and more dependent," the Pentagon's Wells said.

All bases are getting new radios, with 125 receiving those that function at the frequency of garage-door openers. The radios are used for routine and emergency communications and training purposes.

The Defense and Commerce departments, the Federal Communications Commission and industry are starting discussions. Base commanders will be instructed to inform nearby communities the interference is coming.

Karasek said a solution may be for the military to program its radios to skip the garage-door opener frequency. Manufacturers may also have to start building garage-door openers that work on a different frequency, or are less susceptible to interference.