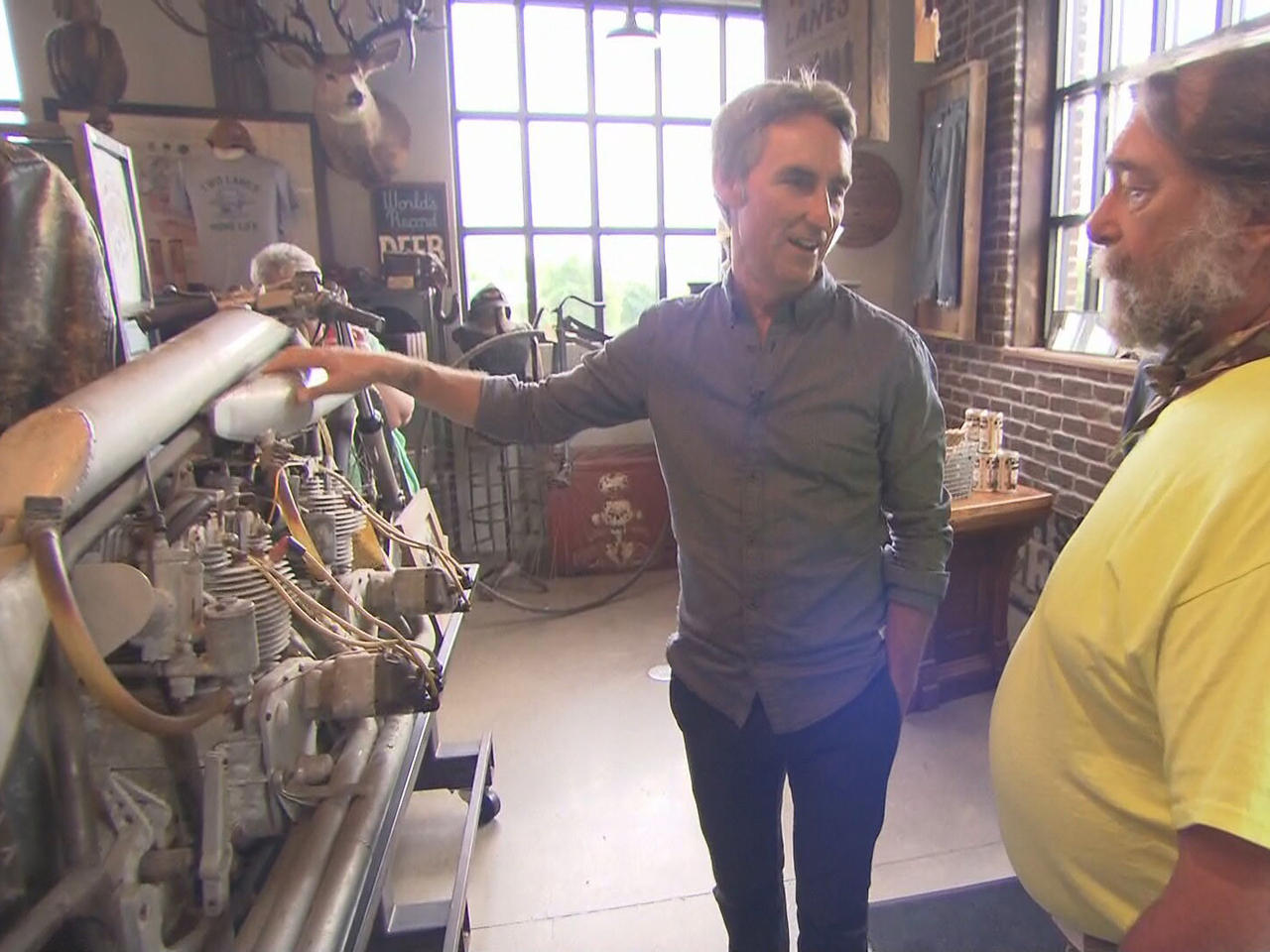 Antique stores are generally home for relics of the past, not newly-minted celebrities. But at Antique Archaeology, in Le Claire, Iowa, shop owner Mike Wolfe gives customer some star power along with the dust. "Every one of these people write my check," Wolfe said. "Every one of them do. So, I try to spend as much time as I can with them, and if we don't rise to the occasion all the time, then I feel like I failed."

If you recognize him, it's probably because you're not only into rusty bits of Americana, but you're also a viewer of the History Channel series, "American Pickers." It's like "Antiques Roadshow" mixed with an episode of "Hoarders."

Wolfe tried to sell the show for five years. But nobody really knew what a "picker" was, including the History Channel. "I said, 'Here's the deal, man: You're the History Channel, let's educate them. Let's tell them what a picker is!'" said Wolfe.

In short, it's someone who picks over other collectors' collections, hoping to buy a piece or two to give it a new life somewhere else.

With his longtime buddy Frank Fritz riding shotgun, they drive some 70,000 miles a year, hunting for pieces of history that capture their attention. "When you walk into an antique shop, chances are 95% of the time, that dealer is not buying all of that stuff," said Wolfe.

"It comes from folks like you?" asked correspondent Lee Cowan.

"Yeah, exactly. We're in the trenches, we're on the front lines looking for these things for them."

But for Wolfe, the show, and his career, aren't really about the hunt – or surprisingly, even peddling what they find. It's about the people in small town America who collect all this stuff to begin with.

"That's the passion of it for you?" asked Cowan.

"Do you think you're a little bit eccentric?"

"I don't think I'm smart enough to be eccentric," said Wolfe. "Don't you have to be smart, like super-genius like, to be 'eccentric'?"

Wolfe is the product of the rural America he finds to fascinating. He grew up the oldest of three kids in Bettendorf, Iowa, raised by a single mom. "My father left when I was two," he said. "My mom told me a story once that he was supposed to come for Christmas, and I stood there at the window all day looking for him and he never came."

His family couldn't afford luxuries like a bicycle. But one day, on his way to school, Wolfe spotted one in the trash. "It was one of those big garbage days. I was cutting through this yard, and I remember seeing it; it was a girl's bike. And I picked that up, and I was amazed that someone would throw out a bike! And so, I thought to myself, if someone would throw out a bike, what else would they throw out? So, that's why I started digging in the garbage, constantly, even if it wasn't a big garbage day I was always in the trash cans and stuff!"

He still spends his days that way. He relishes rust in the way the rest of us savor a glass of wine. He especially digs motorcycles – old Harleys and Indians have a habit of making their way into his own collection. "All of these things in here were someone else's dreams," Wolfe said. "They were someone else's world. There's a magic to it; it's magical."

And that magic doesn't just stop with rescuing old relics in those small towns. Sometimes it's trying to save the towns themselves. Wolfe has become a one-man preservation army. He's spent millions buying and restoring old Main Street buildings. He started in his native Iowa – Le Claire, specifically – and then expanded his restoration efforts to the charming little town of Columbia, Tenn., outside Nashville.

"I love old buildings; they speak to me," he said. "They really have personalities. When I walk into a building that has such historic presence, it gives me the chills."

One of his projects includes an old Chevy dealership, built in 1947. He's turning what used to be the showroom, into brand-new retail space.  "This was, like, a huge asset, like a flagship for the community, and that's kind of, to be honest with you, what I want it to be again," he said.

The oldest building he's rescued is one built in 1857, which he bought three-and-a-half years ago. Now, it's a bustling bicycle shop. Above the showroom are two AirBnB apartments for those who want to experience small town Main Street for the night.

"These aren't just buildings, and these aren't just small town corridors," Wolfe said. "All of these places matter for one reason or another, and some can survive, some can't. But if we don't try as individuals, then who are we as a society?"

It's such a passion of his that when he was younger it led him, in Le Claire, Iowa, to run for city council for no other reason than to help restore Main Street. "I ran for city council, because I used to walk down these streets and night with my dog, and think about what this place could be."

One of the restorations he's most proud of is one that used to be Le Claire's grocery store. And he's not done yet. He wants to buy more, before they crumble away. "I tell people all the time: If you want to see small town America, if you want to see Main Street, get in your car and drive and go take a trip with your family, because it is disappearing rapidly,'" he said.

To Mike Wolfe, the past isn't just bits of rusty gold. It's a reminder of where we came from, a lifestyle we can still touch and learn from, if we give our Main Streets a chance to speak.

Cowan said, "You almost talk about some of these towns like a first date."

Wolfe laughed: "You know what? I do have emotional affairs with a lot of these communities!

"This is our time to make a difference. If I can do that in any way, I want to be a part of that," he said.