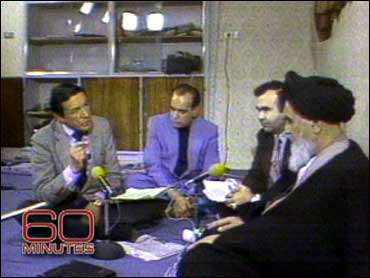 In this age of shock jocks, screaming matches on cable TV and radio call-in shows that thrive on rumor and speculation, Mike Wallace looks positively saintly.

True, he's tough and sometimes rough. But as correspondent Steve Kroft reports, he's always in command of the facts — and often knows them better than the person he's interviewing. There are some journalists who have learned, or stolen, from Mike Wallace much of what they know about the business, particularly: asking the impertinent question.

For a refresher course, Kroft sat down with Wallace in Studio 33, where 60 Minutes is put together every week. They watched the tape of some notables who've been caught over the years in the Mike Wallace meat-grinder.

In 2005, for instance, Wallace interviewed Vladimir Putin; Putin may be president of Russia, but it was clear that in this interview, it was Mike who was in charge.

"Corruption is everyplace in Russia. Agreed? Why? To get anything done: money," Wallace told the Russian president.

"I'm nosy and insistent and not to be pushed aside," Wallace explained.

Wallace is also an equal opportunity offender. Six years ago, he interviewed Jiang Zemin, then the president of China.

"You are the last major communist dictatorship in the world," Wallace said to Zemin. "Am I wrong?"

"Of course. This is a big mistake," Zemin replied.

"You are," Wallace said.

That kind of audacity is something Wallace perfected long before 60 Minutes.

"Up to Night Beat, I was utterly anonymous. Night Beat was the one," Wallace recalls.

Night Beat, and the spin-offs Wallace did for ABC, revolutionized TV talk. "We were doing the kind of show that had never been done before. Nasty questions, abrasive questions, confrontational questions," Wallace explains.

One famous exchange on Night Beat was with labor leader Mike Quill.

"And you have no right to sit in judgment of me," Quill said on the program.

"I'm ready any time you want to repeat the stupid question," Quill responded.

The similarities with 60 Minutes were striking. In 1957, Wallace interviewed mobster Mickey Cohen.

Asked how many men he had killed, Cohen told Wallace, "I have killed no men that, in the first place, didn't deserve killing."

Asked who the first person was he ever killed, Frattiano said "Frankie Nicoli," and explained that he had strangled him in his house.

"We strangled him. But I think it would bother me if I killed an innocent person,"

"What do you mean by 'innocent person?'?" Wallace asked.

He has also gone with great relish after small-time crooks, cons and miscreants of all sorts, showing up unexpectedly in offices and businesses with a camera team in tow. The interview subjects were often stunned by the ambush and often took evasive action.

"And the audience obviously just loved it," Wallace admits.

"If you had so much fun, and the audience loved it, why did you stop doing it?" Kroft asked.

"Because it became a caricature of itself," Wallace explains. "We realized we weren't getting information, we were getting drama."

"Mike, you have something against drama?" Kroft asked.

"Oh, no. But to do it just to make somebody look like a fool or embarrass them or whatever, after a while, uh-uh," says Wallace.

Over the years, Wallace developed his own special shorthand vocabulary for dragging information out of people. His stock phrases include "Come on," "Look," and "Forgive me."

One example of "forgive me" could be found during Wallace's famous 1979 interview with the Ayatollah Khomeini, when Wallace asked the ayatollah if he was nuts.

"Imam, President Sadat of Egypt says what you are doing is a disgrace to Islam. And he calls you, imam, forgive me, his words, not mine, a lunatic," Wallace asked the ayatollah.

"I figured, what the hell are they going to do, make me a hostage too, if I ask," Wallace remembers. "The guy that was translating, he looked over at me and said, 'You're the lunatic if you think I'm gonna translate that question to the ayatollah."

"And it got the ayatollah's attention for the first time," says Wallace.

But the classic Wallace question — or non-question — is the damning list of White House crimes he read to presidential aide John Ehrlichman in 1973, at the height of the Watergate scandal.

"Laundering money in Mexico. Payoffs to silence witnesses. Perjury. Plans to audit tax returns for political retaliation. Theft of psychiatric records. Spying by undercover agents. Conspiracy to obstruct justice. All of this by the law and order administration of Richard Nixon," Wallace said to Ehrlichman.

After a pause, Ehrlichman said, "Is there a question in there somewhere?"

"Can you think of being more satisfied than getting that response from John Ehrlichman?" says Wallace.

Asked if he asked a follow-up question, Wallace says, "I didn't need to. What you've done is the bill of particulars about the law and order of Richard Nixon."

"And a plea of no contest," Kroft remarked.

When he met Tina Turner for the first time, the singer told Wallace he'd have to be good to her.

In many ways, Turner's gentle plea to Mike before their interview 10 years ago speaks volumes about his talents and his reputation. He was nice to her. But soon he went right back to his not-so-nice ways — with Charlton Heston, for example.

"It sounds to me a little bit like the language of the quintessential, forgive me, 'nut case right wing zealot,'" Wallace said to Heston.

"This is what some people say about you," Kroft said. "That you're a grandstander. That you're the most important person in the story. That you're more important than the story sometimes. That you're egotistical, occasionally cruel. And for many people, well-mannered people, the embodiment of everything that they hate about reporters."

"I've gotta plead guilty, I suppose," Wallace replied. "You know, but it comes with the territory. It certainly has come with my territory."
Produced By David Browning/Warren Lustig

Iran's president rails against Israel and U.S. sanctions
Thanks for reading CBS NEWS.
Create your free account or log in
for more features.
View CBS News In
CBS News App Open
Chrome Safari Continue
Be the first to know
Get browser notifications for breaking news, live events, and exclusive reporting.