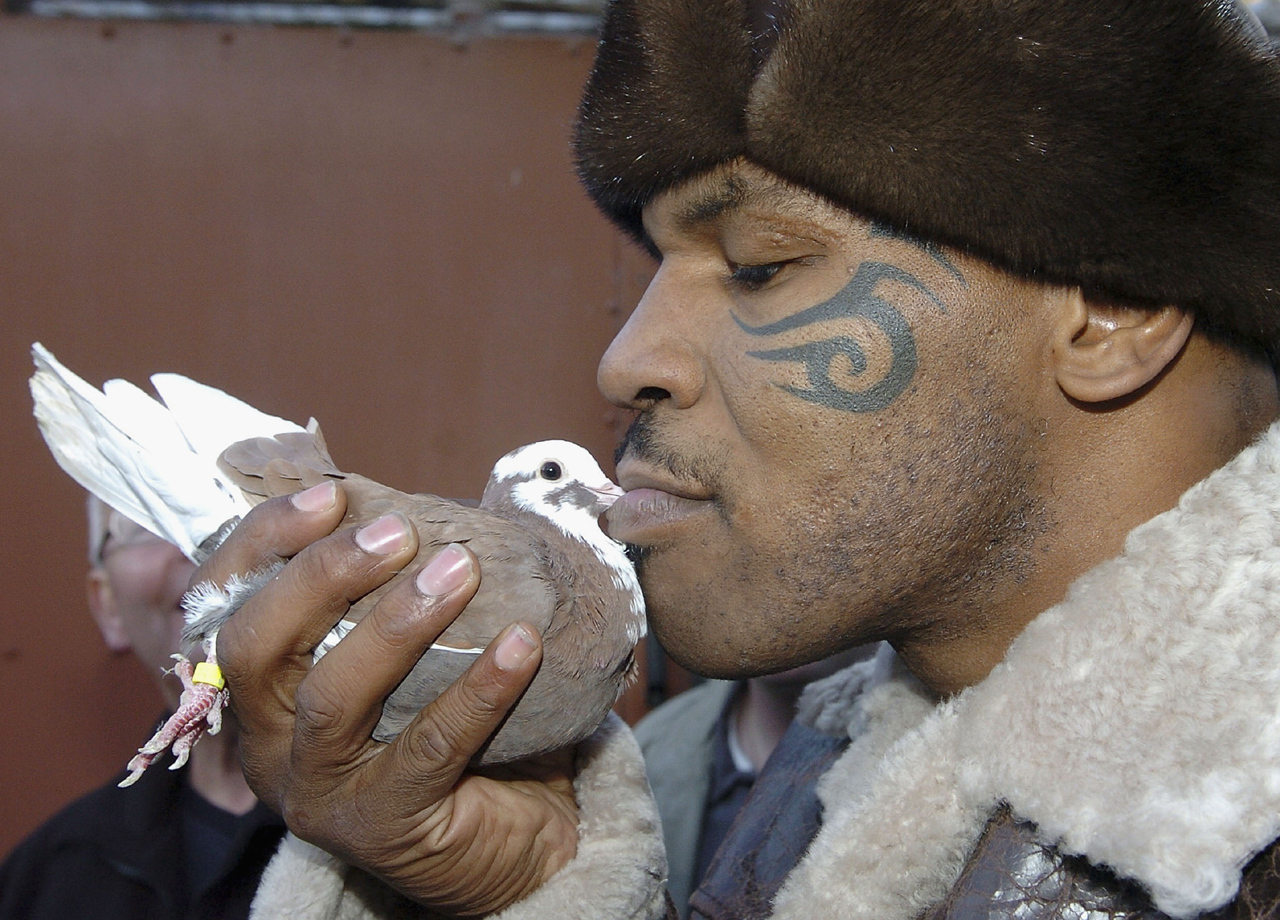 In his prime, "Iron Mike" was as formidable a boxer as ever entered the ring. Mike Tyson used to make headlines outside the ring as well - but now he's retired and, he says, far more laid-back than he was in his bad old days. Bill Whitaker has a Sunday profile.

If you were around in the 1980s and '90s, you surely know Mike Tyson. A braggart, a brawler, he was the youngest, undisputed heavyweight champ ever. Iron Mike, the self-proclaimed "baddest man on the planet" was one of the richest, most recognizable athletes in the world.

His successes in the ring were matched only by his excesses outside it: the women, the drugs, the crimes, the controversy. But that was then; this is now. At 45, he's shed 150 pounds and a lot of old baggage. He turned away from his outsized lusts and lifestyle, trading them in for the sun-drenched suburbs of Las Vegas, and endless time with his oldest friends -- his pigeons.

"These are all the birds that I bred," says Tyson. "These are my babies."

It's a passion he shared with the audience of Animal Planet in a recent series, "Taking on Tyson."

He's father of eight, but never spent much quality time with the older ones.

"I've never been hands-on, consistently, like this," Tyson says. "You know, I know I should be shot in the head, because I never experienced that, because that's what I was. I was so in love with myself, that I had no competitors."

The job now? Well, he's fighting to change his life. In some ways, he's been doing that his whole life. Abandoned by his father as an infant, raised by his mother, he grew up poor on the meanest of Brooklyn's streets. His first fight was over one of his birds.

As a young man, his pigeons meant the world to him.

"They're like my brothers and sisters," Tyson said once. "My friends. 'Cause I don't have to worry about them asking me for any money or try and get over me or do anything or try to hurt me for any reason."

Still, he seemed headed for a life of crime until legendary trainer and manager Cus D'Amato threw him a lifeline: boxing. He was good at it -- tough and disciplined.

"You liked it?" Whitaker asks.

"I thought it was cool, because Cus and them kept saying nice things about me every time I did it and I liked hearing the nice things," Tyson says. "I was born in hell and every, every time I do well, it's one step out of hell. So yeah, I enjoyed that a lot."

"It took you places?" Whitaker asks.

"Took you quite high," says Whitaker.

"Brought me quite low, too," says Tyson. "But you know, in order to fail greatly, you have to attempt to succeed greatly. The two come together."

When he was at the top of his game -- electrifying and terrifying -- he was at the top of the world: vanquishing contenders, flouting convention, living the high life on his terms. Earning, by some estimates, as much as $400 million - more than enough to feed all his appetites.

"Yeah, no doubt. You know, I kept getting in trouble, didn't stop."

Trouble with women: his first marriage dissolved amid charges of spouse abuse. He was convicted and served time for rape. And he perpetrated one of the most infamous acts in modern sports history: In a 1997 comeback match, he bit Evander Holyfield's ears, tearing off a piece of one. Tyson really never came back from that.

"I'm sorry that I bit him because I started really liking him again," Tyson explains. "He's a good guy, you know what I mean? I was just pissed off and I bit him. Undisciplined. I'm sorry. I didn't mean to do it."

"I can't handle being that guy," Tyson continues. "You know, that guy's a creation. Iron Mike, the baddest man on the planet. There's nobody like that. People like that don't exist. I just had the audacity, the idiocy, to say it."

"What do you think of that Mike Tyson when you look back on him?" Whitaker asks.

"I don't know," says Tyson. "It's kind of scary. I wouldn't want to be that guy any more. And I get it now. I didn't get it before. That's a very scary guy by me. This guy here was next to that guy, I would be uncomfortable."

His career on the mat, he filed for bankruptcy in 2003, and soon retired from boxing. He says it's the best thing he ever did.

"Well, that's good," says Tyson. "I have my wife and my kids. I had all the pleasures you could ever give me and still it doesn't match up to my ankle compared to my wife and my children. And they like me and respect me, a little bit at least. So it can't even compare to that. It can't. Not even a little bit."

Staying on the straight and narrow has had its ups and downs. He's had recent brushes with the law: a cocaine conviction in 2007; and arrested for scuffling with a photographer in 2009. But he's been to rehab and is now nearly three years sober. He knows skeptics will think this new Mike Tyson is just another act. He wonders if he's fooling himself. From his suburban enclave he can see Las Vegas shimmering in the distance, where he once was up in lights. He says resisting the pull of the past is the hardest fight of his life.

"My life is a struggle," he says. "I thought you knew that when you came here. This is not easy. In order for me to make this work, I have to kill my ego. I can't have an ego in order to allow this to work."

He struggled to hold on when his four-year-old daughter, from a previous relationship, died in a freak accident two years ago.

"Did that change you?" asks Whitaker.

"You know, I like to use that for the excuse," Tyson says. "My daughter dying. You know, it sounds great. For television, too. My daughter died, and that changed my life. My life changed, I'm not a scumbag no more. I like to believe that was the reason why I changed. And I also like to believe that I'm just tired. And I'm a stupid, foolish old man, and I need to get my life together."

He calls himself a work-in-progress. While he hasn't given up all vestiges of the past - he still likes the tattoo ("I love this tattoo, Bill. I love it, Bill. This tattoo looks like it's going to kick your ass, Bill, doesn't it?") - he reads a lot, too.

"From Pericles to Plato, Machiavelli, Mark Twain," he tells Whitaker, of his reading list.

And he's discovered his funny side. He had audiences laughing in the hit movie "The Hangover."

He returned in "The Hangover Part II," this summer. He says it helps pay the bills.

"Did you know you could be funny?" asks Whitaker.

If his career's a joke, it doesn't make him laugh.

"Look at this stuff," says Whitaker, of mementos from Tyson's past. "This is history here. You are history."

"This is garbage," Tyson responds. "I can say I bled for garbage."

"So this is meaningless to you?"

"No," Tyson says. "At one time it meant a lot - when you're just a young kid, this is everything to you. But then you realize your priorities change. And you just want your children to be happy and do nice things and that makes you happy. This stuff is nothing. This is just nothing, man."

Keeping his family together, keeping his life together - well, they don't give belts for that. But succeed in this arena, and he might truly be a champion.

"This is pretty interesting," says Tyson. "I like this life right now."

"When in your life has been the best time?" Whitaker asks.

"Now!" Tyson says. "Now! Right now supercedes all those championship belts, all that money, all that liquor, all that dope. Right now."

Inside the secret world of the Freemasons

Graham Nash: "It's never been this weird, has it?"