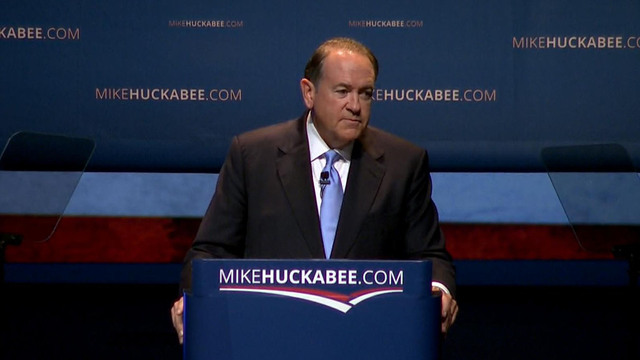 While some presidential candidates are entering the debate on whether the Confederate flag should continue to fly near the South Carolina Capitol following the deadly Charleston shooting at a historic black church, 2016 candidate Mike Huckabee believes that the contentious symbol doesn't have "anything to do whatsoever with running for president."

"For those of us running for president, everyone's being baited with this question as if somehow that has anything to do whatsoever with running for president, and my position is it most certainly does not," Huckabee, a former Arkansas governor and Baptist preacher, told NBC News on Sunday. "People want their president to be focused on the economy, keeping America safe. I don't think they want us to weigh in on every little issue in all 50 states."

The Confederate flag, which flies at a state monument near South Carolina's Capitol building, has become a flashpoint issue since Wednesday's shooting at a Charleston church claimed the lives of nine black community leaders.

The Charleston shooting, which took place at Emanuel African Methodist Episcopal Church, was reportedly motivated by race and is currently being investigated as a hate crime. The suspected murderer, 21-year-old Dylann Roof, has been pictured with Confederate flag plates on his car and had apparently published an online manifesto on white supremacy. He appears in photographs raising the Confederate symbol, burning the American flag, and wearing a jacket with flag patches from apartheid-era South Africa and Rhodesia (now Zimbabwe).

"If the state government of South Carolina wishes to address an issue in their state, that's fine," Huckabee continued Sunday. "If you can point me to an article and section in the Constitution in which a United States president ought to weigh in on what states use as symbols, then please refresh my memory on that."

During Huckabee's first presidential run in 2008, he also commented on the Confederate symbol ahead of the South Carolina primary.

"You don't like people from outside the state coming down and telling you what to do with your flag," Huckabee said seven years ago at a campaign stop in Myrtle Beach, South Carolina. "In fact, if somebody came to Arkansas and told us what to do with our flag, we'd tell them where to put the pole."

When pressed about that position, the White House hopeful added Sunday that "I still feel like it's not an issue for a person running for president."

Huckabee isn't the only GOP contender who has spoken out about the Confederate flag and how it isn't an issue for a president to tackle. Former Pennsylvania Sen. Rick Santorum, who announced his bid for the White House in May, said Sunday that the executive branch should have "no role" in whether the Confederate symbol should fly on government grounds.

"Like everybody else, I have my opinion," the presidential candidate continued. "But I think the opinion of people here in South Carolina and having them work through this difficulty is much more important than politicizing it."

Other contenders vying for the White House have also offered their opinions on the Confederate flag controversy.

Former Florida Gov. Jeb Bush posted to Facebook on Saturday that he was "confident" South Carolina leaders would "do the right thing."

"In Florida, we acted, moving the flag from the state grounds to a museum where it belonged," Bush wrote. "This is obviously a very sensitive time in South Carolina and our prayers are with the families, the AME church community and the entire state. Following a period of mourning, there will rightly be a discussion among leaders in the state about how South Carolina should move forward and I'm confident they will do the right thing."

South Carolina Sen. Lindsey Graham has also defended the flying of the Confederate flag, saying the symbol "works here, that's what the statehouse agreed to do. You could probably visit other places in the country near some symbol that doesn't quite strike you right."

Some, like Texas Sen. Ted Cruz and Florida Sen. Marco Rubio, have said they would leave the issue up to South Carolina.

"The last thing they need is people from outside the state coming in and dictating how they should resolve that issue," Cruz told the Washington Post on Saturday.

Rubio echoed that sentiment to reporters, saying that South Carolina residents should "not have a bunch of outsiders going in and telling them what to do."

Republican presidential candidate and former tech executive Carly Fiorina added that she believed the Confederate flag is "a symbol that is very offensive to many."

"But my personal opinion is not what's relevant here," Fiorina said to reporters at the Faith and Freedom Coalition's "Road to Majority" conference in D.C. "What's relevant here is what the people of South Carolina choose to do next."

Meanwhile, one-time presidential candidate and former Massachusetts Gov. Mitt Romney has called to take down the symbol to honor the shooting victims.