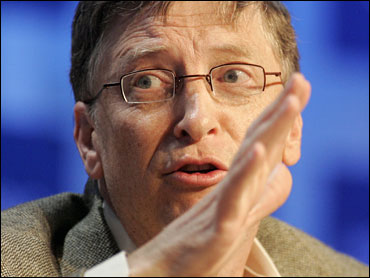 Microsoft Corp. has told about 1,000 technology contract workers to take seven days off the job, without pay, in a cost-saving move that came as the company unveiled a series of new perks for its internal staff.

The software giant meanwhile is having a big week – as chairman Bill Gates talks about its latest innovations at the Windows Hardware and Engineering Conference (WinHEC) in Seattle, addressing about 3,500 people who make their living designing and selling products that work with Windows.

In his keynote address Tuesday, Gates - who retains the title of Chief Software Architect for Microsoft – is expected to focus on the company's latest innovations, especially the upcoming introductions of Office 2007, the Longhorn Server, and Vista – the new generation of the Windows operating system.

The new version of Windows, notes CBS News Technology Analyst Larry Magid, is important not only to Microsoft and its customers but also to the many hardware companies that hope to sell new and interesting products designed to take advantage of the new operating system.

About 1,000 of Microsoft's contractors around the world may find themselves watching the Gates speech on their home laptops, keeping up with the company during their unpaid days off.

Microsoft spokesman Lou Gellos said Monday that in addition to this week's time off the payroll, the contract workers – who are software developers – have been told to also schedule two additional days off.

Gellos said this is one of the first times that Microsoft has scheduled a short period of time off for its contractors. He said the company made the decision because it was running over budget in some areas as it headed toward the end of its fiscal year on June 30.

He stressed that the contractors' work is being delayed, not canceled.

"We want to be fiscally responsible here," Gellos said.

The vendors were informed of the decision at the beginning of the month. It affects workers in Redmond, India, and elsewhere, he said.

Gellos also said the decision is unrelated to a move, announced late last week, to offer new perks to its Redmond employees such as enhanced child-care benefits, access to dry cleaning and grocery delivery services, and better cafeteria food.

"I can understand why people might think that there is a connection, but there is not," Gellos said.

Also Monday, Microsoft said it is re-jiggering its compensation and evaluation system. The moves are widely seen as efforts to improve morale and keep up with competitors such as Google Inc., who also offer enticing benefits. Microsoft executives have said that one key to battling companies such as Google effectively is being able to get - and keep - talented workers.

In a memo to employees, Lisa Brummel, senior vice president of human resources, called the plan "a broad set of investments we are making to ensure that Microsoft continues as one of the world's best places to work, with great opportunities, great leadership and a great working environment."

Marcus Courtney, president of the Washington Alliance of Technology Workers, a tech worker advocacy group, said he thinks the two moves illustrate there is an unequal system for those who work at - but not for - Microsoft.

"It shows the unfair relationship that they have between Microsoft and these contractors," he said.

In addition to its tens of thousands of internal employees, Microsoft relies heavily on contractors for all manner of tasks. The company was involved in a long-running legal battle, beginning in the early 1990s, over its use of temporary workers, but it has since changed its practices.

Bill Wilson, a software engineer who has worked as a contractor at Microsoft for about six months, said he was surprised when he found out last week that he wouldn't be working - or getting paid - for seven working days beginning Monday.

Wilson, 57, said he might have made different financial plans if he'd known about the time off. But he was more concerned about some of his colleagues with younger kids and lower salaries.

Although Microsoft said it would not pay the workers, Gellos said the companies that provide the workers are free to schedule them at other jobs during that time. But Courtney said it he thought it was unlikely that workers could line up something else so quickly.

Gellos would not name the companies providing the workers.

But Plano, Texas-based EDS Corp. confirmed that it contracted fewer than 25 of the workers. Companies often ask EDS to make changes like this and such flexibility is one reason they use contract workers, spokesman Travis Jacobson said.

"To us, this is just business as usual," he said.