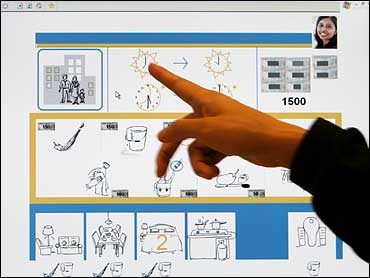 Can someone who doesn't even know how to read or write use a computer?

Microsoft Corp. is probing that question at a research lab in India.

Working with a local advocacy group, Microsoft has developed a prototype of a system that would connect illiterate domestic workers in India with families seeking their services. The system uses pictures, video and voice commands to tell women what jobs are available, how much the jobs pay and where they are.

The goal is to help the women see how technology can make finding work more efficient, as the first step toward creating broader tools to help illiterate people benefit from technological advances.

The software was on display Wednesday as part of Microsoft Research TechFest, an annual gathering of employees from the company's various research and development centers. The researchers, located in China, India, England and the United States, provide the company with a mix of far-flung technology and more practical applications.

Researchers on the Indian project say they have had to overcome their preconceptions about how the technology should work, and why people would want to use it. Kentaro Toyama, a researcher overseeing the project, said the first big hurdle was to understand what kind of computer images actually made sense to the domestic workers.

A photograph of dirty dishes, for example, was too precise — the women thought those were the actual dishes they were supposed to wash. But a realistic cartoon, with water running over dishes, worked well.

Also, the women associated neighborhoods with landmarks rather than addresses, so an interactive map and verbal directions had to be tweaked to represent that.

Even after extensive revisions, the researchers found that while the women understood how to use the technology, they had trouble seeing why a computerized system for finding work was better than traditional word-of-mouth.

The researchers eventually created a video — with popular "Bollywood" movies in mind — showing a woman complaining to her spouse that she needed another job, and using the computer to find it. That worked.

The researchers say they are now trying to figure out how to implement the system, since most women who do domestic work don't own computers. One option is to put up a kiosk in a community center, Toyama said.

Raj Reddy, a professor at Carnegie Mellon University who is also working on ways for illiterate people to use computers, said his early research in rural Indian villages showed a disconnect between what people think rural residents need from technology, and what those people really want.

For example, Reddy said, if you give someone in a remote area a telephone, car or television, you'll get nothing but gratitude.

"But if you go to them and say, `I'll give you a PC,' they have no clue what the hell you are talking about," he said. "That's the problem I am trying to solve. I am trying to say, `This is not a PC. This is an appliance which can take on many forms."'

Reddy thinks people in rural India with few literacy skills will initially be most interested in using a computer to do familiar tasks. For example, they might want to talk to their family via computer-based videoconferencing or use the computer to watch a video.

From there, he hopes, researchers will be able to teach them that the computer can also help them order farming supplies or get medical care for a sick child.

For that reason, Reddy, who is also on Microsoft's technology advisory board, said he thinks Microsoft's approach of using cartoon-like images may be ahead of its time. But he supports the company's efforts in a field that, he says, isn't getting nearly as much attention as it should.