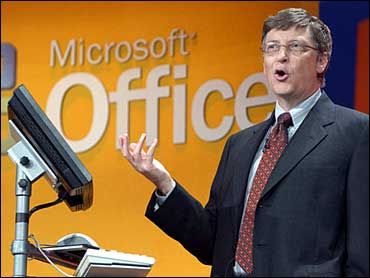 Microsoft Corp. has launched the newest version of its Office software, kicking off a $150 million ad campaign in hopes of convincing customers that the upgrade is worth the cost despite a skittish economy.

Investing in Office 2003 will improve collaboration among workers and boost business productivity without the need for serious hardware upgrades, Microsoft chairman and chief software architect Bill Gates said Tuesday in an interview with The Associated Press.

"Other than the mobile phone, really the only thing that's making (workers) more effective is the software," Gates said shortly before unveiling the new products on a Manhattan theater stage.

The launch reflects a big strategy shift for the world's largest software maker as competitors chip away at Microsoft's dominance by offering cheaper business programs, some based on free Linux open-source technology.

More than just pushing improvements to its traditional core Office suite -- a package including Word document-processing, Excel spreadsheet and PowerPoint presentation products, Microsoft is now trying to distinguish itself from competitors by touting the overall system behind the new Office.

That system is powered by expensive server software that makes sharing resources and working in teams easier, whether from desktop computers or portable wireless devices.

Gates dismissed the challenge from open-source programs such as Linux, which is gaining adherents in the public and private sectors.

"The distance between what we have and what the free software has is greater today than it's ever been," he said. The new Office product's biggest competitors, he said, were its predecessors, most recently Office XP, released two years ago.

Microsoft has reason to be protective of its turf.

The company's Office launch is a strategy shift for its second most-profitable business division. The Office products have 400 million users, Microsoft's business software accounting for $9.2 billion in sales in its 2003 fiscal year, with operating profits of $7 billion -- a 76 percent profit margin. The division is second only to Microsoft's core Windows operating system business in revenue and profits.

But the Office 2003 campaign, analysts say, must contend with a time of tight technology spending. For companies that did not sign up for multiyear licensing programs with Microsoft, the new Office package may not be compelling enough to justify an upgrade, said Joe Wilcox, with Jupiter Research.

In addition, companies may not like that they need to buy new server software to get the full benefits of many new features, he said.

The Office suite ranges from $149 to $499, depending on edition -- student/teacher, standard or professional. Server software, however, costs thousands of dollars. The SharePoint Portal Server application, which facilitates teamwork, retails for $5,619.

Companies aren't convinced that the Office system is better than how they currently operate, said Ted Schadler, an analyst with Forrester Research. "They're not quite able to visualize why a consolidated communications and collaboration platform is a whole lot better than what they're doing today," he said.

Changes in the core programs are fairly modest except for a major revamp of the Outlook e-mail, calendar and address book.

Programs in the package also now let users store files in the Internet-friendly XML format. They include a pane for researching topics in various online resources, and let users instant-message co-workers from within programs.

Microsoft also unveiled Tuesday its Information Rights Management software for controlling who may view, forward or print sensitive documents. Gates said customers clamored for ways to protect their intellectual property and confidential data, but critics fear the controls may also block collaboration across companies who operate on non-Microsoft platforms.

Among cheaper and free competitors to the Microsoft Office products that run on Windows, among other operating systems, are Sun Microsystem's StarOffice suite, which costs $79.95 and its free open source version, OpenOffice.

Although neither has an application that rivals Outlook in its versatility, StarOffice and OpenOffice boast compatibility with Office's main applications and analysts say those programs suffice for many companies.

Shares of Microsoft were unchanged to close at $29.35 on the Nasdaq Stock Market.
By Helen Jung