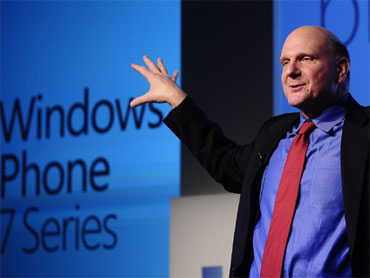 Apple Inc. rocked the wireless business by combining the functions of a phone and an iPod. Now, more than two years later, Microsoft Corp. has its comeback: phone software that works a lot like its own Zune media player.

The software, which was unveiled Monday at the Mobile World Congress, is a dramatic change from previous generations of the software that used to be called Windows Mobile. But Microsoft is, for now, sticking to its model of making the software and selling it to phone manufacturers, rather than making its own phones.

Microsoft's mobile system powered 13.1 percent of smart phones sold in the U.S. last year, according to research firm In-Stat. That made it No. 3 after Research In Motion Ltd.'s BlackBerry and the iPhone. But Microsoft has been losing market share while Apple and Google Inc.'s Android gained.

All the while, the market is becoming increasingly important. People are spending more and more time on their phones, and the devices steer people to potentially lucrative Web services and ads.

Phones with the new software will be on the market by the holidays, Microsoft said. All four major U.S. carriers will offer phones, just as they sell current Windows phones.

The new ones won't be called "Zune phones," as had been speculated. The software will be called "Windows Phone 7 series."

Forrester Research analyst Charles Golvin said the new software looked promising, but that it was also Microsoft's "final chance to get it right." He notes that those who have current Windows phones don't seem excited about the brand - many of them believe their phones are made by Apple or Nokia Corp., according to his firm's research.

Andy Lees, senior vice president of Microsoft's mobile communications business, said Windows Mobile suffered from the company's chaotic approach to the market. The software maker gave phone hardware makers and wireless carriers so much freedom to alter the system and install it on so many different devices that none worked the same way.

As a result, while other phone vendors such as Apple linked their hardware and software tightly to ensure a better experience, Windows Mobile might not have looked like it quite fit on a certain handset.

With the new software, "We really wanted to lead and take much more complete accountability than we had in earlier versions of the Windows phone for the end user experience," CEO Steve Ballmer said at the Barcelona launch event.

Microsoft is imposing a set of required features for Windows phones. Manufacturers must include permanent buttons on the phone for "home," "search" and "back"; a high-resolution screen with the same touch-sensing technology as the iPhone; and a camera with at least 5 megapixels of resolution and a flash. Hardware QWERTY keyboards will be optional.

A test device from Asus, which Microsoft used to demonstrate the new phone software for The Associated Press in Redmond, Wash., also had a front camera and a speaker.

The iPhone's success has spurred lots of look-alike phones with screenfuls of tiny square icons representing each program. Just as it did with the Zune, Microsoft has tried to avoid an icon-intensive copy of that setup. Instead, it relies more on clickable words and images pulled from the content itself. For example, if you put a weather program on the device's home page, it shows a constantly updated snapshot of conditions where you are, rather than a static icon that you have to click in order to see the weather.

The idea of pulling information from different Web sites, like Facebook, and presenting them on the phone's "home" screen isn't unique to Microsoft: Motorola Inc. and HTC Corp. have created such software for their own phones.

Windows Phone 7 Series borrows the clean look of the Zune software, departing from the more "computer screen" look of earlier Microsoft efforts. These were also reliant on the user pulling out a stylus for more precise maneuvering, while the software is designed to be used with the fingers. It's not clear how older third-party application designed for the stylus will work on the new phones.

Most of the built-in applications complement or connect with existing Microsoft programs or services, such as the Bing search engine. The games "hub" connects to an Xbox Live account and lets players pick up where they left off with multiplayer games. They will even be able to play games against PC users. Microsoft also turns to the Zune programming for the phones' entertainment hub, much in the way the iPhone's music library is called iPod. And when users plug the phone into a PC, the Zune software pops up to manage music, movies and podcasts.

About 18 months ago, Microsoft stopped most improvements to its existing smart-phone operating software and started from scratch on Windows Phone 7 Series.

Microsoft "is resolved at a company level to be successful in mobile," Lees said. He indicated Microsoft is willing to spend hundreds of millions of dollars on marketing to ensure it's successful.