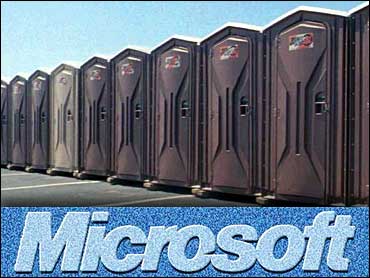 What's true with the iLoo? Microsoft Corp. and its public relations firm have changed their story — again — about whether its United Kingdom division had been developing an Internet-enabled portable toilet.

On Monday, three representatives for the Redmond software giant told news agencies, including The Associated Press, that an April 30 news release trumpeting the "iLoo" was a hoax and apologized for "any confusion or offense" for the joke.

But on Tuesday, the company reversed itself, saying the iLoo had been real — only it's now been canned.

"We jumped the gun basically yesterday in confirming that it was a hoax and in fact it was not," said Lisa Gurry, MSN group product manager. "Definitely we're going to be taking a good look at our communication processes internally."

It's a public relations embarrassment for a company that's famous for micromanaging news releases, interviews and promotional events.

"It's definitely not how we like to do PR at Microsoft," Gurry said.

The iLoo was described as a portable toilet equipped with a wireless keyboard and a height-adjustable plasma screen with high-speed Internet access. Microsoft's MSN division was "in the process of converting a portable loo to create a unique experience" in time for the summer festival season, according to the release.

Several news organizations carried reports of the iLoo project, including The Associated Press. An AP reporter specifically asked whether the reported project was a hoax, and received assurances last week from Microsoft, its PR firm, Portland, Ore.-based Waggener Edstrom, and another PR firm in London, Red Consultancy, that the project was real.

On Monday, technology Web site CNET, based on a tip, wrote that the iLoo was a hoax, and quoted Microsoft spokesman Nouri Bernard Hasan as saying, "I can confirm it was an April Fools' joke."

The AP and The Wall Street Journal on Monday also were told by two spokeswomen for the company that the iLoo was a fraud.

On Tuesday, Microsoft again reversed its story. The company had relied on bad information from a Microsoft employee in the United Kingdom who said it was a hoax, Gurry said. After more talks with people in London, the company determined it was a real project, after all.

The U.K. division likes to run clever and innovative marketing campaigns, Gurry said, and had thought an iLoo would appeal to the British. MSN typically allows its units to tailor their own campaigns to their regions, she said.

But MSN's executive team, which had heard of the iLoo through news reports, took the unusual step of killing the project on Monday, she said, believing that the portable toilet "wasn't the best extension of our brand."

It's still unclear how much work was ever done on the iLoo. Gurry said she did not know how much time or money was spent on the project.

The company had said it was building a prototype and was in the process of converting a portable toilet. But MSN marketing manager Tracy Blacher in London said Tuesday that the company had not done that. Rather, MSN had some discussions with portable toilet manufacturers, which she said she could not name because she was not at her desk.

Blacher, who described the project in the original news release where she was quoted repeatedly, said Tuesday she did not recall when MSN decided to kill the project. Gurry said that decision was made Monday.

Microsoft has not disciplined anyone yet and is currently just focused on clarifying what happened, Gurry said.

Not everyone was satisfied with Microsoft's explanation.

"If they're going to try to spin this as (if) it was some kind of a concept, that's a concept that should be flushed along with the iLoo," said Frank Catalano, a Seattle-area technology marketing consultant.

4 misconceptions about the black widow spider
Thanks for reading CBS NEWS.
Create your free account or log in
for more features.
View CBS News In
CBS News App Open
Chrome Safari Continue
Be the first to know
Get browser notifications for breaking news, live events, and exclusive reporting.