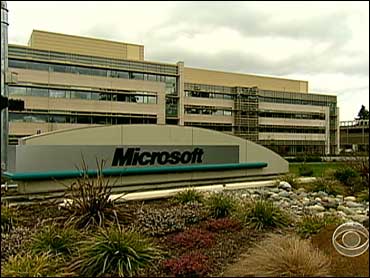 Millions of your stimulus tax dollars are already going to work in affluent Redmond, Wash., the home of Microsoft, where unemployment is among the lowest in the nation.

The stimulus money will help build a bridge over Redmond's only freeway, reports CBS News investigative correspondent Sharyl Attkisson. It's at a spot that happens to connect Microsoft's east campus to its west campus. The project has been on Microsoft's wish list for years, and includes fancy landscaping, a bike lane and pedestrian walkway.

Microsoft originally agreed to pay for 70 percent of the $25 million project, with Redmond picking up the rest. But costs escalated. The city asked Microsoft to pitch in more.

But Microsoft replied, "That this number is fixed," according to Marchione. "We're not budging."

That's when the city decided to try for stimulus funds to fill the gap. They got $11 million tax dollars.

Microsoft wouldn't agree to an interview. Sen. Tom Coburn, who voted against the stimulus bill, argues that tax money shouldn't go to help a company whose own reports say it has $20 billion cash on hand.

"How did we ever get to the point that we decided that we should, the federal taxpayer in Broken Bow, Okla., ought to be paying for a bridge to go between two Microsoft campuses in Washington? I mean, how did we ever get there?" Coburn ased.

The even bigger question, he says, is what's not being funded. Not far from Redmond, on the other side of the county, there's the 76-year-old South Park Bridge, so dilapidated that on the government's 100-point sufficiency scale, it only rates a four.

That's 10 times worse that the Minnesota bridge that collapsed two years ago. The South Park Bridge, in a poor section of the county, carries 20,000 cars a day atop corroded concrete and rotted timber. Fixing it would create hundreds of jobs and eliminate a serious public risk. But so far, the bridge isn't getting a penny.

Why are we funding a brand new project, when there's a bridge up the road that's a real hazard?

"The funding package was tied to economic development, not safety," Marchione said. "I can only play by the rules Congress gives me."

Engineers say the South Park Bridge will have to be shut down next year, if it lasts that long. Groundbreaking for the Redmond bridge is scheduled for June.