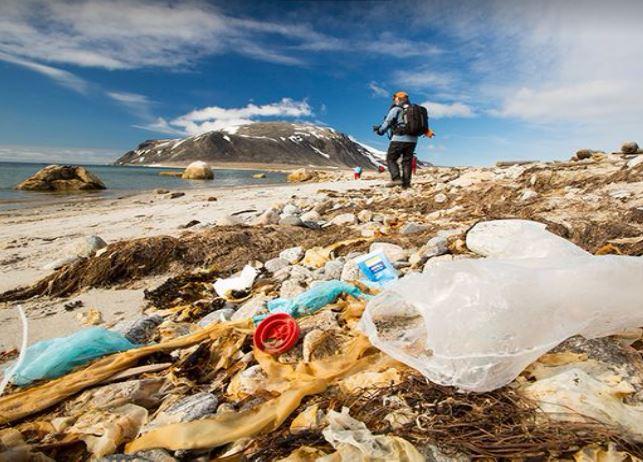 I first travelled to the Arctic Circle in 2013 after a biologist friend told me about a small village in Greenland under attack by polar bears. The iconic animals hunt seals on ice, which is now thinning because of climate change. With their frozen bridges gone, the bears turned to garbage cans, just like raccoons.

The piece was one in what became a long list of "hungry polar bear" stories to circulate on TV and online. The polar bear is the poster animal for our changing planet -- and for good reason. They are beautiful,

Endangered, and great click-bait. But they're not perfect messengers, because even when they are frail and starving, they're still awe-inspiring.

Earlier this year a global team of scientists sounded another alarm, revealing what they called the next major threat to the polar bears' Arctic habitat: plastic.

After spending five years tracking currents and collecting and analysing water samples, they estimated there to be around 300 billion pieces of plastic from all over the world floating in this once pristine ecosystem.

The story made headlines and gained traction on social media, but soon the unpredictable tides of news carried it back out to sea. A simple Google search a few months later turned up not a single television news report from the Arctic.

In an apparent attempt to get a few clicks, one article on the topic featured a fake photo of what appeared to be a passed out polar bear holding a plastic bottle of Coca Cola. To be fair, the photo was real, but the polar bear was in a zoo thousands of miles away from its allegedly plastic-plagued Arctic home.

So were the findings of this plastic research a myth? I mean if there were 300 billion pieces of plastic floating in the Arctic, where was the proof?

In late July my producer Leigh Kiniry and I asked our bosses to send us on a myth-busting expedition. The greenlight came quickly, and we grabbed photojournalist Abdi Cadani and set off for Norway's Arctic Circle.

It took three flights and a bumpy boat ride to get to our final destination, but once there, it only took a few minutes to find the plastic. Plastic's omnipresence in this remote region is a product of both our warming planet, and our unsustainable appetite for the material.

Norway's Lofoten islands are a dreamscape of jagged mountains and glassy water. It's so beautiful, Disney used the polar paradise as its muse when creating their blockbuster animation "Frozen." During the summer months, when some islands are thawed out, an unusual mission kicks into gear.

I first read about June Gronseth's "plastic patrol" online. She leads a group of volunteers who comb through the Nordic tundra, searching for garbage. Some of the photos she's posted to her website are unbelievable.

"There's so much beauty here, but if you look closely enough, you'll see the beast," she told me as our boat pulled up to a rocky coast.

"How many people live on the island," I asked.

"Here? Actually none. We're on our own," she said with a warm smile.

We may have been on our own, but everywhere we looked there were unwanted signs of life. Within minutes we had huge, industrial-sized garbage bag full of plastic junk. Everything from a Coca-Cola carrier with the words "Made in Venezuela" on it, to plastic rope and even a motorcycle helmet. Some of the plastic had been in the water so long you couldn't even make out what it was.

"The worst is plastic bottles. Water bottles. We see them everywhere," Gronseth told me as she fished out a plastic bag wedged between two rocks.

Gronseth began cleaning-up the arctic in 2012, after she found two birds caught in some plastic line.

"Trapped and dead in one piece of plastic on the beach," she said. "My eyes were wide open and I thought, 'we have to stop polluting our seas.'"

That discovery unlocked a dirty secret -- the Arctic Circle has become the world's dumping ground. In only a few years, Gronseth's team grew from a ragtag bunch of fishermen and local activists to a network of over 1,000 volunteers spread out over hundreds of miles. Last year alone they collected more than 40 tons of plastic.

The only way to remove it all from the remote islands was by airlifting it out with a helicopter.

Science has traced this trash back to its source. In April, two global research programs unveiled the results of their five-year study in the journal, Science Advances. They discovered a global conveyor belt of ocean currents like the Gulf Stream carry plastic all the way from the Americas and Europe to the Arctic.

"There is a continuous transport of floating waste from the North Atlantic," said Andres Cozar Cabanas, a Spanish biologist at the University of Cadiz and the leader of the study.

This waste enters the ecosystem a number of ways; small items like plastic toothpicks are often flushed down the toilet, beachgoers leave behind bottles and food packaging, and plastic that is thrown out can easily blow away from landfills and ending up in rivers or oceans.

Scientists say that, for the first time, melting ice has enabled this conveyor belt to dump plastic all the way up in the Arctic's northernmost regions, which were previously protected from the outside world.

Climate change has also made it easier for research vessels to gain access, and to measure the full extent of the problem. Cabana's team spent five months dipping nets into Arctic water and studying the results. While large floating objects are a concern, Cabanas says the soupy mix they discovered just under the surface is a bigger threat.

"The amount of floating plastic debris trapped in the surface waters is estimated to be on the order of hundreds of tons. It comprises around 300 billion pieces, mainly fragments around the size of a grain of rice," he explained. Those fragments are known as microplastics, broken down bits of bigger items like straws, Q-tips, plastic bags and water bottles. They're so small, marine animals often mistake them for food.

Faster than Bolt but Weighed Down by Plastic

You need a microscope and a quick eye to see the animal inside Marine Biologist Ceri Lewis' petri dish in her laboratory at England's Exeter University.

"They can reach speeds a hundred times faster than Usain Bolt," Lewis told me with pride. At just about an eighth of an inch long, translucent and scaly, the Arctic Copepod is far from "poster animal" status, but as Lewis explains, this shrimp-like crustacean is one of the reasons polar bears and other cute arctic species are able to eat every day.

Lewis' research monitors the health of the Copepod population, which has already been under stress from warming water. The new concern is microplastics, which Lewis told us the Copepods are starting to eat.

"When that happens, the animal's stomach tells it its full so it stops eating. That could kill it or stunt its growth due to a lack of nutrients which could have drastic effects on the health of the marine ecosystem," she said.

Lewis has already found several specimens of Copepods with plastic in their gut but said it's too early to tell how widespread the problem is.

Plastic has already invaded other parts of the food chain in our world's oceans. Roughly a quarter of fish sampled from markets in California and Indonesia had plastic in their guts, according to a study by the University of California, Davis.

Seabirds are also devouring the trash. The United Nations Environment Programme estimates that 99 percent of all seabirds will have ingested plastic by mid-century

The world is addicted to plastic. Consider this: in 1950 our planet consumed about 1.5 million tons of plastic. That number jumped to over 300 million tons by 2016. The United Nations says at this rate there will be more plastic than fish in the ocean by 2050. Scientists say there are simple measures people can take now to make a lasting impact. The biggest threat is single-use items like plastic bags and bottles.

According to watchdog group "Ban The Bottle," the average American uses about 129 plastic water bottles a year that are tossed in the garbage. If you do the math, that means Americans throw out over 40 billion water bottles annually.

Our dependency on plastic bags is even worse. According to the Environmental Protection Agency, Americans use over 380 billion plastic bags and wraps each year. Most of them wind up in landfills or are carried out to sea. Every year about 8 million tons of plastic is believed to escape into the oceans.

Back in Lofoten, June Gronseth picked up yet another plastic bag. She hates seeing them blanket the beach like Saran wrap but says she's happy she got to it first, before an animal did.

"I do hope that all people in the world get their eyes open and stop polluting the ocean, we have to stop now," she said.

Gronseth is hopeful, but knows kicking an addiction is difficult, which is why she'll be out here next season patrolling the Arctic, Earth's last paradise, now a new frontier for pollution.