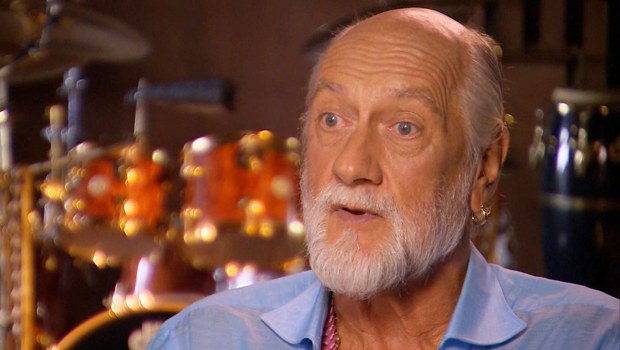 "Don't Stop" is the tune that rock band Fleetwood Mac serenaded Bill and Hillary Clinton with at the Inauguration Gala back in 1993. And "Don't Stop" is the band's guiding principle today , as its leader tells our John Blackstone . . . For The Record:

At his mountainside estate in Hawaii, Mick Fleetwood could be mistaken for an eccentric country gentleman, spending quality time with his pet pig, Tilly. "Sit! Sit!"

But Fleetwood is better known as the drummer of the group that shares his name: Fleetwood Mac.

In a rehearsal hall in Los Angeles, the five members responsible for the group's biggest hits are preparing for their first tour together in 17 years.

Stevie Nicks, Lindsey Buckingham, John McVie and Mick Fleetwood have been rejoined by Christine McVie, who left the band in 1998, swearing she would never come back.

For Mick Fleetwood, having the band complete again has come at the right time.

"I think it's about getting your house in order, without being overly heavy," he told Blackstone. "The reality is, I'm sitting here, I'm 67 years old, I'm certainly not planning on leaving anytime that I know of, but you do see the picture in a different way just because you're older."

As part of "getting his house in order," Fleetwood has just finished his autobiography, "Play On," out next month. Why a book now? "I don't write songs," he said. "So this is a version of me writing a song."

He writes about his divorces from three wives, and his failures as a father to his four daughters.

"I would imagine that someone reading this document would say that he's sort of sold his soul to his band," said Fleetwood.

Fleetwood fell in love with the drums as a boy. Self-trained, he moved to London at just 15, determined to make a living as a drummer

Asked to describe his drumming style, Fleetwood said, "I'm not being overly humble -- the easiest way, I don't really know what I'm doing. I do, but if I start thinking about it, I don't really do it horribly consciously, and I'm not super slick."

But he is a slick dresser. That started when he was a a struggling musician, and his friend Rod Stewart told him to spend whatever he had on one good suit.

"And then you're styling," Fleetwood said. "To this day I love, I love clothes. And I'm a shoe freak."

"You're certainly known for being colorful, interesting," said Blackstone.

"That makes me feel good, working so hard at it," he replied.

By the time he was 20 the English blues band he was in took the name Fleetwood Mac, combining his name with that of bass player John McVie. Over the next few years, other band members came and went.

Then in 1975, a new Fleetwood Mac emerged with a lineup that (along with Fleetwood) included two couples: fellow Brits John McVie and his wife Christine; and the Americans Stevie Nicks and her boyfriend, Lindsey Buckingham.

Fleetwood was the band's manager as well as the drummer.

"It was very hard," he said, " 'cause I wasn't the classic dude, the manager, the penny pincher. I just wanted to see everyone happy, including myself. So all our assistants had limos, so we'd arrive at an airport, there'd be, like, 20 limos -- for the lighting director, you know?"

They were making it big, but coming apart. Nicks and Buckingham were breaking up, the McVies heading for divorce, and Fleetwood's marriage was ending as well, just as they began working on their second album, "Rumours."

"Were there lots of problems? Yes," said Fleetwood. "But it was never like, 'Oh my God, you're not gonna get a band.'

"A lot of people around us, our record company, people around us were going, like, 'Okay, Mick, when are you gonna break up, 'cause I don't get how you're pulling this off.' All of us! It was the music. And we weren't about to turn away from it."

The fractured relationships showed up in the songs. "Go Your Own Way" was a message from Lindsey Buckingham to Stevie Nicks; "Dreams" was Stevie's message to him.

And Christine McVie's "You Make Loving Fun" was written about her lover, not her husband.

"A lot, yes," added Fleetwood. "As John McVie would say, a living soap opera, 'cause we're all ex-lovers and have shared houses together, and it's a scene."

Among those ex-lovers are Fleetwood and Nicks, who began an affair while touring for "Rumours."

"I was certainly in love with Stevie," he said, "and I think it's fair to say that she was likewise."

Blackstone asked who called it off.

Nicks said, "Mick did. Because we both knew that Fleetwood Mac was gonna go on probably longer than anybody's marriage, and that it was important that we be friends, so Mick and I just put our friendship back together."

Nicks and Fleetwood shared a huge appetite for cocaine that grew to legendary proportions when they were recording "Rumours."

"Drugs. The drugs and rock 'n' roll syndrome was alive and well during the making of that album," said Fleetwood. "Me and Stevie became the wicked partners, I think, in that. I think we spoke about it way too much. Certainly I had to address the stories. I still get, especially in England, 'Oh God, apparently you did enough cocaine to put a straight white line to the moon and back!'"

The drugs, along with the emotional crises, did not get in the way of the music. "Rumours" has sold 50 million copies.

Fleetwood managed the band for a decade, but eventually the excesses piled up. His bandmates fired him as a manager.

"And you spent too much of it?"

"Yeah, you spent more than you had?"

In 1984 Fleetwood was forced to declare bankruptcy. Other members of the band would go their own way. Buckingham quit the group for a decade in 1987; Nicks left for long stretches to pursue her solo career. Christine McVie retired.

But Mick Fleetwood played on wherever he could.

These days he plays with a couple of island bands he's put together back home in Maui -- even covering the occasional Fleetwood Mac song.

The stage is all his -- on the rooftop of the restaurant he opened two years ago.

"Why a restaurant?" asked Blackstone, of Fleetwood's on Front Street?

"I love talking, as you've gathered," answered Fleetwood. "And I love meeting people. And a lot of the components of a restaurant are actually very similar to running a rock and roll band, believe it or not. There's always drama. You have to put on a show every night. It's show time!"

And now, it's show time for Fleetwood Mac again. Rehearsals are wrapping up. The tour begins this week.