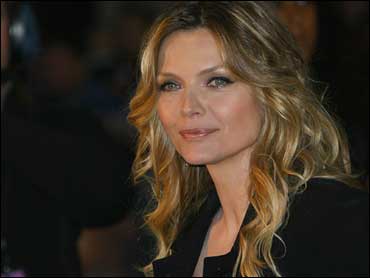 Michelle Pfeiffer's latest role is as Lamia, Queen of the Witches, who is determined to eat stardust to achieve eternal youth and beauty. Fortunately for Pfeiffer, she seems to have found them in real life.

Now 49, the three-time Academy Award nominee, whose career has spanned 25 years is, is growing old gracefully to say the least. The secret to her career longevity may be a mix of talent and looks. But Pfeiffer has long been considered one of the most beautiful women in Hollywood, and she's still turning heads.

Pfeiffer has in the past hotly denied claims she has undergone plastic surgery, and has said she is enjoying getting older. Now, she's co-starring with an eclectic all-star cast in "Stardust" as a woman who'd do anything to avoid getting old.

The Hollywood icon is in London this week promoting the movie, which tweaks our society's obsession with youth. In an interview before the premiere, she insisted the key to staying young isn't cosmetic surgery, on- or off-screen.

"I don't necessarily think that the pressure on actresses is any more than the pressure on women in general in our society," Pfeiffer said. "I think there's a huge amount of pressures where the cosmetic industry is [a] multi-billion dollar business, and there's been such a huge increase in plastic surgery, and it does seem like it's sort of spiraled out of control."

2"I don't think anybody will condemn anybody for a little something here and there," Pfeiffer added, "but it's really gotten crazy and [there's] a lot of distortion going on. I think people have lost sight in some ways of what is beautiful, and sometimes I see people, and I'm not really sure what's strange about them, but it's becoming less and less obvious what is strange about them because our sense of what is normal is disappearing."

"Stardust" and her role this summer in the movie "Hairspray" mark a comeback for Pfeiffer after five years away from the big screen. She has proved she is still striking on camera and popular with audiences, putting her in a stronger position than ever as an actress.

Pfeiffer spent her hiatus relaxing, painting, and spending time with her children Claudia Rose and John Henry. On her return, she may have swapped the glamorous roles of her youth for a manipulative villain and an evil fairy tale witch, but critics agree that her work is re-energized.

And, unlike the character she plays in "Stardust," Pfeiffer says she's happy to grow old. She recalls that an earlier interviewer asked her and co-star De Niro if they also would seek eternal youth. "My first response was, 'yeah'," Pfeiffer says. But De Niro's reaction changed her mind. "I don't know, he said, because then you would be alive and all the people you love would die, and I got all sad and I thought maybe it wouldn't be such a good thing," Pfeiffer says.