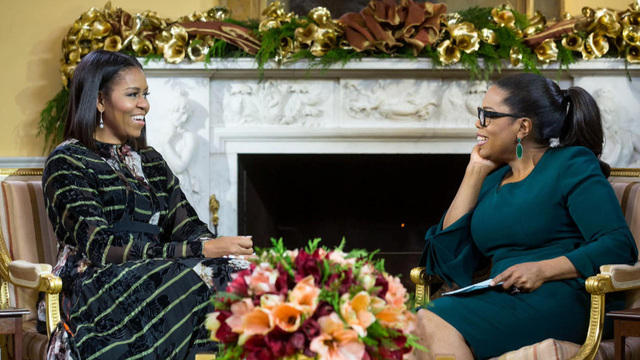 During her final one-on-one interview as first lady with Oprah Winfrey, Michelle Obama weighed in with frank commentary on America’s future, even as she reflected on the hopeful legacy of her husband’s administration.

“So your husband’s administration, every -- everything, the election, was all about hope,” Winfrey said in a clip that aired Friday on “CBS This Morning.” “Do you think that this administration achieved that?”

The first lady responded in the affirmative.

“Yes, I do,” she said, “because we feel the difference now.”

Mrs. Obama, who was one of Hillary Clinton’s most powerful campaign surrogates, and a fierce critic of Donald Trump on the trail, emphasized the contrast in the nation’s mood, just weeks before Mr. Trump is inaugurated to the White House.

“What do you give your kids if you can’t give them hope?” said the first lady. “You know, our children respond to crises the way they see us respond. You know, it’s like the toddler that bumps his head on the table...they look up at you to  figure out whether it hurts.  And if you’re like, oh, my God, they’re crying. But if you’re like, you know what, babe, it’s okay.”

Mrs. Obama further commented on how her husband had tried to serve as assurer-in-chief.

“I feel that Barack has been that for the nation in ways that people will come to appreciate,” she said. “Having a grown-up in the White House who can say to you in times of crisis and turmoil, hey, it’s gonna be okay.  Let’s remember the good things that we have. Let’s look at the future. Let’s look at all the things that we’re building. All of this is important for our kids to stay focused and to feel like their work isn’t in vain. That their lives aren’t in vain. What do we do if we don’t have hope, Oprah?”