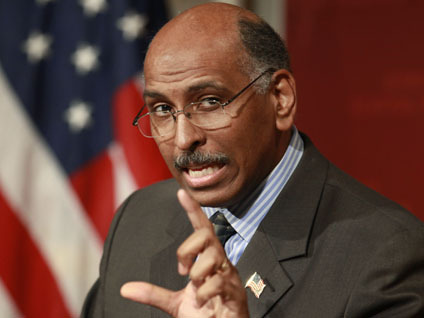 Republican leader Michael Steele, whose leadership has been questioned by some in the GOP, said this morning his job is a little bit tougher because of his race.

A viewer of ABC's "Good Morning America" asked Steele whether he thinks he has a smaller margin for error because he is African American.

"The honest answer is, 'yes,'" Steele said. "It just is. Barack Obama has a slimmer margin. A lot of folks do. It's a different role for me to play and others to play, and that's just the reality of it. But you take that as a part of the nature of it."

Steele said he will not give up his seat as head of the Republican National Committee, even though his chairmanship has been plagued by controversies, such as the recent revelation that the committee reimbursed expenses coming to nearly $2,000 for an outing at a topless, bondage-themed nightclub. Some have said the incident, paired with the RNC's other recent missteps could hurt the party's fundraising abilities.

"This kind of thing has got to stop, or they won't get any contributions," Sen. Jon Kyl (R-Ariz.) said yesterday on "Fox News Sunday."

Steele acknowledged today that "at the end of the day, I'm judged by whether I win elections and raise the money."

"That's a standard I'm very comfortable with," he said.

Even though the RNC spent more money than it raised in most months over the past year, Steele pointed out that the party ran successful gubernatorial campaigns in New Jersey and Virginia, as well as a successful long-shot Senate campaign in Massachusetts and numerous other special elections around the country.

"We have managed the money in a way that has allowed us to compete in some races that we otherwise wouldn't have been able to compete in," he said.