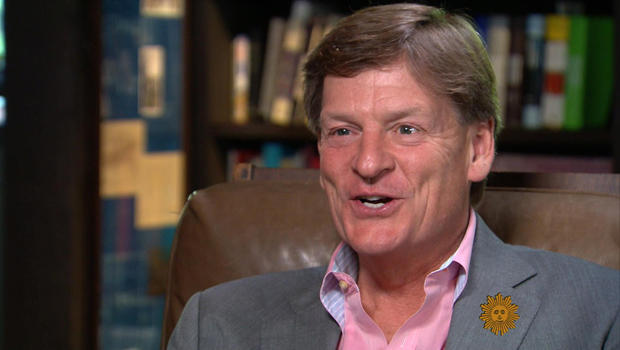 Do we base our big decisions on reason and logic, or on our gut? It’s a question underlying the fine print in the newest book by bestselling author Michael Lewis. He’s been talking with our John Blackstone:

Michael Lewis’ latest book, now finished, is going out to reviewers. When Blackstone asked if he worried about reviews, Lewis replied, “You want to just plum my anxieties? Because I’m happy to do this!”

Lewis would seem to have little reason to be anxious. He’s turned books about bond sales, baseball statistics and the housing crisis into bestsellers. But he admits his upcoming book, “The Undoing Project: A Friendship That Changed Our Minds” (W.W. Norton), doesn’t immediately sound like a compelling read.

Those two Israeli psychologists -- Daniel Kahneman and Amos Tversky -- grabbed Lewis’ attention when he discovered he should have known about them before he wrote “Moneyball.”

“I pride myself when I get into a story on seeing what the story is and shining the light in the right places. And I really missed something big when I was writing ‘Moneyball,’” he said.

“Moneyball,” made into a movie staring Brad Pitt, describes how Billy Beane, general manager of the Oakland A’s, built a winning team by ignoring the gut instincts of experienced major league scouts, and instead using data analysis to find good players who were undervalued by other teams.

“If they could be mis-valued by experts in valuing them, who’s not mis-valued?” Lewis said. “You’re probably mis-valued in some way.”

“Undervalued, for sure,” Blackstone agreed.

How can the gut instincts of apparent experts -- and all of us, for that matter -- so often be so wrong? That question is what Kahneman and Tversky studied for decades. It’s been said they changed the way we think about thinking.

“What they were engaged in right from the beginning was undoing a false view man has in himself, the view that the mind is somehow rational and untrickable and potentially infallible,” Lewis said. “They took dead aim at it, and they dealt it a death blow.”

What captivated Lewis was their relationship; they met in the psychology department at Hebrew University. Eventually, both moved to universities in North America.

Neither, on their own, was terribly disruptive, says Lewis, but together, “they were this combustible force” -- two brilliant minds that seemed completely different. “Amos Tversky is one of these rare characters who thought he was right about everything, and is right,” Lewis said. “He was a breathtakingly gifted mind and very, very, very sure of himself.”

Kahneman, though, is unsure of most everything. “Danny doesn’t trust his mind to the point where when they finished one of their papers, Amos would basically wait by the phone at 2:00 or 3:00 in the morning for Danny’s call, saying, ‘It’s all wrong, it’s gonna destroy our reputations, we can’t publish it,’” Lewis said.

Tversky died 20 years ago at the age of 59. Kahneman went on to win the Nobel Prize for integrating psychological research into economics.

In 2013 President Obama awarded him the Medal of Freedom.

“Now all of us have moments when we look back and wonder, ‘What the heck was I thinking?’” Mr. Obama said at the Medal of Freedom ceremony. “I have that quite a bit. Psychologist Daniel Kahneman has made that simple question his life’s work.”

Kahneman and Tversky showed that gut instinct is far from dependable. There was a lesson in that for Lewis himself, a man strongly self-confident.

“So the answer to that is yes, a little bit,” Lewis replied. “My wife would totally disagree! I mean, totally disagree. But I actually have taken this on board, that I am aware that I have very strong impulses that I often obey, and they’ve misled me in some cases, and it’s worked out in other cases. From my life story I can build a narrative that my gut is great and I should just follow it, because I forget the mistakes it led to, and I remember the successes.”

One success, “The Big Short,” about the mortgage crisis, was made into an Oscar-winning movie.

Lewis now lives in Berkeley, California, where the view, he says, “is part of the attraction, clearly.”

His first book, “Liar’s Poker,” was about his time in New York as a young bond trader on Wall Street. A large part of that book is how people are so irrational in the decisions they make.

“The foundation stone of ‘Liar’s Poker,’ and in some ways ‘The Undoing Project,’ was my astonishment that anybody would take my financial advice,” Lewis said. “I mean, really -- I was 24 years old, I was an art history major, I knew nothing about money.”

He was getting rich quick. But his gut instinct told him he’d be happier writing for a living. “It wasn’t even a decision. I mean, it looked insane to my father and to the people I worked for because they thought, you know, what are the odds that he’s going to make it as a writer?”

But make it, he did.

As a bestselling author, a perk he seems to enjoy most is having plenty of time to spend with his three children … including catching fastballs hurled by his 14-year-old daughter, and taking on his nine-year-old son and a couple of friends on the basketball court.

He also sponsors teams: “So for years, my kids’s teams were called ‘The Money Ballers’ or ‘The Blind Siders’ or ‘The Big Shorters’ -- I just put whatever book I was working on, on their jersey just for fun.”

Lewis figures “The Undoing Project,” like those books, has movie potential, too. The first hardbound copies arrived the day Blackstone visited.

“It looks great,” Lewis said. “I was worried it was going to be way too fat.”

He’s already thinking about his next book -- like something about raising children. The research for that he can do right in his own backyard.