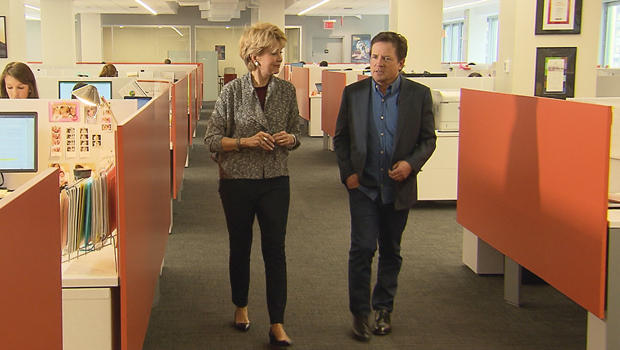 Actor Michael J. Fox is known to millions around the world for his work in the "Back to the Future" films, the TV series "Family Ties" and "Spin City," and more. But for the past two decades it's been his battle with Parkinson's disease, and his search for a cure, that may have generated the most attention.

Fox, 56, started noticing symptoms when he was 29, he says, and was diagnosed with early onset of the disease when he was 30. Looking back, he tells "CBS Sunday Morning" anchor Jane Pauley (in an interview to be broadcast on October 29) that sharing his battle publicly and joining with others to raise money has been a gift.

In a revealing interview, Fox opens up to Pauley about learning of his diagnosis; how he deals with the symptoms on a daily basis; and the work he's done through his Fox Foundation to raise nearly a billion dollars to fund Parkinson's research.

He says when he was diagnosed, he didn't know much about Parkinson's, except that "somebody's grandmother had it. I mean, it was not a thing that I noticed or thought about as this 29-year-old guy."  After the diagnosis, a doctor told him he had 10 years left to work, which shocked him at the time.

He's since gone on to continue acting (he won an Emmy Award in 2009 for his work on "Rescue Me") and has written three bestselling books.

A married father of four, Fox is focused on his foundation and seeking answers to Parkinson's. He's not expecting a cure within his lifetime, he says, but rather "vastly improved therapies."

Asked how he thinks people will remember him 50 years from now -- either for the "Back to the Future" movies or for finding a cure for Parkinson's -- Fox laughs, then turns serious.

"I had a moment with somebody and they said, 'Someday there's gonna be a cure for Parkinson's and it's gonna be because of you,'" Fox says, "and to me this was the first time that it really struck me.  And not that I took it seriously -- but I feel part of something that is much more special that if it happens, it's much more special than any movie or any TV show."