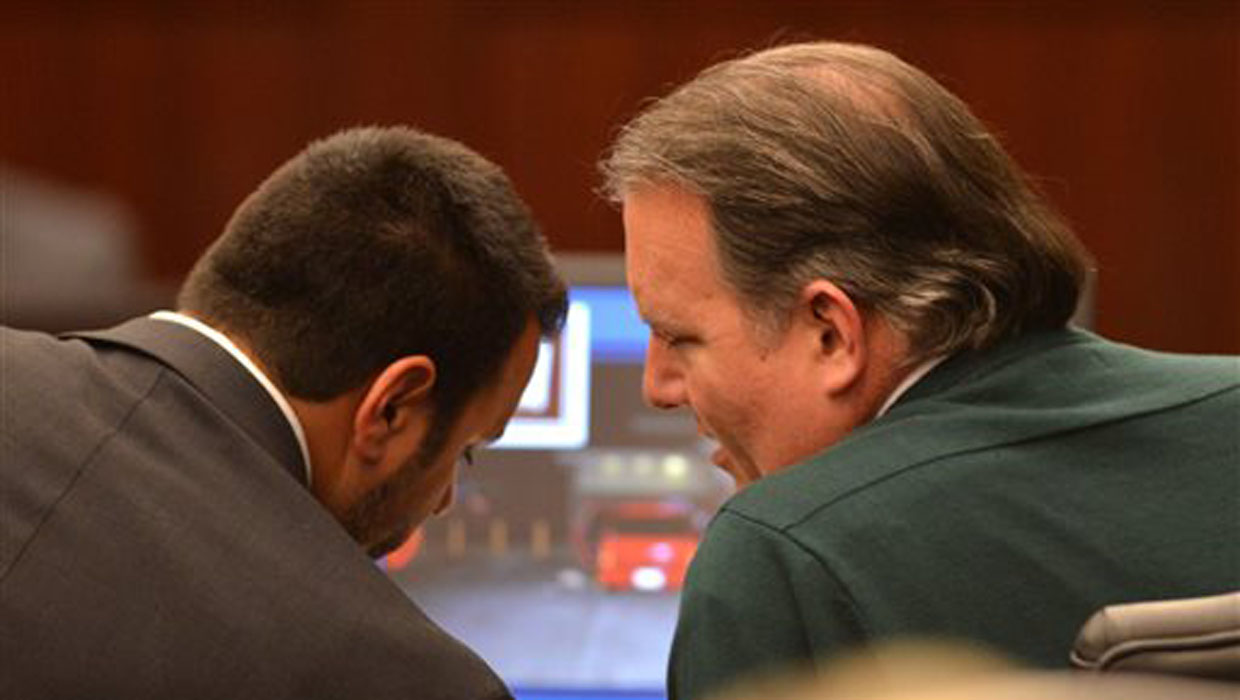 JACKSONVILLE, Fla. - Jurors saw dramatic photos of the body of slain Florida teenager Jordan Davis Monday during the trial of the man accused in his killing, Michael Dunn, and viewed clothing Davis was wearing the evening he was shot to death.

Dunn is accused of opening fire into a Dodge Durango in which the 17-year-old Davis was riding with three friends the night of Nov. 23, 2012. Dunn allegedly shot the teen at the Jacksonville, Fla. gas station after an argument over loud music.

Davis’ friend testified last week that Dunn said “Are you talking to me?” before opening fire. Dunn claims he shot in self-defense.

Before Simons took the stand Monday morning, a judge asked those in the courtroom to refrain from emotional outbursts during her testimony.

Simons said Davis was killed by “multiple gunshot wounds.” Davis’ family remained in the courtroom as she detailed the three bullet wounds found in Davis’ body. One bullet, she said, entered the right side of his chest and punctured his diaphragm, liver, lungs and aorta.

The bullet wound that pierced Davis’ chest “would have been fatal in a matter of minutes,” Simons testified. Two other wounds pierced Davis’ right and left thighs near his groin, she said.

She showed jurors clothing Davis was wearing, showing the bullet holes in the clothing she said were consistent with wounds on his body.

Simons used a mannequin to demonstrate for jurors the path bullets might have taken as they entered Davis’ body. She said Davis was most likely sitting in the rear right passenger seat of the Durango, leaning towards the left side of the car when he was fatally shot.

But in a combative cross-examination, defense attorney Cory Strolla asked whether Davis might have been standing outside the vehicle while he was shot. The position Davis was in when he was shot could be key as jurors determine whether Dunn shot in self-defense.

In his opening statement, Strolla told jurors that Davis was trying to get out of the Durango when Dunn shot him.

Maria Pagan, an analyst with the Florida Department of Law Enforcement, testified earlier in the day about the steps Dunn took before shooting the teen. Her testimony bolstered the contention from prosecutors that Michael Dunn acted with premeditation when he fatally shot Davis.

Jacksonville Sheriff's Office Detective Andrew Kipple testified Saturday that the location of nine bullet holes in the SUV showed that the Durango's driver and his front-seat passenger barely escaped being shot.

Authorities say Davis was parked in the Durango with three friends outside the store. Dunn and his fiancée had just left a wedding reception and were heading home when they stopped at the store and pulled up next to the SUV.

An argument began after Dunn told them to turn the music down, police said. One of Davis' friends lowered the volume, but Davis then told him to turn it back up.

According to authorities, Dunn became enraged and he and Davis began arguing. One person walking out of the convenience store said he heard Dunn say, "You are not going to talk to me like that."

Dunn, who had a concealed weapons permit, pulled a 9 mm handgun from the glove compartment, according to an affidavit, and fired multiple shots, striking Davis. No gun was found in the SUV.