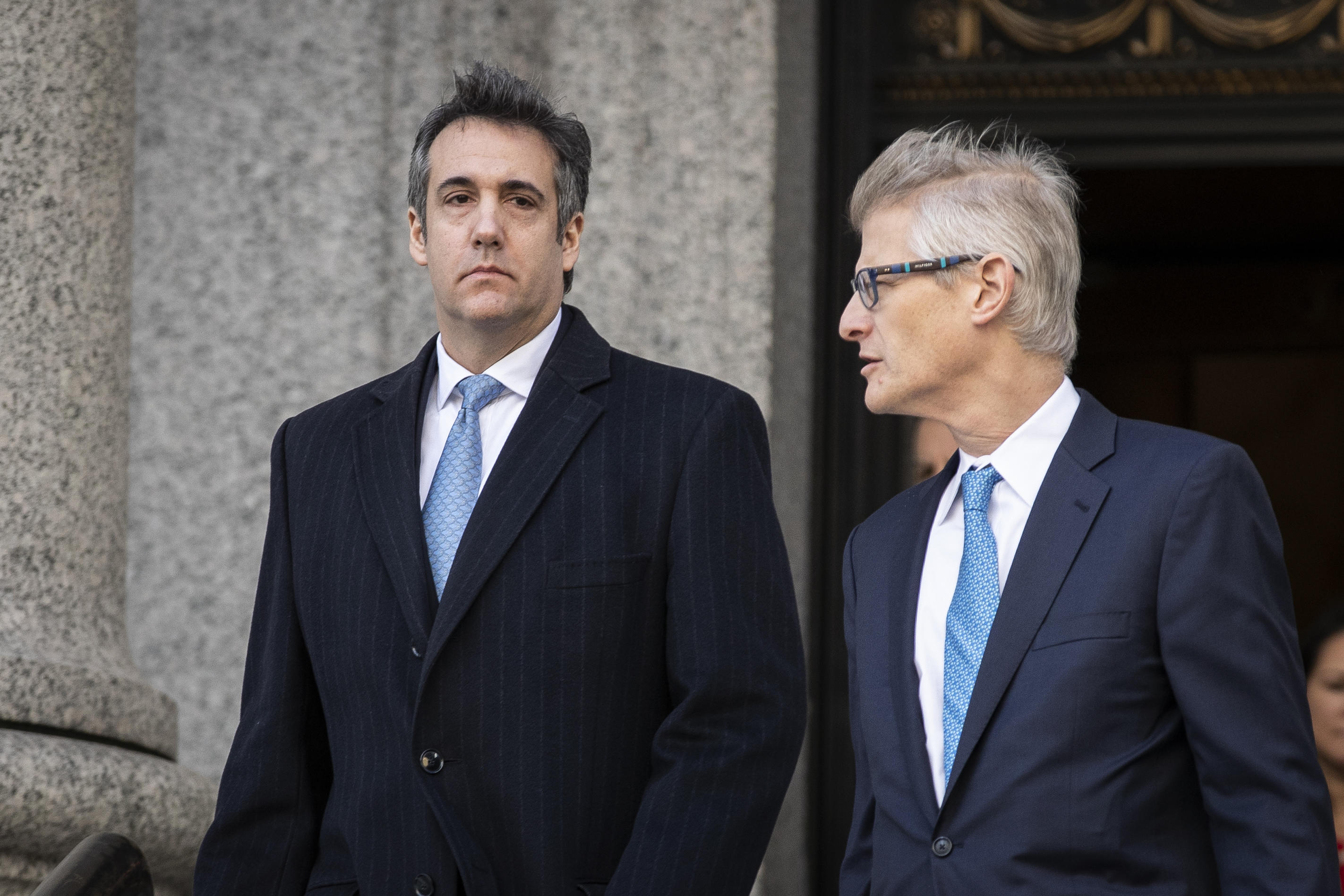 Lawyers for President Trump's former personal lawyer, Michael Cohen, say he should be spared prison for crimes he committed in an abundance of enthusiasm for his ex-boss, and they portrayed him to a judge as a hero for cooperating in a probe Mr. Trump has "regularly questioned publicly and stridently."

The lawyers said in court papers filed in New York late Friday that Cohen, 52, has cooperated extensively with Special Counsel Robert Mueller and New York state investigators who brought a civil lawsuit against the Trump Organization and individuals, including Trump.

They cited the fact he met with Mueller's team in "seven voluntary interview meetings" that began even before he pleaded guilty on Aug. 21 to campaign finance and bank frauds, among other charges, and continued through late November.

He pleaded guilty Thursday to lying to Congress, a charge that his lawyers said resulted in part from information he voluntarily provided Mueller's team in meetings governed by a limited-use immunity agreement. Cohen admitted to lying about how long he worked on developing a Trump Tower in Moscow.

Russian President Vladimir Putin's spokesman displayed what he says are two emails from Cohen asking for help getting the Trump Tower Moscow project off the ground.

Cohen last year acknowledged sending the emails to Kremlin spokesman Dmitry Peskov in January 2016, but said he killed the proposal after talking to Peskov's office. This week he confessed that he continued to pursue the deal on Trump's behalf during the heat of the campaign, through June 2016.

Peskov, who is with Putin at an international summit in Argentina, said Saturday, "We told them that the presidential administration isn't involved in construction projects, and if they are interested in making investments we will be glad to see them at St. Petersburg's economic forum." Peskov said they never heard from Cohen again.

"Michael's decision to cooperate and take full responsibility for his own conduct well reflects his personal resolve, notwithstanding past errors, to re-point his internal compass true north toward a productive, ethical and thoroughly law abiding life," Cohen's lawyers wrote.

They say he'll continue to cooperate, though he wants to be sentenced as scheduled on Dec. 12 so he can return to providing for his family.

Besides his cooperation with Mueller, Cohen has also provided the New York state attorney general's office with documents "concerning a separate open inquiry," the lawyers wrote. They said he also has provided information to the New York State Department of Taxation and Finance.

Cohen's lawyers sought to address speculation over why their client has not entered into a formal cooperation agreement with prosecutors, saying Cohen was concerned that such a deal would delay his sentencing, which is scheduled for Dec. 12.

"This personal decision does not signal any intention on Michael's part to withhold information or his availability to respond to additional inquiry. To the contrary, he expects to cooperate further," the lawyers wrote. "But, following the execution of search warrants in this case, nearly every professional and commercial relationship that he enjoyed, and a number of long-standing friendships, have vanished."

The lawyers portrayed Cohen as courageous for cooperating in Mueller's probe while the "investigation — and the rationale for its very existence — is regularly questioned publicly and stridently by the President of the United States."

"In the context of this raw, full-bore attack by the most powerful person in the United States, Michael, formerly a confidante and adviser to Mr. Trump, resolved to cooperate, and voluntarily took the first steps toward doing so even before he was charged," the lawyers wrote. "He took these steps, moreover, despite regular public reports referring to the President's consideration of pardons and pre-pardons in the SCO's investigation."

They said Cohen viewed Mueller's investigation to be "thoroughly legitimate and vital" and added that he "could have fought the government and continued to hold to the party line, positioning himself perhaps for a pardon or clemency." They said he cooperated for "himself, his family and his country." Cohen has been married for 24 years. He has two children, ages 23 and 19.

Cohen's lawyers — Guy Petrillo and Amy Lester — said Cohen and his family have faced threats of physical harm which have been referred to authorities.

The lawyers, in a document that sometimes referred to Mr. Trump as "Client-1," said Cohen committed campaign finance fraud and made false statements out of a "fierce loyalty" to Mr. Trump and at his direction.

"Michael regrets that his vigor in Client-1′s interests in the heat of political battle led him to abandon good judgment and cross legal lines," they said.

They said prison would be inappropriate given hardships Cohen faces, including loss of his law license, Internal Revenue Service civil penalties and restitution, his likely inclusion as a defendant in a tax case by New York State, the loss of his consulting firm's business and the cancellation of numerous banking credit card and insurance agreements.

Prosecutors have not yet filed a pre-sentence submission but have agreed to note Cohen cooperation to the sentencing judge.