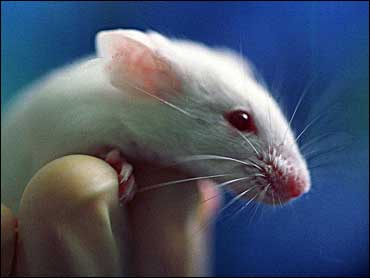 Songbirds may be the Frank Sinatras of the animal world, but male mice can carry a tune too, say Washington University researchers who were surprised by what they heard.

Scientists have known for decades that male lab mice produce high-frequency sounds, undetectable by human ears, when they pick up the scent of a female mouse. This high-pitched babble is presumably for courtship, although scientists are not certain.

But it turns out those sounds are more complex and interesting than previously thought.

"It soon became ... apparent that these vocalizations were not random twitterings but songs," said researcher Timothy Holy. "There was a pattern to them. They sounded a lot like bird songs."

To make their point, the researchers provided audio recordings of the sounds, which have been modified for human ears. The recordings do indeed sound birdlike.

The findings by the researchers at Washington University School of Medicine in St. Louis are published online Tuesday in the journal Public Library of Science Biology.

If the analysis by the researchers is confirmed, mice can be added to the short list of creatures that sing in the presence of the opposite sex, including songbirds, humpback whales, porpoises, insects and, possibly, bats.

"There was joy in this discovery," Holy said. "We didn't expect it."

The finding opens the possibility of using mice to study and develop treatments for autism and other communication disorders, said Holy, the lead author and assistant professor of neurobiology and anatomy at the university's medical school.

Bird song, how it is perceived and learned, is used to understand how the human brain works. But some questions might be posed better with mice, for experimental convenience, he said.

If it is true that the male mice are producing songs, it raises questions about how their sounds develop and whether mice, like birds, are able to learn new sounds, said animal communication expert Peter Marler, a behavioral neurobiologist at University of California, Davis.

He said "extraordinarily little" is known about how the human brain helps people learn to speak.

"We don't know even where to look in the (human) brain," he said. "If it were to turn out that (mice) songs are learned, and that parts of the brain are involved in learning, that might open a new area of investigation."

Marler said the only mammals known to learn new sounds are whales and porpoises, and "they're not exactly ideal for study."

Holy and co-author Zhongsheng Guo were studying the brain response in male mice to chemical signals emitted by female mice. The mice sounds were not audible to humans without technical amplification. Initially, researchers recorded the sounds with a microphone, stored them in a computer and converted them to an image.

Later, they developed a way to hear the sounds by recording them on tape and reconstructing them four octaves lower. Holy said the mice sounds met two key criteria for song, distinct syllables and recurring themes, "like the melodic hook in a catchy tune."

He said their finding is not just perception, but a "very careful quantitative analysis of sounds."

Holy said adult bird songs are much more practiced, predictable and refined than those of mice, but even birds don't start out as great singers. They learn.