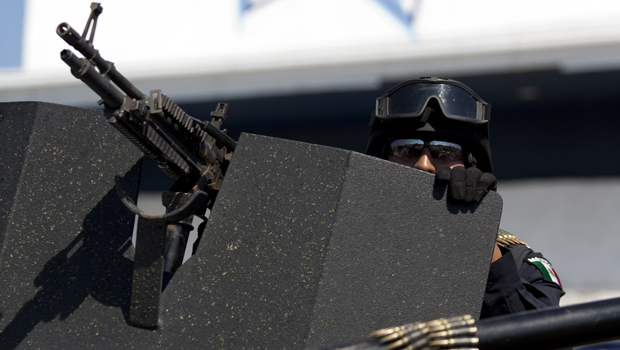 APATZINGAN, Mexico -- Federal forces struggled to bring order to western Mexico Wednesday as vigilantes battled a vicious drug cartel that apparently tried to reassert its authority by burning a downtown pharmacy to enforce its orders that no businesses should open.

The fire attack came just two blocks from the Apatzingan city center where, the day before, dozens of federal police had paraded in an impressive display of force meant to re-impose order in a region where heavily armed vigilantes have taken up a freelance fight against the drug gang.

An employee of the pharmacy said two men pulled up with jerry cans of gasoline and began dousing the store and its merchandise. "They just told us to get out, because they were going to burn the place," she said.

The employee, part of whose hair was burned off in the attack, refused to give her name for fear of reprisals.

Owners of other stores have said that cartel gunmen have ordered them to close or risk being burned down. Another pharmacy employee, who gave her name only as Norma, said the increased federal security that arrived this week appeared to have done little to discourage the Knights Templar cartel, which has subjected local residents to systematic extortion for years.

"They don't do anything," she said, gesturing to the truckloads of heavily armed federal police who pulled up after the fire had been extinguished. "They come after everything has already been burned."

But federal forces have other challenges, as well. The local police in Apatzingan were considered so untrustworthy that the entire 300-man force was relieved of duty and sent out of town for background checks.

And heavily armed vigilantes have taken town after town nearby, defying a federal order to lay down their arms and vowing to continue their battle to kick the cartel out of the violence-wracked farming area of western Mexico

Officials from the federal and Michoacan state governments met until late Tuesday with leaders of "self-defense" groups.

While refusing to give up their weapons, vigilante leaders appeared to be seeking a cooling of tensions.

"We have to be discreet with our weapons and not move up and down the highways with them," said Hipolito Mora, a lime grower who leads the self-defense group in the town of La Ruana, after the meeting.

Interior Secretary Miguel Angel Osorio Chong confirmed the talks had taken place, and said the government was offering jobs as police to qualified members of the self-defense forces.

The spokesman for the vigilante movement, Estanislao Beltran, previously said the vigilantes weren't interested in such offers. "We don't want jobs as policemen. We're fighting for the freedom of our families," he said.

The talks came after soldiers clashed with townspeople in Antunez, where at least two men were reportedly killed during the confrontation that began late Monday. Video of the clash aired by Milenio Television showed a chaotic scene in which angry townspeople scuffled with soldiers and apparently tried to grab the gun and equipment of at least one soldier.

The unrest is in a region of Michoacan known as Tierra Caliente, a farming area rich in limes, avocados and mangos where vigilante groups have been trying to drive out the Knights Templar drug cartel. After a weekend of firefights, the government announced Monday that it would take on security duties in the area.

Throughout Tuesday, federal police officers and soldiers set up roadside checkpoints just yards from roadblocks manned by vigilantes on routes into towns controlled by self-defense groups, but there were no attempts to take weapons from the civilians.

One federal officer who was not authorized to speak to the press said they had no orders to disarm anyone, or to try to take towns held by vigilantes, who have surrounded Apatzingan, which is said to be a Knights Templar stronghold.

Hundreds of federal police officers poured into Apatzingan, the region's main city, in pickup trucks mounted with machines guns, armored vehicles and buses. They massed in the city's main square.

The Rev. Gregorio Lopez, a parish priest in Apatzingan's Roman Catholic diocese, watched the display of force, but brushed it off as "just a show."

"Police sent in from outside don't know where the criminals are," Lopez said. "We know of 10 warehouses where they are hiding armed men. They (federal police) aren't going to find them."

Critics have suggested that some self-defense groups have been infiltrated by the rival New Generation cartel, which the vigilantes vehemently deny.

After initially arresting vigilantes months ago, the federal government has appeared to be working with them recently. The army and federal police have provided helicopter cover and road patrols while self-defense groups attacked the cartel, but never intervened in the battles.

"Last week they were protecting the vigilantes," said Hope, director of security policy at the Mexican Competitiveness Institute. "Now they're going to put them down with firepower and bloodshed?"

Self-defense group leaders said they were coordinating the highway blockades in the 17 municipalities they control to keep out soldiers and federal police.

Felipe Diaz, a leader of vigilantes in Coalcoman, said close to 1,000 men, women and children helped block the main highway until soldiers and dozens of federal police in four buses and 15 pickup trucks left the area.

"We're still providing security to our people," Diaz said. "We're talking to them, telling them everything is OK, everything is calm."