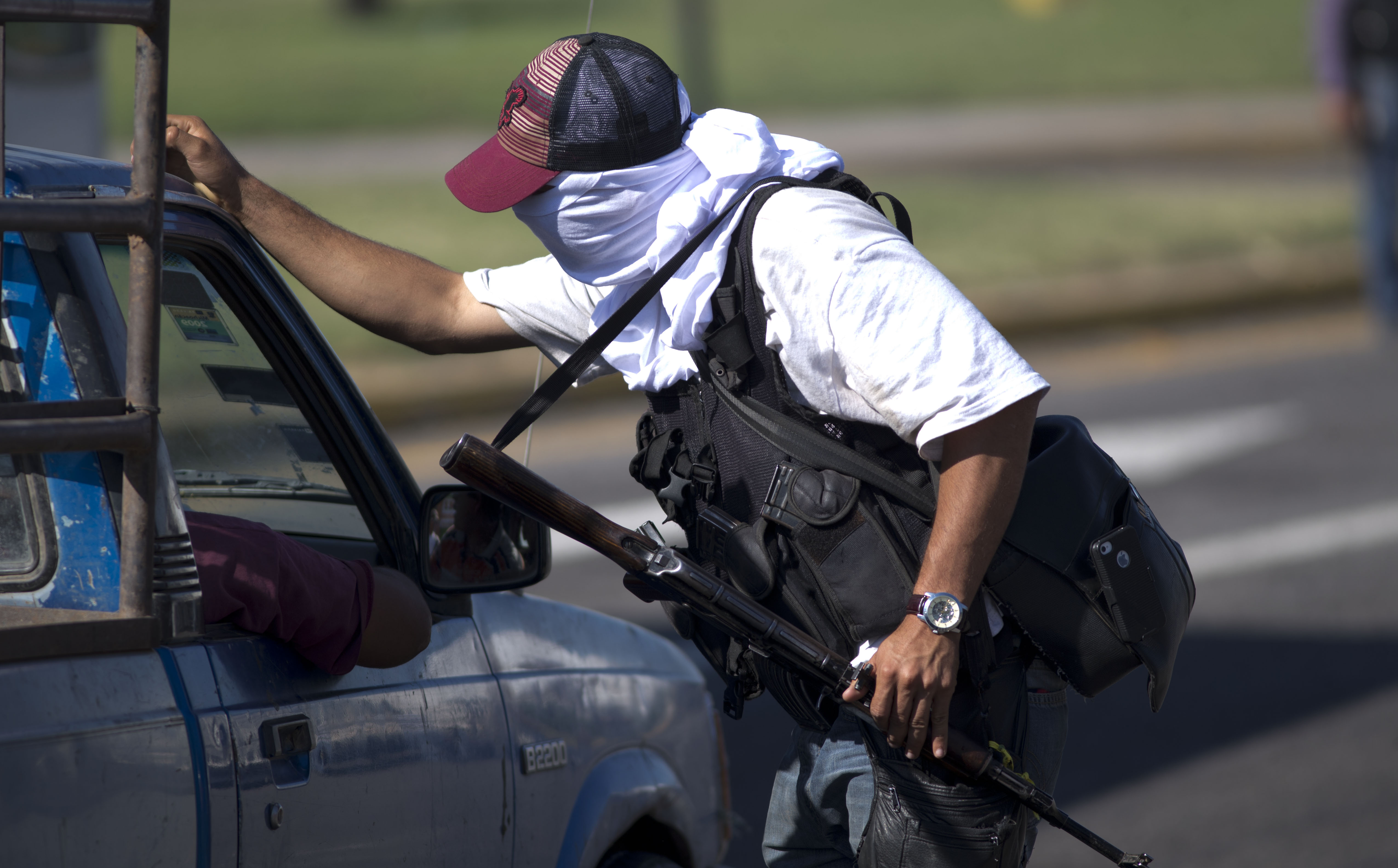 NUEVA ITALIA, Mexico -- The Mexican military and vigilantes clashed early Tuesday as soldiers tried to disarm groups who say they are fighting a local crime cartel.

A spokesman for the vigilantes said the military opened fire on civilians and killed four people, including an 11-year-old girl. But the Attorney General's Office said it could not confirm any casualties.

The government sent troops to retake an area known as the Tierra Caliente after days of violence between the so-called self-defense groups and the Knights Templar cartel.  Defense group spokesman Estanislao Beltran said the confrontation with the military occurred near the town of Antunez early Tuesday, when soldiers arrived at a citizens' roadblock to take their arms. The locals would not allow the soldiers to pass.

"They opened fire on civilians. How it that justified?" Beltran told MVS radio.

He told The Associated Press that only one of the dead was a self-defense group member.

Interior Minister Jose Osorio Chong announced a federal takeover of the area on Monday and urged the vigilantes to put down their arms and return to their home towns. The troops moved in shortly after.

Beltran said the confrontation was with about 60-80 soldiers.

He said the self-defense groups will not put down their arms because they will be killed by the cartel.

"We don't have confidence in the government," he said. "We've asked for help for years and have received the same. The government is compromised by organized crime."

He has also said they won't give up until the government captures the leaders of the cartel.

He made his announcement Monday after a meeting called by Michoacan state Gov. Fausto Vallejo following a weekend of firefights as the self-defense groups expanded their control to Antunez, Paracuaro and Nueva Italia. The area exploded gunfire and burned trucks and buses blocking highways.

Two bodies were found hanging from a bridge.

Soldiers and federal police were in the area during the conflict but focused on keeping roads open and did not intervene in the fighting. The government seemed to work in concert with the vigilantes in recent months, and self-defense leaders have said they were getting support from soldiers and federal police, something the Mexican government denies.

The vigilantes have surrounded the farming hub of Apatzingan, considered the command post of the Knights Templar, and but had said they were not going into the main city at the request of the army.

Almost every store was closed in Apatzingan on Monday and there were few people on the street and little police presence.

Shopkeepers said they were afraid to open after gunmen believed to be working for the Knights Templar cartel threw firebombs at several of the city's businesses and city hall over the weekend.

Rumors circulate that some self-defense groups have been infiltrated by the New Generation cartel, which is reportedly fighting a turf war with the Knights Templar in the rich farming state that is a major producer of limes, avocados and mangos. The self-defense groups vehemently deny that.

In an odd twist to the story, the coordinator of the vigilantes, Dr. Jose Manuel Mireles, appeared in a video on the Televisa network late Monday night saying he agreed with the federal government's move to control the area and urged fellow vigilantes to heed Osorio Chong and return to their daily lives.

Mireles is recovering from an airplane accident earlier this month in an undisclosed location and has been under heavy Federal Police protection. Many criticized the government for not arresting him, as the vigilantes are breaking Mexican law, including using high-caliber arms that are only legal for the military.

He face was swollen and he spoke slowly, as if under sedation.

Later, in a second video, Mireles appeared more alert and contradicted what he said on Televisa. He told reporters he is not advocating the laydown of arms until the entire state of Michoacan is free of organized crime and operating under the rule of law.