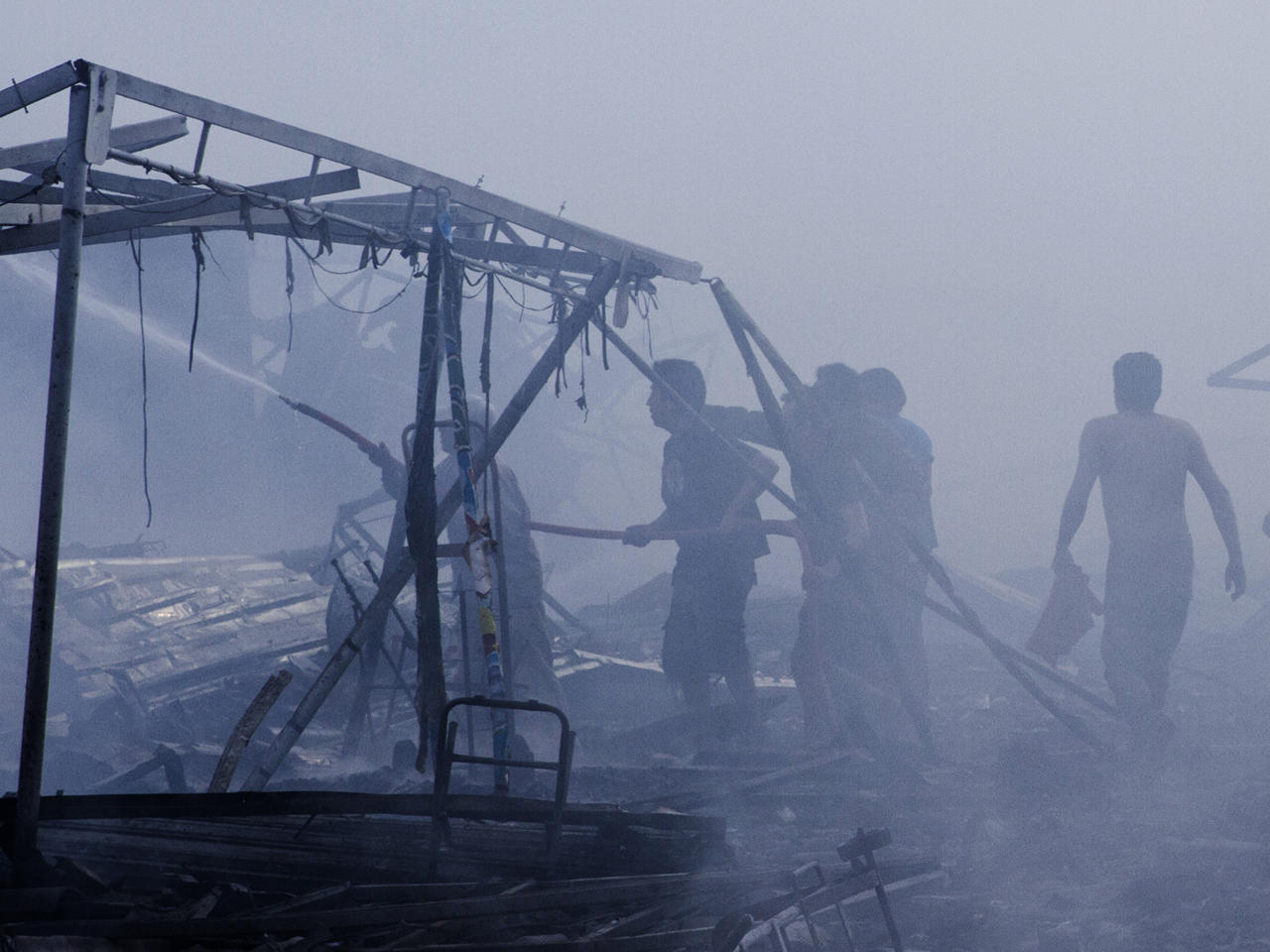 TULTEPEC, Mexico -- The San Pablito fireworks market was especially well stocked for the holidays and bustling with hundreds of shoppers when a powerful chain-reaction explosion ripped through its stalls, killing at least 31 people and leaving dozens more badly burned.

The third such blast to ravage the market on the northern outskirts of Mexico’s capital since 2005 sent up a towering plume of smoke that was lit up by a staccato of bangs and flashes of light. Once the smoke cleared, the open-air bazaar was reduced to a stark expanse of ash, rubble and the charred metal of fireworks stands, casting a pall over the country’s Christmas season.

Mexico State health officials said 72 people were being treated for injuries from Tuesday’s explosion, including for severe burns, in some cases over 90 percent of their bodies. Ten children were among the hospitalized. Authorities have not yet said what may have caused the explosions which took place in Mexico State, which rings the capital.

Three of the children hurt in the explosion are being sent to Galveston, Texas, to be treated for their burns.

Survivor Crescencia Francisco Garcia said she was in the middle of the grid of stalls when the thunderous explosions began. She froze, reflexively looked up at the sky and then took off running through the smoke once she realized everyone was doing so. As she ran she saw people with burns and cuts, and lots of blood.

Mexico State Gov. Eruviel Avila reported Tuesday night that in addition to the 26 people who perished at the market, three more victims died later in hospitals. Mexican newspapers reported Wednesday morning that the death toll had risen to at least 31, with some outlets putting it as high as 36, citing local officials.

“We are going to identify who is responsible,” Avila said.

Sirens wailed and a heavy scent of gunpowder lingered in the air well after the thunderous explosions at the market, which were widely seen in a dramatic video. The smoking, burned out shells of vehicles ringed the perimeter, and first responders and local residents wearing blue masks over their mouths combed through the ash and debris. Firefighters hosed down still-smoldering hotspots.

Cesar Ornelas of Atizapan de Zaragoza was only 10 minutes into shopping with his son and his father when he heard the first explosions. He tried to run, but something knocked him to the ground from behind. He tried several times to get up, unsuccessfully, and ultimately his 15-year-old son Francisco had to drag him out.

“We didn’t look back,” said Ornelas, who suffered light burns and a large bruise over his left kidney. His white tank top had a fist-size burn on the chest. “We heard how the explosion was kind of going off bit by bit.”

Nearly four hours later, he and Francisco limped gingerly out of the market area. Francisco said paramedics told him his leg was likely fractured by flying debris. Ornelas said his 67-year-old father, Ernesto, had run in a different direction and sought refuge in a nearby home. All the father’s clothing was burned, and his face and arm were bloodied. An ambulance had spirited him to a hospital, but Ornelas wasn’t sure where it was or how serious his injuries were.

“My condolences to the families of those who lost their lives in this accident and my wishes for a quick recovery for the injured,” President Enrique Pena Nieto said via Twitter.

A similar fire engulfed the San Pablito Market in 2005, touching off a chain of explosions that leveled hundreds of stalls just ahead of Mexico’s Independence Day. A year later a similar incident at the same market also destroyed hundreds of stands.

Portuguez, the Tultepec mayor, said the manufacture and sale of fireworks is a key part of the local economy. He added that it is regulated by law and under the “constant supervision” of the Defense Department, which oversees firearms and explosives.

“This is part of the activity of our town. It is what gives us identity,” Portuguez said. “We know it is high-risk, we regret this greatly, but unfortunately many people’s livelihoods depend on this activity.”

Deadly fireworks explosions have occurred with some regularity in Mexico: In 2002, a blast at a market in the Gulf coast city of Veracruz killed 29; in 1999, 63 people died when an explosion of illegally stored fireworks destroyed part of the city of Celaya; and in 1988, a fireworks blast in Mexico City’s La Merced market killed at least 68.