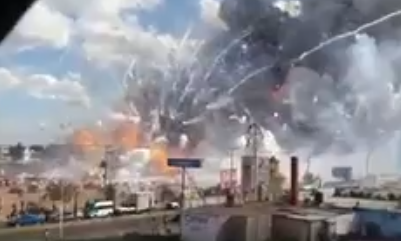 MEXICO CITY -- The San Pablito fireworks market was especially well stocked for the holidays and bustling with hundreds of shoppers when a powerful chain-reaction explosion ripped through its stalls, killing at least 31 people and leaving dozens more badly burned.

The third such blast to ravage the market on the northern outskirts of Mexico’s capital since 2005 sent up a towering plume of smoke that was lit up by a staccato of bangs and flashes of light. Once the smoke cleared, the open-air bazaar was reduced to a stark expanse of ash, rubble and the charred metal of fireworks stands, casting a pall over the country’s Christmas season.

Here are the latest updates:

11:57 p.m. ET: State Health Secretary Cesar Nomar Gomez Monge said 72 people were being treated for injuries including severe burns, in some cases over 90 percent of their bodies. Those hospitalized included 10 children.

Authorities said an investigation into the tragedy had been opened.

“We are going to identify who is responsible,” Gov. Eruviel Avila said.

Video of the blast showed a dramatic staccato of rockets exploding in flashes of light, leveling the open-air San Pablito Market in Tultepec in Mexico State as it bustled with shoppers stocking up on fireworks to celebrate Christmas and New Year’s.

Vendors’ stands were reduced to piles of rubble, ash, and charred metal. It was the third devastating explosion and fire to ravage the market since 2005 and officials still have not said what caused this latest blast.

9:40 p.m. ET: The governor of the State of Mexico says three more people have died from a massive chain-reaction at a fireworks market near the capital, raising the death toll to 29.

Gov. Eruviel Avila says that in addition to the 26 people who perished at the market, three more died after being hospitalized.

The San Pablito fireworks market was bustling with hundreds of shoppers stocking up on explosives to set off during the holidays when the explosion took place.

It is the third such blast to ravage the market on the northern outskirts of the capital since 2005.

8:52 p.m. ET: Mexico State Gov. Eruviel Avila said in an interview with FORO TV that “Mexico is in mourning.”

8:36 p.m. ET: Witness Crescencia Francisco Garcia said she was in the middle of the grid of stalls along with a few hundred others when the thunderous explosions began. She froze, reflexively looked up at the sky and then took off running through the smoke once she realized everyone was doing so. As she ran she saw people with burns and cuts, and lots of blood.

Cesar Ornelas of Atizapan de Zaragoza was only 10 minutes into shopping with his son and his father when he heard the first explosions. He tried to run, but something knocked him to the ground from behind. He tried several times to get up, unsuccessfully, and ultimately his 15-year-old son Francisco had to drag him out.

“We didn’t look back,” said Ornelas, who suffered light burns and a large bruise over his left kidney. His white tank top had a fist-size burn on the chest. “We heard how the explosion was kind of going off bit by bit.”

Nearly four hours later, he and Francisco limped gingerly out of the market area. Francisco said paramedics told him his leg was likely fractured by flying debris. Ornelas said his 67-year-old father, Ernesto, had run in a different direction and sought refuge in a nearby home. All the father’s clothing was burned, and his face and arm were bloodied. An ambulance had spirited him to a hospital, but Ornelas wasn’t sure where it was or how serious his injuries were.

8:03 p.m. ET:  As more reports come in from the scene, the death toll remains in flux. The chief prosecutor of Mexico State told the Associated Press that 26 people have been killed in an explosion that tore through a fireworks market near Mexico City.

The blast leveled stalls and left rescue workers to comb through ash and charred metal.

Similar fires and explosions destroyed hundreds of stands in two other incidents at the same market in 2005 and 2006.

7:07 p.m. ET: President Enrique Pena Nieto tweeted his condolences to the family of the victims.

“My condolences to the families of those who lost their lives in this accident and my wishes for a quick recovery for the injured,” Nieto tweeted.

Sirens wailed and a heavy scent of gunpowder lingered in the air after the afternoon blast at the market, where most of the fireworks stalls were completely leveled. The smoking, burned out shells of vehicles ringed the perimeter, and first responders and local residents wearing blue masks over their mouths combed through the rubble and ash. Firefighters hosed down still-smoldering hotspots.

6:40 p.m. ET: Witnesses described the chaotic scene at the market.

Crescencia Francisco Garcia arrived in the afternoon to buy fireworks and said she was near the middle of the grid of stalls when the explosions began around 2:30 p.m.

“All of a sudden it started booming,” the 41-year-old Mexico City resident said. “I and the others surrounding me all took off running.”

Eventually Garcia was able to find her daughter, son-in-law and three grandchildren who were waiting in a car just inside the perimeter fence.

Fireworks continued to pop off long after the blast, and National Civil Protection Coordinator Luis Felipe Puente added that there was no choice but to let any unexploded fireworks be consumed.

6:37 p.m. ET: Images started to come in from the aftermath of the explosion, showing the scale of the destruction to the market.

There were up to 2,000 people at the market at the time of the explosion, CBS News’ Michelle Miller reported.

6:23 p.m. ET: The number of deaths remained fluid in the aftermath of the explosion. While Azteca TV, citing the mayor of Tultepec, where market is located, reported that 12 people were dead, federal police tweeted out that nine people were confirmed dead.

6:00 p.m. ET: National Civil Protection Coordinator Luis Felipe Puente told Milenio TV that some nearby homes were also damaged. The scene remained dangerous and he asked people not to come within 3 miles to avoid danger or hampering the emergency response. Puente added that there was no choice but to let any unexploded fireworks burn off.

The Mexican Red Cross said it sent 10 ambulances with 50 paramedics to the market, where emergency crews attended to victims and hosed down smoldering hotspots as sirens wailed and fireworks continued to pop off.

Original story: An explosion has ripped through Mexico’s best-known fireworks market on the northern outskirts of the capital.

Azteca TV, citing the mayor of Tultepec, where market is located, reported that 12 people were dead. State police said that least 70 wounded, according to Mexico’s leading newspaper, Reforma.

Images broadcast by Milenio TV on Tuesday afternoon show a huge plume of smoke billowing into the sky above the open-air San Pablito Market in Tultepec, in the State of Mexico. Video obtained from social media also showed sparks and flames shooting through the air.

In 2005, a fire engulfed the same market, touching off a chain of explosions that leveled hundreds of stalls just ahead of Mexico’s Independence Day. A similar fire at the San Pablito Market also destroyed hundreds of stands in September 2006.

Many in Mexico traditionally celebrate holidays - including Christmas and New Year’s - by setting off noisy firecrackers and rockets.